Download this LitChart! (PDF)
Teachers and parents! Struggling with distance learning? Our Teacher Edition on Tsotsi can help.

Welcome to the LitCharts study guide on Athol Fugard's Tsotsi. Created by the original team behind SparkNotes, LitCharts are the world's best literature guides.

A concise biography of Athol Fugard plus historical and literary context for Tsotsi.

A quick-reference summary: Tsotsi on a single page.

In-depth summary and analysis of every chapter of Tsotsi. Visual theme-tracking, too.

Explanations of Tsotsi's symbols, and tracking of where they appear.

An interactive data visualization of Tsotsi's plot and themes.

Athol Fugard was born in 1932 in Middelburg, in the Eastern Cape of South Africa. His father was an Englishman, while his mother was an Afrikaner, a member of South Africa’s white minority population whose mostly Dutch ancestors colonized the country in the 18th century. After attending but not graduating from the University of Cape Town, he worked outside South Africa in 1953 and 1954, during which time he began writing. After returning to South Africa, Fugard worked as a clerk in a Native Commissioners’ Court—a court where white judges passed judgments on Black South Africans—and came to realize how racist South Africa’s laws and society were. Fugard married the actress Sheila Meiring in 1956 and in 1957, they settled in Johannesburg. In the late 1950s, Fugard wrote several plays that took South African racism as a theme and worked with Black South African actors to produce them. From 1960 to 1962, while also writing his famous early play The Blood Knot (1961), Fugard drafted the novel that would become Tsotsi. He did not try to publish it, however, and after ceasing work on it, he refocused on his playwriting. In 1973, the National English Literary Museum (NELM)—a museum for South African literature in Grahamstown, South Africa—began collecting Fugard’s manuscripts and papers. NELM’s Fugard collection ultimately included the unpublished drafts of Tsotsi. In the late 1970s, a South African English professor named Stephen Gray found Tsotsi in NELM and persuaded Fugard to let him revise it for publication. Tsotsi was finally published in 1980. Although Tsotsi is Fugard’s only novel, Fugard has continued writing plays continuously from the late 1950s through the present day.
Get the entire Tsotsi LitChart as a printable PDF.
"My students can't get enough of your charts and their results have gone through the roof." -Graham S.
Download 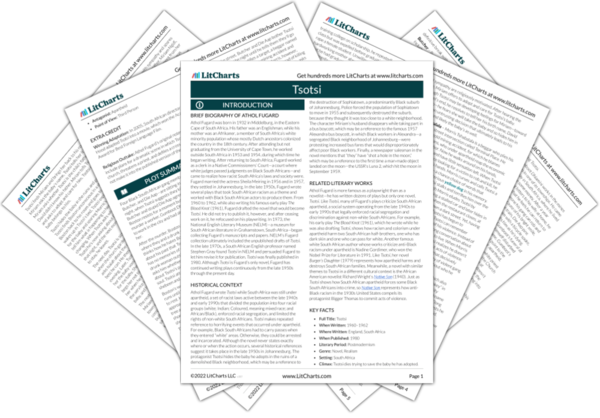 Athol Fugard wrote Tsotsi while South Africa was still under apartheid, a set of racist laws active between the late 1940s and early 1990s that divided the population into four racial groups (white; Indian; Coloured, meaning mixed race; and African/Black), enforced racial segregation, and limited the rights of non-white South Africans. Tsotsi makes repeated reference to horrifying events that occurred under apartheid. For example, Black South Africans had to carry passes when they entered “white” areas. Otherwise, they could be arrested and incarcerated. Although the novel never states exactly where or when the action occurs, several historical references suggest it takes place in the late 1950s in Johannesburg. The protagonist Tsotsi hides the baby he adopts in the ruins of a demolished Black neighborhood, which may be a reference to the destruction of Sophiatown, a predominantly Black suburb of Johannesburg. Police forced the population of Sophiatown to move in 1955 and subsequently destroyed the suburb, because they thought it was too close to a white neighborhood. The character Miriam’s husband disappears while taking part in a bus boycott, which may be a reference to the famous 1957 Alexandra bus boycott, in which Black workers in Alexandra—a segregated Black neighborhood of Johannesburg—were protesting increased bus fares that would disproportionately affect poor Black workers. Finally, a newspaper salesman in the novel mentions that “they” have “shot a hole in the moon,” which may be a reference to the first time a man-made object landed on the moon—the USSR’s Luna 2, which hit the moon in September 1959.

Other Books Related to Tsotsi

Athol Fugard is more famous as a playwright than as a novelist—he has written dozens of plays but only one novel, Tsotsi. Like Tsotsi, many of Fugard’s plays criticize South African apartheid, a social system operating from the late 1940s to early 1990s that legally enforced racial segregation and discrimination against non-white South Africans. For example, his early play The Blood Knot (1961), which he wrote while he was also drafting Tsotsi, shows how racism and colorism under apartheid harm two South African half-brothers, one who has dark skin and one who can pass for white. Another famous white South African author whose works criticize anti-Black racism under apartheid is Nadine Gordimer, who won the Nobel Prize for Literature in 1991. Like Tsotsi, her novel Burger’s Daughter (1979) represents how apartheid harms and destroys South African families. Meanwhile, a novel with similar themes to Tsotsi in a different cultural context is the African American novelist Richard Wright’s Native Son (1940). Just as Tsotsi shows how South African apartheid forces some Black South Africans into crime, so Native Son represents how anti-Black racism in the 1930s United States compels its protagonist Bigger Thomas to commit acts of violence.
Key Facts about Tsotsi

Religious Outtake: Athol Fugard’s original notes for Tsotsi include plans for a dramatic scene in which Tsotsi enters a church, threatens a priest, and defiles a cross. This scene did not make it into the published version of the novel. 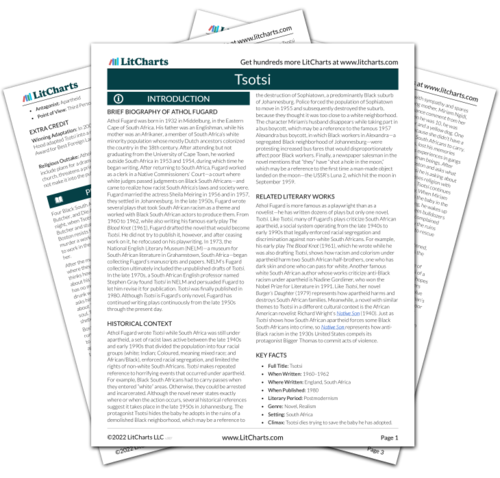 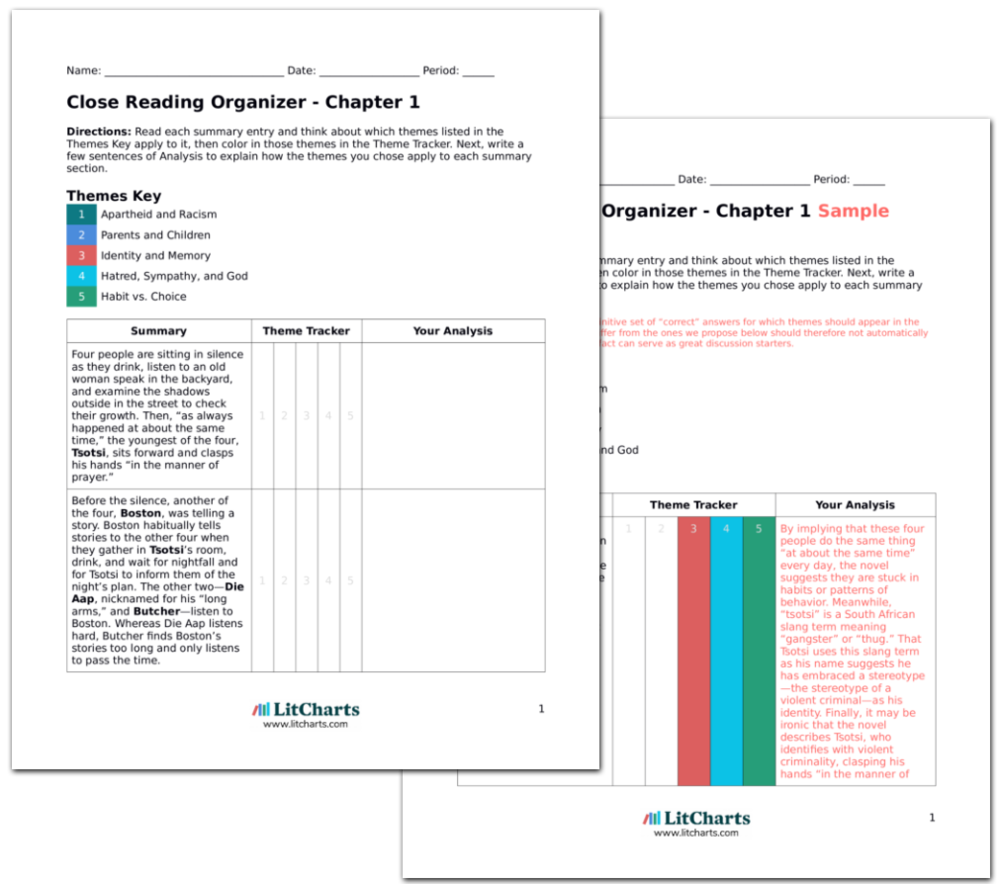