On a dark Spring night, all the townspeople of Llareggub, a small fishing village, are fast asleep. Two omniscient narrators, First Voice and Second Voice invite the listener to gaze inside the townspeople’s dreams. Captain Cat, a blind, retired sea captain, is tormented by visions of drowned shipmates and his former lover, Rosie Probert. Mr. Mog Edwards, the draper, and Miss Myfanwy Price, the sweetshop-keeper and dressmaker, have romantic dreams about each other. Mr. Waldo, a notorious drunkard, dreams of his childhood and failed marriages. Mrs. Ogmore-Pritchard, who runs a boarding house and is obsessively clean, dreams about ordering around her deceased husbands. Butcher Beynon dreams of hunting, while Mrs. Beynon dreams her husband is arrested for selling questionable meats. Lily Smalls (Mrs. Beynon’s maid) dreams of romance. Dai Bread, the baker with two wives, dreams of “harems.” Polly Garter, a single mother with many children, dreams of “babies,” and Jack Black, the cobbler, dreams of antagonizing young couples in Milk Wood, the small, wooded area on Llareggub Hill where lovers’ trysts occur. Mr. Pugh, the schoolmaster, dreams of poisoning his dreadful wife, Mrs. Pugh, and Reverend Eli Jenkins dreams of Eisteddfodau, a Welsh village festival of poetry and music.

The play continues in this manner, with First Voice and Second Voice introducing each character by describing the contents of their dreams. As the sky grows lighter, a Voice of a Guide-Book interrupts First Voice and Second Voice’s narrative to provide more background information about Llareggub, describing the small fishing village as “decaying” and unremarkable at first glance, though a “contemplative” outsider might appreciate Llareggub’s nostalgic atmosphere and the unique, eccentric personalities of its citizens.

When morning arrives, the townspeople begin their daily routines. Reverend Eli Jenkins opens his door and delivers a poetic sermon on his love of his town. Lily Smalls daydreams about romance and laments her mundane existence. Mr. Pugh daydreams about poisoning Mrs. Pugh, who is busy gossiping about the neighbors. Mrs. Cherry Owen fills Cherry Owen in on his drunken antics. Butcher Beynon teases his wife about the source of the meats they eat. Mary Ann Sailors, an old, religious woman, opens her window and declares her exact age (85 years, three months, one day) to the town. Organ Morgan, the town organist, thinks about music and ignores his wife. Willy Nilly, the postman, heads out to deliver the townspeople’s mail, which he and Mrs. Willy Nilly steam open and read in advance. As he makes his rounds, he shares the gossip he’s gleaned from his snooping.

Captain Cat sits beside an open window, listening to the sounds of the day unfolding and making observations about people as they walk by. Women flock to Mrs. Organ Morgan’s general store to gossip. They complain about Polly Garter, who has affairs (and babies) with many of the town’s married men. Mrs. Dai Bread Two, a sultry, exotic woman, tells the plain Mrs. Dai Bread One about a vision she sees in her crystal ball, which features their husband in bed with two women. Polly scrubs the steps of the Welfare Hall in preparation for the dance that will take place there that evening. She sings a mournful song about Little Willy Weazel, the only man she ever loved, who died many years ago. Reverend Eli Jenkins hears her singing and praises God for music.

In the afternoon, schoolchildren run screaming and singing from the schoolhouse, and Captain Cat sings along with them. A little girl named Gwennie demands that boys kiss her or give her a penny. Men ogle Gossamer Beynon, the young schoolteacher, as she walks down the street in her high heels. Gossamer and Sinbad Sailors, the barkeeper, pine for each other, but they keep their feelings to themselves. Fishermen make their way to Sinbad’s bar, Sailors Arms. Captain Cat takes a nap, dreams of Rosie Probert, and cries in his sleep. Reverend Eli Jenkins sits in his poem-room and works on the White Book of Llareggub, a book he’s writing to honor the town he loves so deeply

As day turns into evening, women retreat to their rooms to prepare for the night’s dance, while the drinkers in Sailors Arms grumble about the sinfulness of dancing. Mrs. Ogmore-Pritchard retreats to her bedroom, and the ghosts of her dead husbands reluctantly return to her. Mr. Mog Edwards and Miss Myfanwy Price sit in their respective bedrooms on the opposite ends of town and write love letters to each other. Polly Garter and Mr. Waldo head to Milk Wood to conduct their affair. Jack Black prepares for an evening of disrupting lovers’ trysts in the wood. First and Second Voice describe what Milk Wood means to different townspeople. To Jack Black, it is place of sin; to lovers, it is a sanctuary; to Mary Ann Sailors, it is the Garden of Eden; and to Reverend Eli Jenkins, it symbolizes “the innocence of men.” 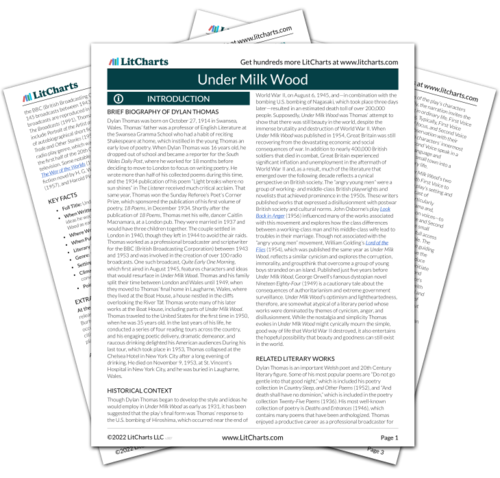 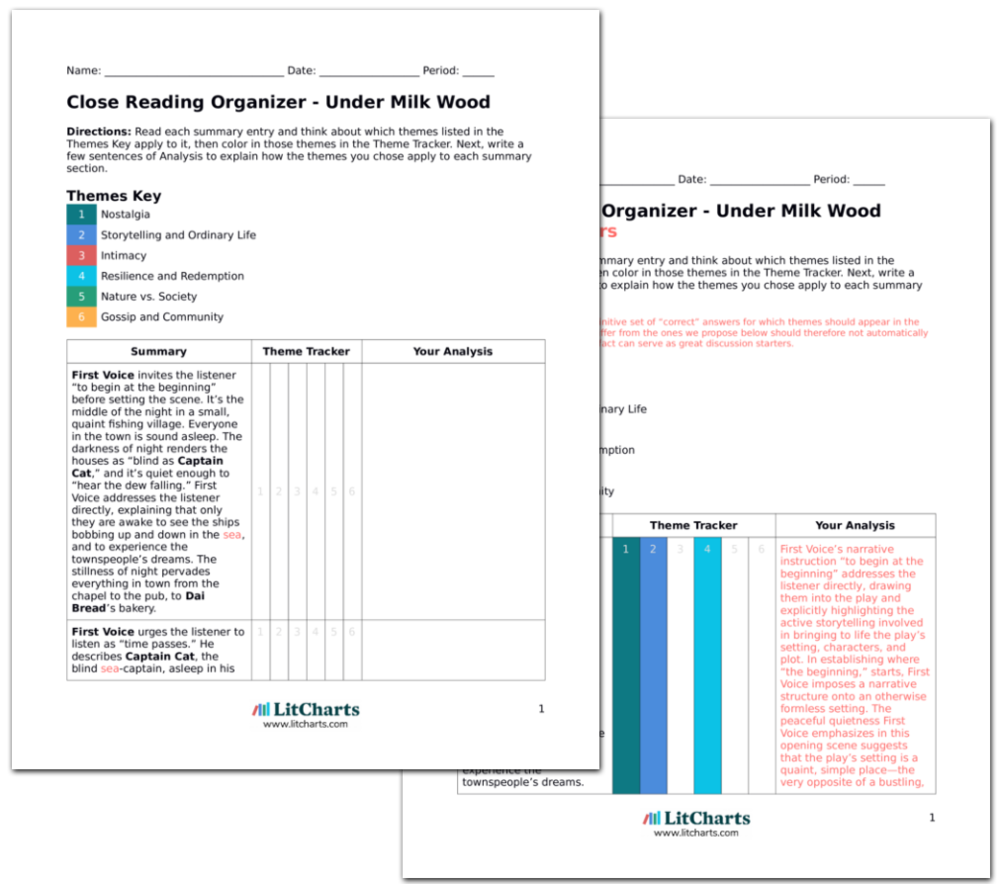