Welcome to the LitCharts study guide on Jean Rhys's Wide Sargasso Sea. Created by the original team behind SparkNotes, LitCharts are the world's best literature guides.

A concise biography of Jean Rhys plus historical and literary context for Wide Sargasso Sea.

A quick-reference summary: Wide Sargasso Sea on a single page.

In-depth summary and analysis of every section of Wide Sargasso Sea. Visual theme-tracking, too.

Explanations of Wide Sargasso Sea's symbols, and tracking of where they appear.

Ella Gwendolyn Rees Williams was born in 1890 to a Welsh doctor and a Creole woman of Scots ancestry on the Caribbean island of Dominica, then a British colony. At sixteen she was sent to England, where she studied to be an actress. Williams struggled in her studies with being ostracized for her Caribbean heritage and accent, and eventually was taken out of school because her instructors deemed her unable to rid herself of the West Indies accent that would prevent her from gaining significant stage roles. She then subsisted in Britain for nearly a decade on small acting roles and chorus girl parts, with brief stints in nude modeling and prostitution. After suffering a near-fatal abortion paid for by a former lover, Williams began to write. In 1924, in the midst of a tumultuous marriage, Ella Williams made the acquaintance of the acclaimed English novelist Ford Madox Ford. Ford took her in as both a protégé and mistress, suggesting that she change her name to Jean Rhys, and eventually facilitating the publication of her work, which often dealt with her own experiences of alienation as a woman at the hands of unjust lovers and an exclusionary society. The three major novels that Rhys produced during the 1930’s—After Leaving Mr. Mackenzie, Voyage in the Dark, and Good Morning, Midnight—were met with mixed critical success. It wasn’t until 1966, after several decades of anonymity marked by two more failed marriages and an ever deepening problem with alcoholism, that Rhys published Wide Sargasso Sea and was rocketed to literary fame. Wide Sargasso Sea remains her most acclaimed work, having garnered her several major literary awards and a place in the canon of postcolonial literature in English. Rhys died in 1979, in Exeter, UK.
Get the entire Wide Sargasso Sea LitChart as a printable PDF.
"My students can't get enough of your charts and their results have gone through the roof." -Graham S.
Download 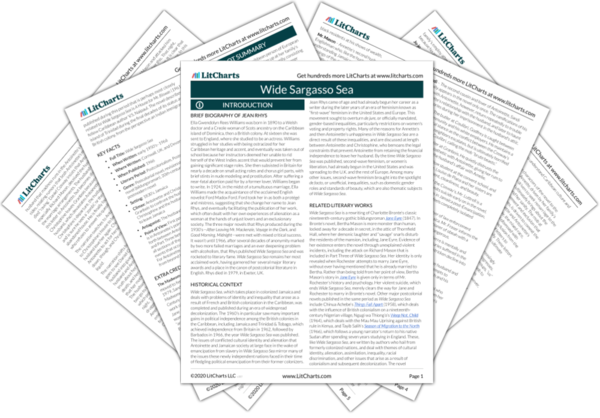 Wide Sargasso Sea, which takes place in colonized Jamaica and deals with problems of identity and inequality that arose as a result of French and British colonization in the Caribbean, was completed and published during an era of widespread decolonization. The 1960‘s in particular saw many important gains in political independence among the British colonies in the Caribbean, including Jamaica and Trinidad & Tobago, which achieved independence from Britain in 1962, followed by Barbados in 1966, the year Wide Sargasso Sea was published. The issues of conflicted cultural identity and alienation that Antoinette and Jamaican society at large face in the wake of emancipation from slavery in Wide Sargasso Sea mirror many of the issues these newly independent nations faced in their time of fledgling political emancipation from their former colonizers. Jean Rhys came of age and had already begun her career as a writer during the later years of an era of feminism known as “first-wave” feminism in the United States and Europe. This movement sought to overturn de jure, or officially mandated, gender-based inequalities, particularly restrictions on women's voting and property rights. Many of the reasons for Annette’s and then Antoinette’s unhappiness in Wide Sargasso Sea are a direct result of these inequalities, and are discussed at length between Antoinette and Christophine, who bemoans the legal constraints that prevent Antoinette from retaining the financial independence to leave her husband. By the time Wide Sargasso Sea was published, second-wave feminism, or women’s liberation, had already begun in the United States and was spreading to the U.K. and the rest of Europe. Among many other issues, second-wave feminism brought into the spotlight de facto, or unofficial, inequalities, such as domestic gender roles and standards of beauty, which are also thematic subjects of Wide Sargasso Sea.

Wide Sargasso Sea is a rewriting of Charlotte Bronte’s classic nineteenth-century gothic bildungsroman Jane Eyre (1847). In Bronte’s novel, Bertha Mason is more monster than human, locked away for a decade in secret, in the attic of Thornfield Hall, where her demonic laughter and “savage” snarls disturb the residents of the mansion, including Jane Eyre. Evidence of her existence enters the novel through unexplained violent incidents, including the attack on Richard Mason that is included in Part Three of Wide Sargasso Sea. Her identity is only revealed when Rochester attempts to marry Jane Eyre, without ever having mentioned that he is already married to Bertha. Rather than being told from her point of view, Bertha Mason’s story in Jane Eyre is given only in terms of Mr. Rochester’s history and psychology. Her violent suicide, which ends Wide Sargasso Sea, merely clears the way for Jane and Rochester to marry in Bronte’s novel. Other major postcolonial novels published in the same period as Wide Sargasso Sea include Chinua Achebe’s Things Fall Apart (1958), which deals with the influence of British colonialism on a nineteenth-century Nigerian village, Ngugi wa Thiong’o’s Weep Not, Child (1964), which deals with the Mau Mau Uprising against British rule in Kenya, and Tayib Salih’s Season of Migration to the North (1966), which follows a young narrator’s return to his native Sudan after spending seven years studying in England. These, like Wide Sargasso Sea, are written by authors who hail from formerly colonized nations, and deal with themes of cultural identity, alienation, assimilation, inequality, racial discrimination, and other issues that arise as a result of colonialism and subsequent decolonization. The novel published during this period that is perhaps most closely related to Wide Sargasso Sea is A House for Mr. Biswas (1961), by fellow Caribbean author V.S. Naipaul. The novel describes the island of Trinidad during the final decades of its status as a British colony, from the perspective an Indian immigrant.
Key Facts about Wide Sargasso Sea

The Madwoman In the Attic. Jean Rhys was not the only author moved to feminist critique by the character of Bertha Mason. In 1979, Sandra Gilbert and Susan Gubar published The Madwoman In the Attic: The Woman Writer and the Nineteenth-Century Literary Imagination. In it, Gilbert and Gubar use the work of female authors like the Bronte sisters, Emily Dickinson, Jane Austen, and George Eliot to show that nineteenth century women were confined to portraying female characters as either “angels” (like Charlotte Bronte’s Jane Eyre) or “monsters” (like Bertha Mason). They urge female writers to break down this dichotomy. Though published a decade before this seminal work of feminist criticism, Wide Sargasso Sea seems to enact precisely what Gilbert and Gubar call for in their book. Rhys takes the “monster” figure of Bertha and revises it with Antoinette, who is neither angel nor monster, but contains elements of both in a fully imagined, if deeply troubled, female character.