Download this LitChart! (PDF)
Teachers and parents! Struggling with distance learning? Our Teacher Edition on Jane Eyre can help.

Welcome to the LitCharts study guide on Charlotte Brontë's Jane Eyre. Created by the original team behind SparkNotes, LitCharts are the world's best literature guides.

A concise biography of Charlotte Brontë plus historical and literary context for Jane Eyre.

A quick-reference summary: Jane Eyre on a single page.

In-depth summary and analysis of every chapter of Jane Eyre. Visual theme-tracking, too.

Explanations of Jane Eyre's symbols, and tracking of where they appear.

An interactive data visualization of Jane Eyre's plot and themes.

Charlotte Brontë's father was a rural clergyman. She lost her mother when she was five years old. Brontë's two older sisters—Maria and Elizabeth—died from an illness that they likely contracted at their harsh boarding school. Though outwardly plain, Brontë had an active imaginative life, writing stories of an elaborate fantasy world called Angria. Brontë's first of four novels—Jane Eyre—was immediately and widely popular, and brought her into London literary circles. Her sisters Emily and Anne were also successful novelists. After losing all of her siblings to illness, Brontë married a clergyman she respected, but did not love. She died at 38 of complications during her first pregnancy.
Get the entire Jane Eyre LitChart as a printable PDF.
"My students can't get enough of your charts and their results have gone through the roof." -Graham S.
Download 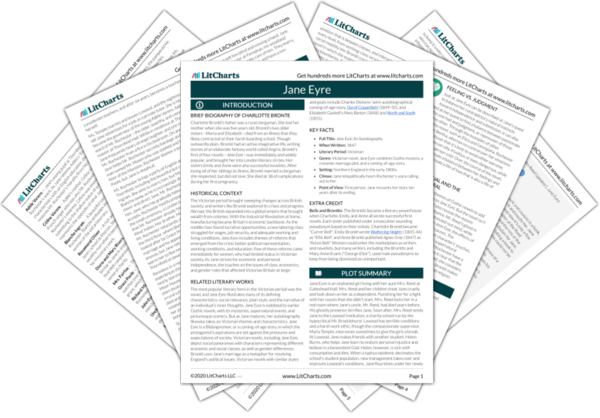 The Victorian period brought sweeping changes across British society, and writers like Brontë explored its crises and progress. Abroad, the British expanded into a global empire that brought wealth from colonies. With the Industrial Revolution at home, manufacturing became Britain's economic backbone. As the middle class found lucrative opportunities, a new laboring class struggled for wages, job security, and adequate working and living conditions. Jane Eyre includes themes of reforms that emerged from the crisis: better political representation, working conditions, and education. Few of these reforms came immediately for women, who had limited status in Victorian society. As Jane strives for economic and personal independence, she touches on the issues of class, economics, and gender roles that affected Victorian Britain at large.

Other Books Related to Jane Eyre

The most popular literary form in the Victorian period was the novel, and Jane Eyre illustrates many of its defining characteristics: social relevance, plain style, and the narrative of an individual's inner thoughts. Jane Eyre is indebted to earlier Gothic novels, with its mysteries, supernatural events, and picturesque scenery. But as Jane matures, her autobiography likewise takes on Victorian themes and characteristics. Jane Eyre is a Bildungsroman, or a coming-of-age story, in which the protagonist's aspirations are set against the pressures and expectations of society. Victorian novels, including Jane Eyre, depict social panoramas with characters representing different economic and social classes, as well as gender differences. Brontë uses Jane's marriage as a metaphor for resolving England's political issues. Victorian novels with similar styles and goals include Charles Dickens' semi-autobiographical coming-of-age story, David Copperfield (1849-50), and Elizabeth Gaskell's Mary Barton (1848) and North and South (1855).
Key Facts about Jane Eyre

Bells and Brontës: The Brontës became a literary powerhouse when Charlotte, Emily, and Anne all wrote successful first novels. Each sister published under a masculine-sounding pseudonym based on their initials. Charlotte Brontë became "Currer Bell"; Emily Brontë wrote Wuthering Heights (1845-46) as "Ellis Bell", and Anne Brontë published Agnes Gray (1847) as "Acton Bell." Women could enter the marketplace as writers and novelists, but many writers, including the Brontës and Mary Anne Evans ("George Eliot"), used male pseudonyms to keep from being dismissed as unimportant.