When author and narrator Bill Bryson decides to hike the Appalachian Trail in 1996, his fear of hiking alone in the remote wilderness leads him to seek out a travel companion. He ends up taking the trip with Stephen Katz, an acquaintance whom he hasn’t seen in years. Bryson’s wife thinks this is a terrible idea—she remembers Bryson finding Katz incredibly annoying, so she wonders if Bryson will be able to tolerate Katz’s company during the months-long hike. When Katz arrives, his unhealthy lifestyle and lack of preparation make Bryson worry that Katz’s company will be a burden. At first, it seems like Bryson is right, as Katz’s every move seems to frustrate Bryson. Yet as Bryson and Katz continue on their journey—which is not only isolating but much more physically grueling than expected—the little kindnesses they offer each other (as well as the kind gestures that other hikers extend to them) start to soften Bryson’s initial misgivings. The way they look out for each other creates strong sense of companionship that helps each cope with the challenging experience of hiking in such remote territory.

Although Bryson is grateful that he won’t have to hike alone, his initial incompatibility with Katz makes Bryson question whether including him was the right move. From the moment Bryson sets eyes on Katz, he regrets his decision to invite him along: Katz is severely overweight, addicted to junk food, and somewhat dimwitted when it comes to survival skills. Bryson loses patience with Katz’s labored hiking pace in the first couple hours of the hike and decides to hike on ahead, reflecting that “I stood and waited a long while […] but eventually turned and struggled on. I had enough agonies of my own.” Similarly, when Katz doesn’t know how to pitch his own tent, Bryson seethes internally, thinking to himself that Katz is a “big, soft, flabby baby” who’s going to make the trip more difficult. From the start, Bryson views Katz as a liability rather than someone with the potential to become a much-needed friend for him on the Trail. Similarly, on several occasions, Katz (who’s struggling with his load), thoughtlessly sheds essential food stocks that Bryson and Katz need to get through the next few days, which Bryson finds utterly idiotic. Bryson’s frustration implies that he often thinks of Katz as a burden rather than a balm against isolation, especially in the early phases of their journey.

Bryson soon learns that many hikers on the Appalachian Trail thrive on the camaraderie and kindness they share with each other, especially in tough moments, which softens his attitude toward Katz. Bryson starts to feel a sense of camaraderie with hikers along the Trail, because they all share the same burdens: “the same weather, the same discomforts, same landscapes, the same eccentric impulse to hike to Maine.” In struggling through the “ever-taxing terrain,” Bryson is deeply moved by kind gestures from others along the Trail. For example, volunteers often leave canned food (and even, on occasion, cooked meals like fried chicken) in hiking shelters along the route, which revive Bryson and Katz tremendously as they slog through the mountainous terrain. Similarly, an innkeeper named Peggy provides a warm, welcoming environment for hikers who pass through, and her positive attitude motivates Bryson “to keep going.” Even Katz, who never gets used to the difficult journey, looks “chipper” after a restful stop there. Though simple, these small interactions and gestures of kindness make a big impact on Bryson and Katz, who are otherwise isolated on their journey.

As Bryson and Katz come to depend on the kindness of strangers, they also start to appreciate the little ways in which they look out for each other as they grapple with the remote, challenging terrain. Bryson gets used to stopping and waiting for Katz, and he discovers that these moments of solitude help him appreciate his surroundings and feel more comfortable in the forest. These restful moments help him acquire a sense of peaceful solitude—or “perfect aloneness.” He’s able to enjoy spending time alone while also knowing that Katz will be around to help him endure the “unnerving isolation” of camping at night. Bryson and Katz learn to accept each other’s quirks in ways they don’t initially anticipate, which helps them work as a team as they tackle their difficult journey. For instance, although Bryson finds Katz a little rude, he learns to appreciate Katz’s ability to ward off people Bryson doesn’t like. When a hiker named Bob corners Bryson and monologues at length about his see-through pouch until Katz interjects with a cutting comment to get rid of Bob, which delights Bryson. In this way, Bryson learns to see Katz’s quirks—many of which he initially found irritating—in a new light. Additionally, despite grappling with an impossibly long journey ahead, Bryson and Katz don’t hesitate to help carry each other’s heavy packs or turn around and backtrack on the miles they’ve covered to help each other. Bryson admits that small gestures like these make him happy, because “we seemed to be looking out for each other. It was very nice. I can put it no other way.” Despite his misgivings about Katz’s company, he deeply appreciates the kindness that they show each other.  In the end, the small gestures and the sense of camaraderie that hikers along the Trail share with one another inspire Bryson and Katz to forge their own companionship. This helps them manage their isolation and push on with their grueling journey, despite their clashing personalities. 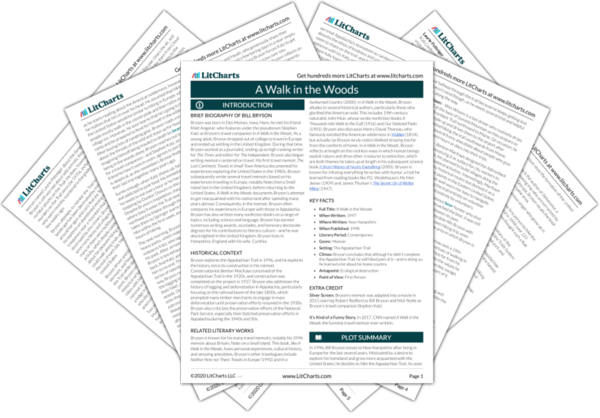 Isolation, Companionship, and Kindness Quotes in A Walk in the Woods

Below you will find the important quotes in A Walk in the Woods related to the theme of Isolation, Companionship, and Kindness.
Chapter 2 Quotes

I still have my appendix, and any number of other organs that might burst or sputter in the empty wilds. What would I do then? What if I fell from a ledge and broke my back? What if I lost the trail in blizzard or fog, or was nipped by a venomous snake, or lost my footing on moss-slickened rocks crossing a stream and cracked my head a concussive blow? You could drown in three inches of water on your own. You could die from a twisted ankle. No, I didn't like the feel of this at all.

“I, oh…I threw out the filter papers.”

I gave a sound that wasn't quite a laugh. “They couldn't have weighed two ounces.”

“I know, but they were great for throwing. Fluttered all over.” He dribbled on more water. “The toilet paper seems to be working OK, though.”

You become part of an informal clump, a loose and sympathetic affiliation of people from different age groups and walks of life but all experiencing the same weather, same discomforts, same landscapes, same eccentric impulse to hike to Maine.

We seemed to be looking out for each other. It was very nice. I can put it no other way.

“You're too fat. You should have lost weight before you came out here. Shoulda done some training, ‘cause you could have like a serious, you know, heart thing out here.” 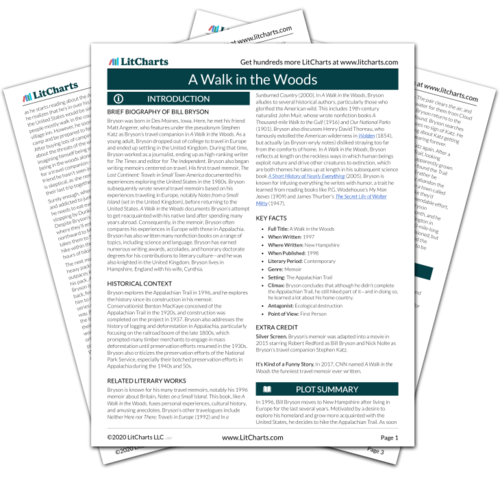 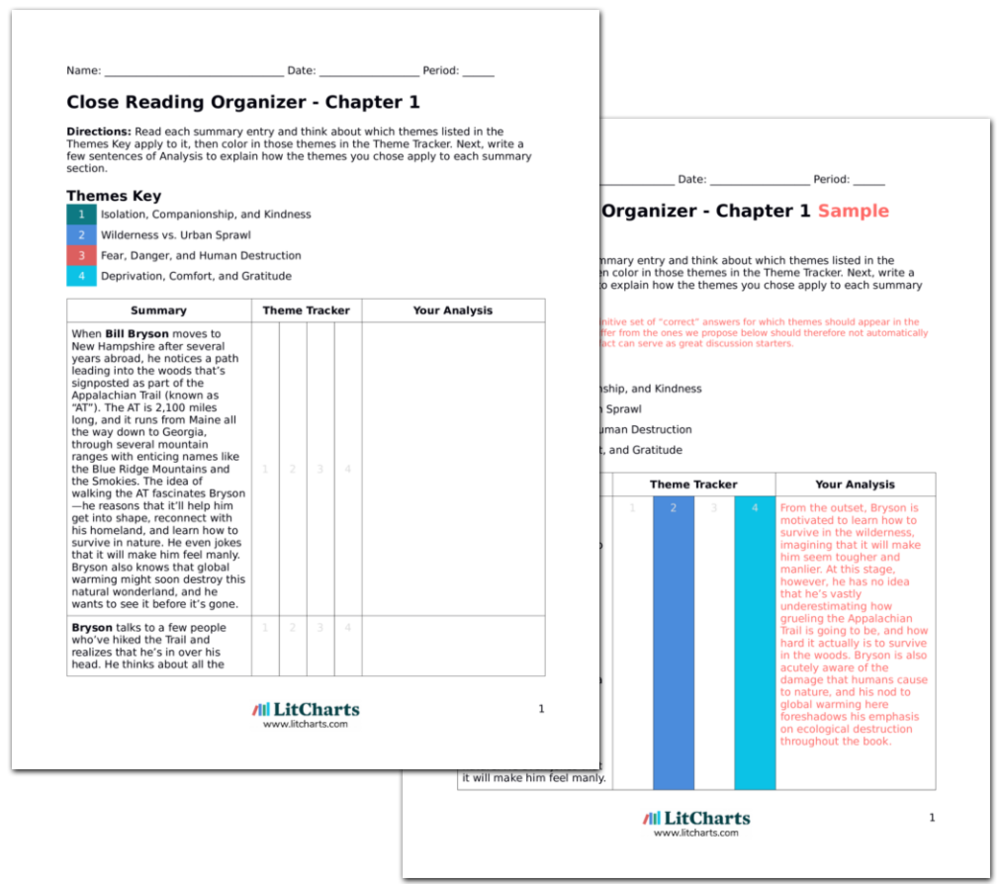