Download this LitChart! (PDF)
Teachers and parents! Struggling with distance learning? Our Teacher Edition on Before We Were Free can help.

Welcome to the LitCharts study guide on Julia Alvarez's Before We Were Free. Created by the original team behind SparkNotes, LitCharts are the world's best literature guides.

Before We Were Free: Introduction

A concise biography of Julia Alvarez plus historical and literary context for Before We Were Free.

Before We Were Free: Plot Summary

A quick-reference summary: Before We Were Free on a single page.

Before We Were Free: Detailed Summary & Analysis

In-depth summary and analysis of every chapter of Before We Were Free. Visual theme-tracking, too.

Before We Were Free: Themes

Explanations, analysis, and visualizations of Before We Were Free's themes.

Before We Were Free: Quotes

Before We Were Free's important quotes, sortable by theme, character, or chapter.

Before We Were Free: Characters

Description, analysis, and timelines for Before We Were Free's characters.

Before We Were Free: Symbols

Explanations of Before We Were Free's symbols, and tracking of where they appear.

Before We Were Free: Theme Wheel

An interactive data visualization of Before We Were Free's plot and themes.

Alvarez was born in New York City, but she and her parents returned to the Dominican Republic when Alvarez was only three months old. There, she grew up surrounded by extended family members until 1960, when her family had to leave the Dominican Republic suddenly. This is because her father was involved in a failed plot to assassinate Rafael Trujillo, the dictator of the Dominican Republic. Moving to New York as a 10-year-old was traumatic and difficult for Alvarez: she faced discrimination and turned to reading and writing to cope. After graduating from a private boarding school, Alvarez earned a bachelor’s degree from Middlebury University and a master’s degree from Syracuse University. She published her first volume of poetry, The Homecoming, in 1984 and her first novel, How the García Girls Lost Their Accents, in 1991. Since then, Alvarez has published a number of adult and middle-grade novels, many of which have won multiple awards. She also authored a series of children’s picture books. She lives in Vermont with her husband and is a writer-in-residence at Middlebury College.
Get the entire Before We Were Free LitChart as a printable PDF.
"My students can't get enough of your charts and their results have gone through the roof." -Graham S.
Download 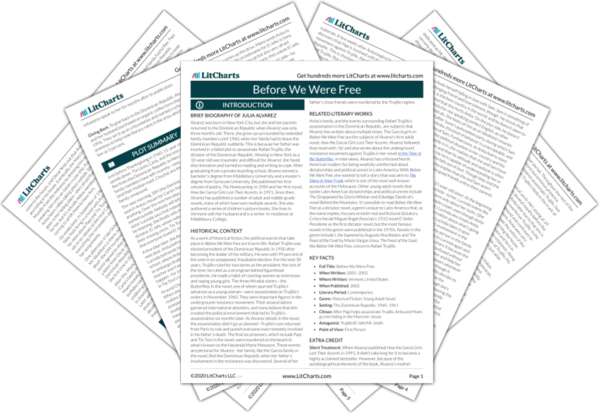 Historical Context of Before We Were Free

As a work of historical fiction, the political events that take place in Before We Were Free are true to life. Rafael Trujillo was elected president of the Dominican Republic in 1930 after becoming the leader of the military. He won with 99 percent of the vote in an unopposed, fraudulent election. For the next 30 years, Trujillo ruled for two terms as the president; the rest of the time, he ruled as a strongman behind figurehead presidents. He made a habit of courting women as mistresses and raping young girls. The three Mirabal sisters—the Butterflies in the novel, one of whom spurned Trujillo’s advances as a young woman—were assassinated on Trujillo’s orders in November 1960. They were important figures in the underground resistance movement. Their assassinations garnered international attention, and many believe that this created the political environment that led to Trujillo’s assassination six months later. As Alvarez details in the novel, the assassination didn’t go as planned—Trujillo’s son returned from Paris to rule and punish everyone even remotely involved in his father’s death. The final six prisoners, which include Papi and Tío Toni in the novel, were murdered on the beach in what’s known as the Hacienda María Massacre. These events are personal for Alvarez—her family, like the García family in the novel, fled the Dominican Republic when her father’s involvement in the resistance was discovered. Several of her father’s close friends were murdered by the Trujillo regime.

Other Books Related to Before We Were Free

Anita’s family, and the events surrounding Rafael Trujillo’s assassination in the Dominican Republic, are subjects that Alvarez has written about multiple times. The García girls in Before We Were Free are the subjects of Alvarez’s first adult novel, How the García Girls Lost Their Accents. Alvarez followed that novel with ¡Yo! and also wrote about the underground resistance movement against Trujillo in her novel In the Time of the Butterflies. In interviews, Alvarez has criticized North American readers for being woefully uninformed about dictatorships and political unrest in Latin America. With Before We Were Free, she wanted to tell a story that was akin to The Diary of Anne Frank, which is one of the most well-known accounts of the Holocaust. Other young adult novels that tackle Latin American dictatorships and political unrest include The Disappeared by Gloria Whelan and Edwidge Danticat’s novel Behind the Mountains. It’s possible to read Before We Were Free as a dictator novel, a genre unique to Latin America that, as the name implies, focuses on both real and fictional dictators. Critics herald Miguel Ángel Asturias’s 1933 novel El Señor Presidente as the first dictator novel, but the most famous novels in the genre were published in the 1970s. Novels in the genre include I, the Supreme by Augusto Roa Bastos and The Feast of the Goat by Mario Vargas Llosa. The Feast of the Goat, like Before We Were Free, concerns Rafael Trujillo.
Key Facts about Before We Were Free

Extra Credit for Before We Were Free

Silent Treatment. When Alvarez published How the García Girls Lost Their Accents in 1991, it didn’t take long for it to become a highly acclaimed bestseller. However, because of the autobiographical elements of the book, Alvarez’s mother refused to speak to her for months after its publication.

Giving Back. To give back to the Dominican Republic, Alvarez and her husband purchased an organic coffee farm there in 1996. They set it up as a foundation and started a school on the premises to help raise literacy rates in the area, which were as low as 5 percent. 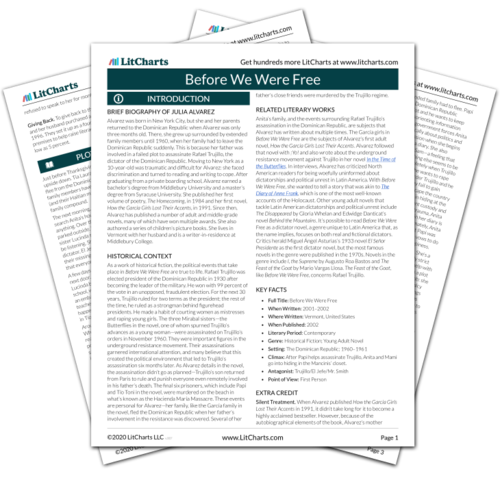 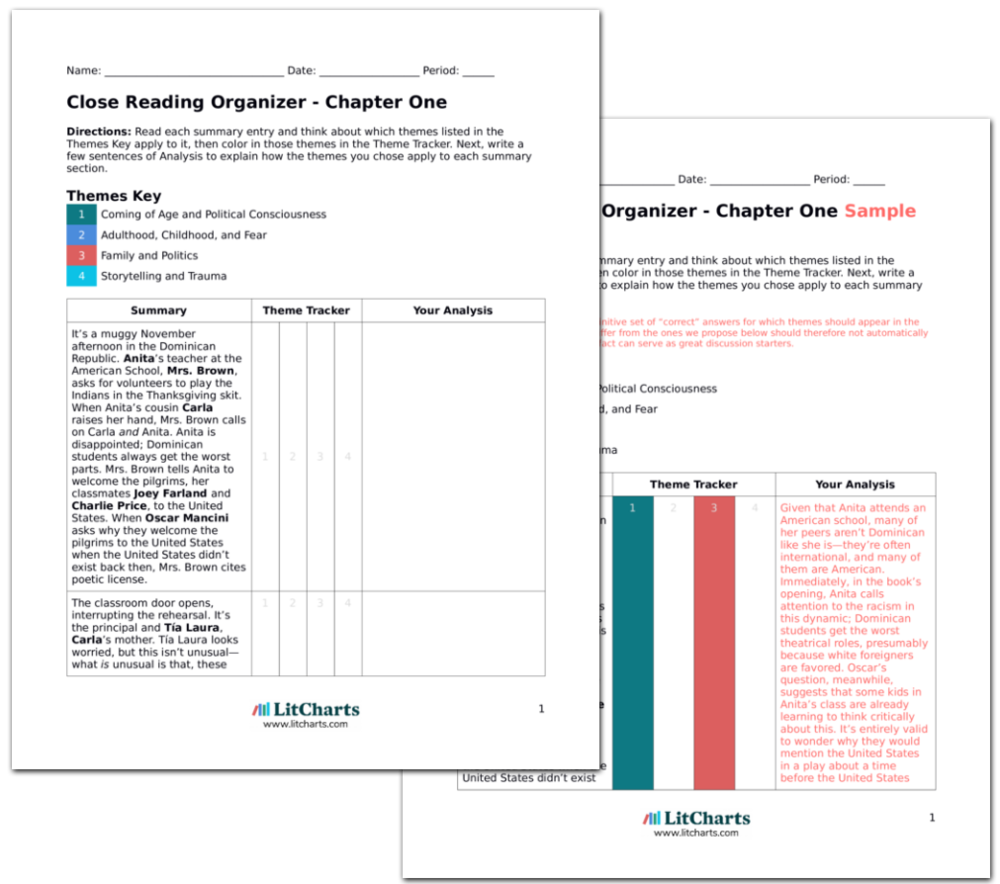