Download this LitChart! (PDF)
Teachers and parents! Struggling with distance learning? Our Teacher Edition on Big Fish can help.

Welcome to the LitCharts study guide on Daniel Wallace's Big Fish. Created by the original team behind SparkNotes, LitCharts are the world's best literature guides.

A concise biography of Daniel Wallace plus historical and literary context for Big Fish.

A quick-reference summary: Big Fish on a single page.

In-depth summary and analysis of every chapter of Big Fish. Visual theme-tracking, too.

Explanations of Big Fish's symbols, and tracking of where they appear.

An interactive data visualization of Big Fish's plot and themes.

Daniel Wallace grew up in Birmingham, Alabama, with his three sisters. He studied English and philosophy at Emory University in Boston, but he eventually abandoned his studies to pursue a career in his father’s trading company in Nagoya, Japan. Finding himself ill-suited to the work, he quit to pursue writing, though he sometimes jokes that his father fired him. Wallace moved to North Carolina with his wife, where he worked in a bookstore while writing novels. Wallace was initially drawn to writing because he enjoys the “pure pleasure of invention,” and he says he learned how to write by simply trying to write, since he didn’t have a formal education at the time. He wrote five novels that were rejected by publishers before his sixth novel, Big Fish, was accepted for publication in 1998. It received widespread critical acclaim and has been since translated into 18 languages. Wallace resumed his education at the University of North Carolina, Chapel Hill, while continuing to write, and graduated in 2008. He currently live in North Carolina with his wife and son, and he teaches English at the University of North Carolina, Chapel Hill, while publishing novels. His eighth novel, The Kings and Queens of Roam, was published in 2013.
Get the entire Big Fish LitChart as a printable PDF.
"My students can't get enough of your charts and their results have gone through the roof." -Graham S.
Download 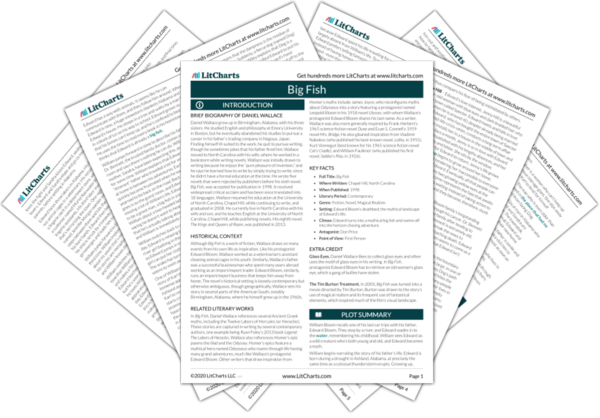 Although Big Fish is a work of fiction, Wallace draws on many events from his own life as inspiration. Like his protagonist Edward Bloom, Wallace worked as a veterinarian’s assistant cleaning animal cages in his youth. Similarly, Wallace’s father was a successful businessman who spent many years abroad working as an import/export trader. Edward Bloom, similarly, runs an import/export business that keeps him away from home. The novel’s historical setting is loosely contemporary but otherwise ambiguous, though geographically, Wallace sets his story in several parts of the American South, notably Birmingham, Alabama, where he himself grew up in the 1960s.

Other Books Related to Big Fish

In Big Fish, Daniel Wallace references several Ancient Greek myths, including the Twelve Labors of Hercules (or Heracles). These stories are captured in writing by several contemporary authors, one example being Ryan Foley’s 2013 book Legend: The Labors of Heracles. Wallace also references Homer’s epic poems the Iliad and the Odyssey. Homer’s epics feature a mythical hero named Odysseus who roams through life having many grand adventures, much like Wallace’s protagonist Edward Bloom. Other writers that draw inspiration from Homer’s myths include James Joyce, who reconfigures myths about Odysseus into a story featuring a protagonist named Leopold Bloom in his 1918 novel Ulysses, with whom Wallace’s protagonist Edward Bloom shares his last name. As a writer, Wallace was also more generally inspired by Frank Herbert’s 1965 science-fiction novel Dune and Evan S. Connell’s 1959 novel Mrs. Bridge. He also gleaned inspiration from Vladimir Nabokov (who published his best-known novel, Lolita, in 1955), Kurt Vonnegut (best known for his 1965 science fiction novel Cat’s Cradle), and William Faulkner (who published his first novel, Soldier’s Play, in 1926).
Key Facts about Big Fish

Glass Eyes. Daniel Wallace likes to collect glass eyes and often uses the motif of glass eyes in his writing. In Big Fish, protagonist Edward Bloom has to retrieve an old woman’s glass eye, which a gang of bullies have stolen.

The Tim Burton Treatment. In 2003, Big Fish was turned into a movie directed by Tim Burton. Burton was drawn to the story’s use of magical realism and its frequent use of fantastical elements, which inspired much of the film’s visual landscape. 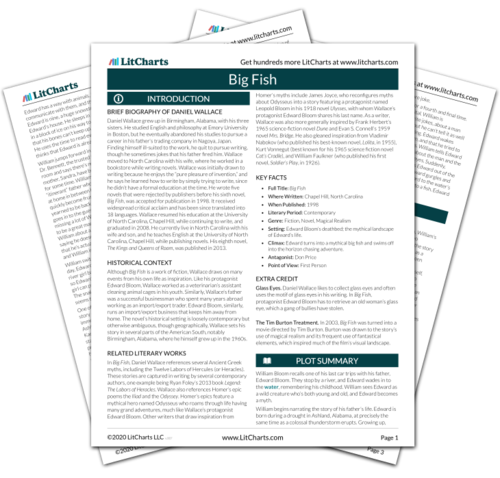 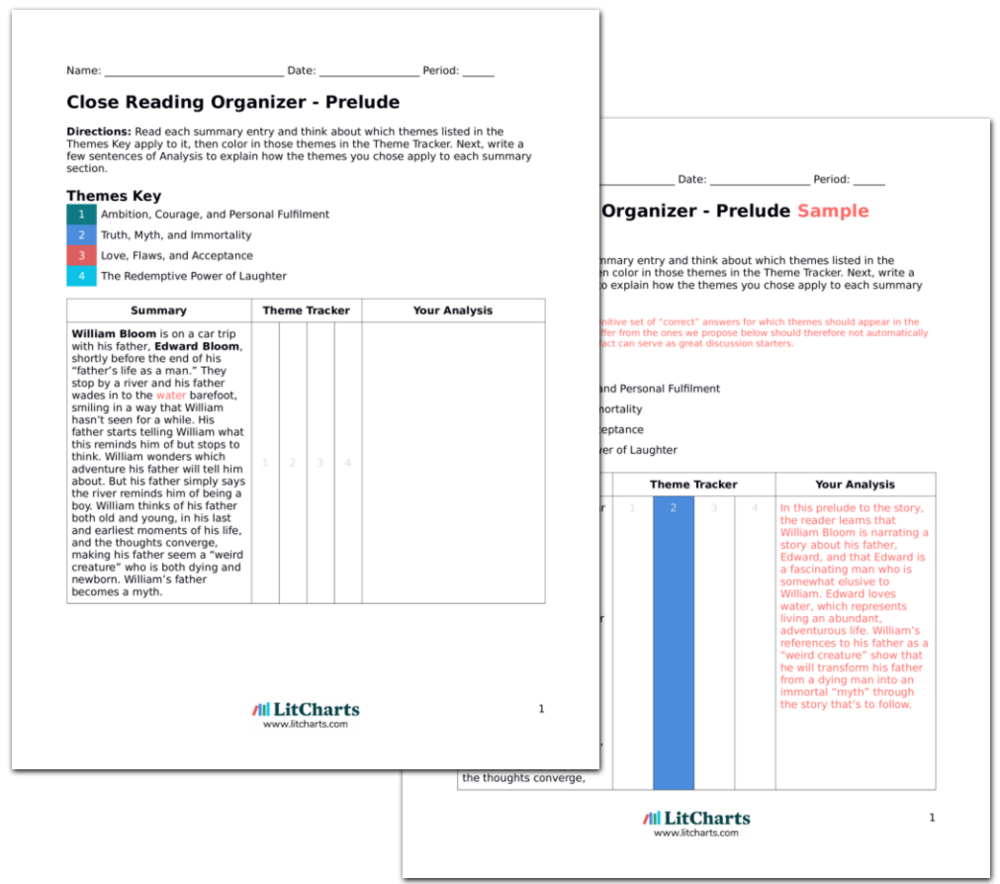