Download this LitChart! (PDF)
Teachers and parents! Struggling with distance learning? Our Teacher Edition on Black No More can help.

Welcome to the LitCharts study guide on George S. Schuyler's Black No More. Created by the original team behind SparkNotes, LitCharts are the world's best literature guides.

A concise biography of George S. Schuyler plus historical and literary context for Black No More.

A quick-reference summary: Black No More on a single page.

In-depth summary and analysis of every chapter of Black No More. Visual theme-tracking, too.

Explanations, analysis, and visualizations of Black No More's themes.

Description, analysis, and timelines for Black No More's characters.

Explanations of Black No More's symbols, and tracking of where they appear.

An interactive data visualization of Black No More's plot and themes.

Schuyler was born in Providence, Rhode Island, to George Schuyler, a chef, and Eliza Jane Schuyler. Schuyler’s father died when he was young, and he spent his early years in Syracuse, New York, where his mother moved their family after she remarried. In 1912, Schuyler enlisted in the U.S. Army and was promoted to the rank of First Lieutenant. He went AWOL after a Greek immigrant, who had been instructed to shine Schuyler’s shoes, refused to do so because Schuyler was Black. After turning himself in, Schuyler was convicted by a military court and sentenced to five years in prison; he was then released after nine months as a model prisoner. Schuyler then moved to New York City and worked as a handyman while reading books that sparked his interest in socialism. He lived for a period in the Phyllis Wheatley Hotel, which was run by Marcus Garvey’s Universal Negro Improvement Association (UNIA). His involvement in the group led him to begin a weekly column for the Pittsburgh Courier in 1924 and subsequently wrote for many prominent national newspapers. By this time, he dissented from Garvey’s philosophy and began to believe that socialists cared very little for Black Americans. Schuyler objected to segregation and married Josephine Lewis Cogdell, a liberal white Texan heiress, in 1928, and they had a daughter, Philippa, in 1931. Also in 1931, Schuyler published Black No More, and from 1937 to 1944, he became the business manager of the NAACP and subsequently moved sharply to the political right. He expressed opposition to Martin Luther King Jr.’s being awarded the Nobel Peace Prize, particularly because Schuyler was anti-Christian. Schuyler also opposed the Civil Rights Act of 1964, acknowledging that discrimination was morally wrong and unjust, but opposing federal action to coerce changes in public attitudes. Over the between the 1930s and 1950s, Schuyler continued to publish novellas and short stories, often publishing them pseudonymously. In 1964, he ran for the House of Representatives in New York on the Conservative Party ticket and endorsed Republican Barry Goldwater for President. In 1967, Philippa (who had become a journalist) was killed on an assignment in Vietnam, and Josephine committed suicide two years later. Schuyler died in 1977 in New York City.
Get the entire Black No More LitChart as a printable PDF.
"My students can't get enough of your charts and their results have gone through the roof." -Graham S.
Download 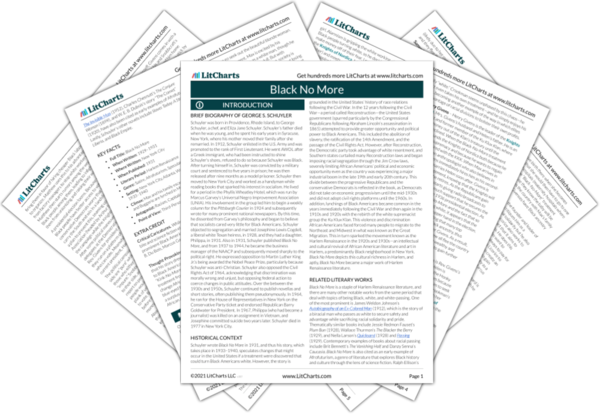 Historical Context of Black No More

Schuyler wrote Black No More in 1931, and thus his story, which takes place in 1933–1940, speculates changes that might occur in the United States if a treatment were discovered that could turn Black Americans white. However, the story is grounded in the United States’ history of race relations following the Civil War. In the 12 years following the Civil War—a period called Reconstruction—the United States government (spurred particularly by the Congressional Republicans following Abraham Lincoln’s assassination in 1865) attempted to provide greater opportunity and political power to Black Americans. This included the abolition of slavery, the ratification of the 14th Amendment, and the passage of the Civil Rights Act. However, after Reconstruction, the Democratic party took advantage of white resentment, and Southern states curtailed many Reconstruction laws and began imposing racial segregation through the Jim Crow laws, severely limiting African Americans’ political and economic opportunity even as the country was experiencing a major industrial boom in the late 19th and early 20th century. This divide between the progressive Republicans and the conservative Democrats is reflected in the book, as Democrats did not take on economic progressivism until the mid-1930s and did not adopt civil rights platforms until the 1960s. In addition, lynchings of Black Americans became common in the years immediately following the Civil War and then again in the 1910s and 1920s with the rebirth of the white supremacist group the Ku Klux Klan. This violence and discrimination African Americans faced forced many people to migrate to the Northeast and Midwest in what was known as the Great Migration. This in turn sparked the movement known as the Harlem Renaissance in the 1920s and 1930s—an intellectual and cultural revival of African American literature and art in Harlem, a predominantly Black neighborhood in New York. Black No More depicts this cultural richness in Harlem, and aptly, Black No More became a major work of Harlem Renaissance literature.

Other Books Related to Black No More

Black No More is a staple of Harlem Renaissance literature, and there are many other notable works from the same period that deal with topics of being Black, white, and white-passing. One of the most prominent is James Weldon Johnson’s Autobiography of an Ex-Colored Man (1912), which is the story of a biracial man who passes as white to secure safety and advantage while sacrificing racial solidarity and pride. Thematically similar books include Jessie Redmon Fauset’s Plum Bun (1928), Wallace Thurmon’s The Blacker the Berry (1929), and Nella Larson’s Quicksand (1928) and Passing (1929). Contemporary examples of books about racial passing include Brit Bennett’s The Vanishing Half and Danzy Senna’s Caucasia. Black No More is also cited as an early example of Afrofuturism, a genre of literature that explores Black history and culture through the lens of science fiction. Ralph Ellison’s The Invisible Man (1952), Charles Chesnutt’s The Conjure Woman (1899), and W. E. B. Dubois’s story “The Comet” (1920), have also been cited as early examples of Afrofuturism. Lastly, Schuyler’s other novels include Slaves Today: A Story of Liberia, and Black Empire.
Key Facts about Black No More

Extra Credit for Black No More

Critical Caricatures. While the novel is known for its satiric bite and science fiction elements, it also caricatures many prominent Black American figures of the 1920s including W. E. B. Du Bois, Marcus Garvey, and James Weldon Johnson.

Thought-Provoking Products. In a preface, Schuyler explains that his story drew on many products and treatments marketed to Black Americans at the time of his writing. These included “Kink-No-More,” a product for African American hair; a treatment from a Japanese doctor who claimed he could change African American and Asian people into “a race of tall, blue-eyed blonds”; and an electrical engineer who claimed that a surplus of pigment in the skin could be removed to make African American people white. 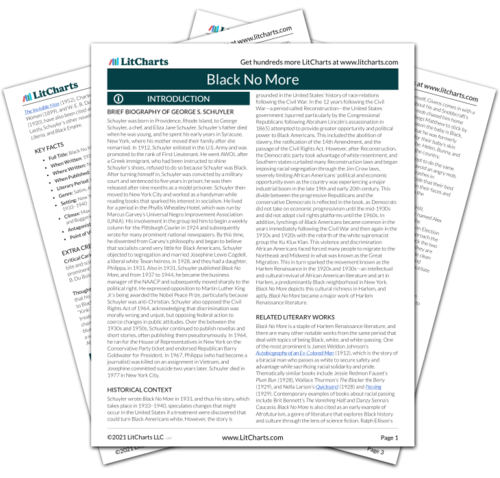 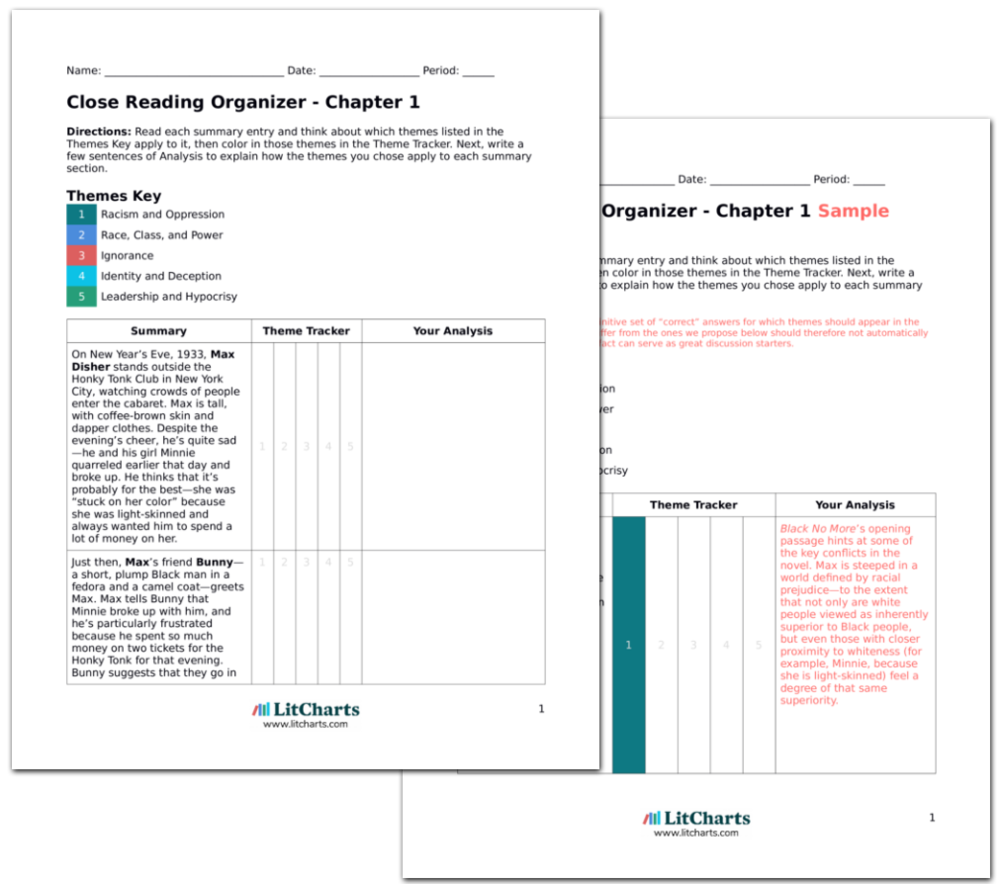