Download this LitChart! (PDF)
Teachers and parents! Struggling with distance learning? Our Teacher Edition on Caesar and Cleopatra can help.

Welcome to the LitCharts study guide on George Bernard Shaw's Caesar and Cleopatra. Created by the original team behind SparkNotes, LitCharts are the world's best literature guides.

A concise biography of George Bernard Shaw plus historical and literary context for Caesar and Cleopatra.

A quick-reference summary: Caesar and Cleopatra on a single page.

In-depth summary and analysis of every act of Caesar and Cleopatra. Visual theme-tracking, too.

Explanations, analysis, and visualizations of Caesar and Cleopatra's themes.

Description, analysis, and timelines for Caesar and Cleopatra's characters.

Explanations of Caesar and Cleopatra's symbols, and tracking of where they appear.

An interactive data visualization of Caesar and Cleopatra's plot and themes.

George Bernard Shaw was an Irish playwright, critic, and political activist. He was born in Dublin in 1856, the youngest of three children. Shaw’s mother left Shaw’s father and moved with her daughters, Shaw’s two sisters, to London in 1872. Shaw joined them there in 1876, determined to establish himself as a writer. Shaw’s early years in London were characterized by failure and frustration. Publishers rejected his attempts at fiction, and he relied on his mother’s financial support to make ends meet. Despite these initial career failures, Shaw’s early years in London were also a period of immense personal and philosophical growth for the struggling writer: he became a socialist and joined the Fabian Society, a new socialist organization that sought to reform English society through a transformation of its intellectual and political culture. In 1885, Shaw found work as a journalist and music critic, enabling him, at long last, to write for a living. His first plays were performed in the early 1890s. Shaw considered these plays “unpleasant,” due to their critical gaze at “unpleasant facts” about British society. He followed these “unpleasant” plays with four “pleasant” plays, such as Arms and the Man (1894), that were more lighthearted and geared toward audience approval than the first set of plays. Caesar and Cleopatra is considered Shaw’s first great play. It belongs to a grouping of plays called Three Plays for Puritans (1901), which focused on the politically relevant issues of empire and imperialism. Shaw went on to write more than 60 plays over the course of his career. Aside from Caesar and Cleopatra, some of his other notable works include Pygmalion (1913) and Saint Joan (1923). He won the Nobel Prize for Literature in 1925. Shaw retired from public life following the death of his wife in 1943. He moved from London to his country home at Ayot St. Lawrence, where he would die, in 1950, at the age of 94.
Get the entire Caesar and Cleopatra LitChart as a printable PDF.
"My students can't get enough of your charts and their results have gone through the roof." -Graham S.
Download 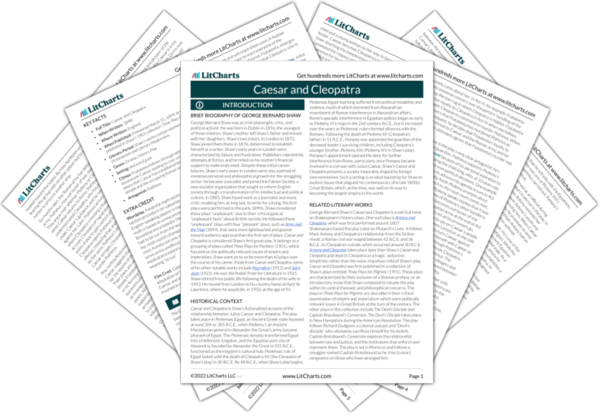 Historical Context of Caesar and Cleopatra

Caesar and Cleopatra is Shaw’s fictionalized account of the relationship between Julius Caesar and Cleopatra. The play takes place in Ptolemaic Egypt, an Ancient Greek state founded around 304 or 305 B.C.E., when Ptolemy I, an Ancient Macedonian general in Alexander the Great’s army, became pharaoh of Egypt. The Ptolemaic dynasty transformed Egypt into a Hellenistic kingdom, and the Egyptian port city of Alexandria, founded by Alexander the Great in 331 B.C.E., functioned as the kingdom’s cultural hub. Ptolemaic rule of Egypt lasted until the death of Cleopatra VII (the Cleopatra of Shaw’s play) in 30 B.C.E. By 48 B.C.E., when Shaw’s play begins, Ptolemaic Egypt had long suffered from political instability and violence, much of which stemmed from Alexandrian resentment of Roman interference in Alexandrian affairs. Rome’s sporadic interference in Egyptian politics began as early as Ptolemy VI’s reign in the 2nd-century B.C.E., but it increased over the years as Ptolemaic rulers formed alliances with the Romans. Following the death of Ptolemy XII (Cleopatra’s father) in 51 B.C.E., Pompey was appointed the guardian of the deceased leader’s surviving children, including Cleopatra’s younger brother, Ptolemy XIII (Ptolemy XIV in Shaw’s play). Pompey’s appointment opened the door for further interference from Rome, particularly once Pompey became involved in a civil war with Julius Caesar. Shaw’s Caesar and Cleopatra presents a society inexorably shaped by foreign interventionism. Such a setting is an ideal backdrop for Shaw to explore issues that plagued his contemporary (the late 1800s) Great Britain, which, at the time, was well on its way to becoming the largest empire in the world.

Other Books Related to Caesar and Cleopatra

George Bernard Shaw’s Caesar and Cleopatra is a satirical twist on Shakespeare’s history plays. One such play is Antony and Cleopatra, which was first performed around 1607. Shakespeare based the play’s plot on Plutarch’s Lives. It follows Mark Antony and Cleopatra’s relationship from the Sicilian revolt, a Roman civil war waged between 42 B.C.E. and 36 B.C.E., to Cleopatra’s suicide, which occurred around 30 B.C.E. Antony and Cleopatra takes place later than Shaw’s Caesar and Cleopatra and depicts Cleopatra as a tragic, seductive temptress rather than the naive, impulsive child of Shaw’s play. Caesar and Cleopatra was first published in a collection of Shaw’s plays entitled Three Plays for Pilgrims (1901). These plays are characterized by their inclusion of a Shavian preface, or an introductory essay that Shaw composed to situate the play within its central thematic and philosophical concerns. The plays in Three Plays for Pilgrims are also alike in their critical examination of empire and imperialism, which were politically relevant issues in Great Britain at the turn of the century. The other plays in this collection include The Devil’s Disciple and Captain Brassbound’s Conversion. The Devil’s Disciple takes place in New Hampshire during the American Revolution. The play follows Richard Dudgeon, a colonial outcast and “Devil’s disciple” who ultimately sacrifices himself for his beliefs. Captain Brassbound’s Conversion explores the relationship between law and justice, and the institutions that enforce and represent them. The play is set in Morocco and follows a smuggler named Captain Brassbound as he tries to exact vengeance on those who have wronged him.
Key Facts about Caesar and Cleopatra

Extra Credit for Caesar and Cleopatra

Wordplay. A popular myth exists that states that the cesarean section procedure (or caesarian section, as it’s called in many English-speaking places) is named after Julius Caesar. This myth is based on a misconception put forth in the 10th-century Byzantine encyclopedia The Suda, which describes how Caesar had to be cut from the womb when his mother, Aurelia, died in her ninth month of pregnancy. This can’t be true, however, since Aurelia not only survived Caesar’s birth but went on to serve as his unofficial political advisor. It’s more likely that the medical procedure’s name comes from the Latin word caedere, meaning “to cut.”

Film Cred. Gabriel Pascal’s 1945 film Caesar and Cleopatra is an adaptation of Shaw’s play. The film stars Claude Rains as Caesar and Vivian Leigh as Cleopatra. Shaw was heavily involved in the film’s production. 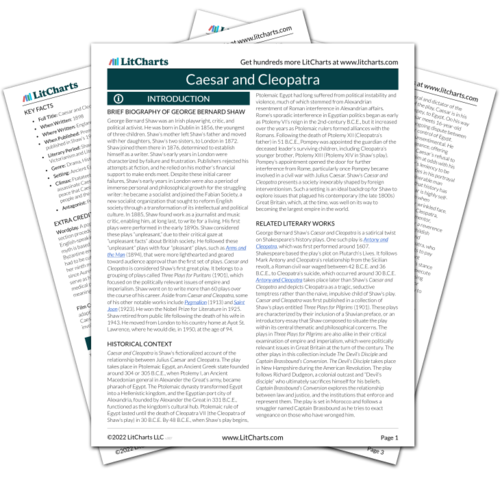 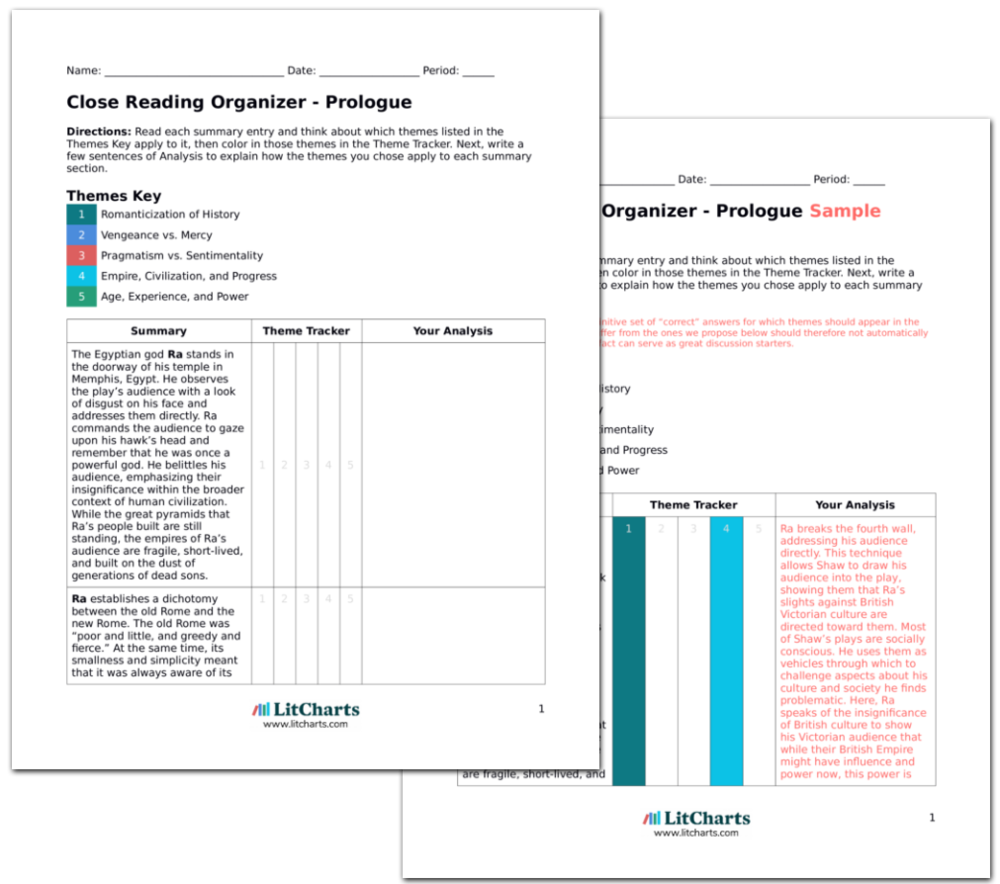