Welcome to the LitCharts study guide on Cate Kennedy's Cake. Created by the original team behind SparkNotes, LitCharts are the world's best literature guides.

A concise biography of Cate Kennedy plus historical and literary context for Cake.

A quick-reference summary: Cake on a single page.

In-depth summary and analysis of every of Cake. Visual theme-tracking, too.

Explanations of Cake's symbols, and tracking of where they appear.

An interactive data visualization of Cake's plot and themes.

Cate Kennedy was born in England, where her father was on a posting with the air force, but moved to Australia with her parents when she was a child. After graduating from the University of Canberra with a BA in literature, she worked as a community arts organizer, a waitress, a kitchenhand, a theater director, and a writer-in-residence at several schools in Melbourne. She also lived in Central Mexico for two years while teaching literacy to peasant communities with Australian Volunteers International. Kennedy’s writing spans diverse genres—her novel The World Beneath won the People’s Choice Award at the NSW Premier’s Literary Awards in 2010, and her poetry collection The Taste of River Water won the CJ Dennis Prize in 2011. However, she is most well known for her short stories. Her collection Dark Roots was shortlisted for the Steele Rudd Award and her collection Like a House on Fire won the award a few years later. She currently resides in Victoria, Australia.
Get the entire Cake LitChart as a printable PDF.
"My students can't get enough of your charts and their results have gone through the roof." -Graham S.
Download 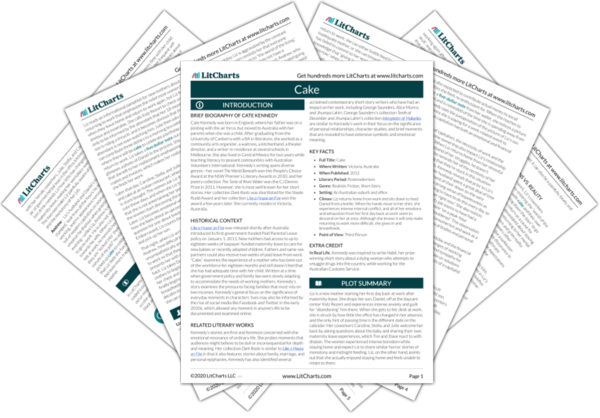 Like a House on Fire was released shortly after Australia introduced its first government-funded Paid Parental Leave policy on January 1, 2011. New mothers had access to up to eighteen weeks of taxpayer-funded maternity leave to care for new babies or recently adopted children. Fathers and same-sex partners could also receive two weeks of paid leave from work. “Cake,” examines the experience of a mother who has been out of the workforce for eighteen months and still doesn’t feel that she has had adequate time with her child. Written at a time when government policy and family law were slowly adapting to accommodate the needs of working mothers, Kennedy’s story examines the pressures facing families that must rely on two incomes. Kennedy’s general focus on the significance of everyday moments in characters’ lives may also be informed by the rise of social media like Facebook and Twitter in the early 2010s, which allowed any moment in anyone’s life to be documented and examined online.

Other Books Related to Cake

Kennedy’s stories are first and foremost concerned with the emotional resonance of ordinary life. She probes moments that audiences might believe to be dull or inconsequential for depth and meaning. Her collection Dark Roots is similar to Like a House on Fire in that it also features stories about family, marriage, and personal epiphanies. Kennedy has also identified several acclaimed contemporary short story writers who have had an impact on her work, including George Saunders, Alice Munro, and Jhumpa Lahiri. George Saunders’s collection Tenth of December and Jhumpa Lahiri’s collection Interpreter of Maladies are similar to Kennedy’s work in their focus on the significance of personal relationships, character studies, and brief moments that are revealed to have extensive symbolic and emotional meaning.
Key Facts about Cake

In Real Life. Kennedy was inspired to write Habit, her prize-winning short story about a dying woman who attempts to smuggle drugs into the country, while working for the Australian Customs Service. 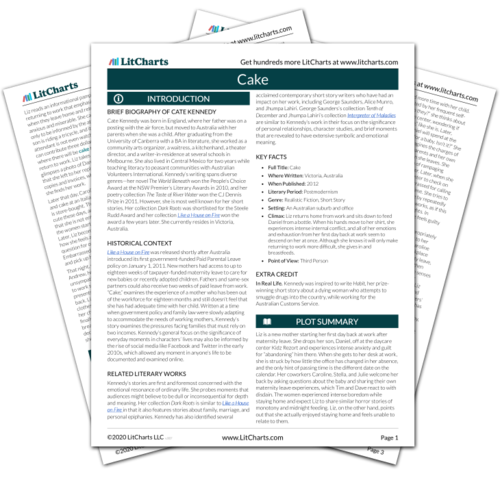 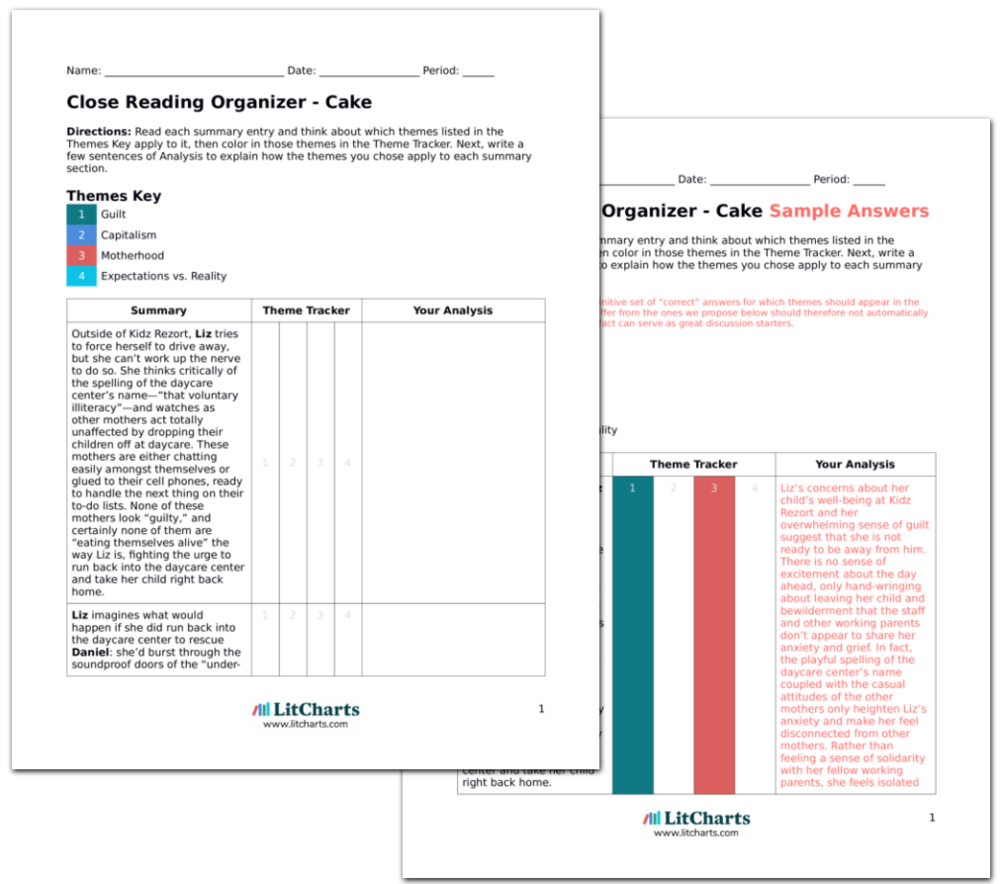