Download this LitChart! (PDF)
Teachers and parents! Struggling with distance learning? Our Teacher Edition on Charlotte’s Web can help.

Get LitCharts A+
The local doctor. He advises Mrs. Arable when she comes to him out of concern for Fern, who has been spending all of her time at the Zuckerman farm “talking” with the animals. Dr. Dorian assures Mrs. Arable that Fern will grow up when she’s ready, and shouldn’t be rushed.

The Charlotte’s Web quotes below are all either spoken by Dr. Dorian or refer to Dr. Dorian. For each quote, you can also see the other characters and themes related to it (each theme is indicated by its own dot and icon, like this one:

“I worry about Fern,” [Mrs. Arable] said. “Did you hear the way she rambled on about the animals, pretending that they talked?”

Mr. Arable chuckled. “Maybe they do talk,” he said. “I’ve sometimes wondered. At any rate, don’t worry about Fern—she’s just got a lively imagination. Kids think they hear all sorts of things.”

“Just the same, I do worry about her,” replied Mrs. Arable. “I think I shall ask Dr. Dorian about her the next time I see him. He loves Fem almost as much as we do, and I want him to know how queerly she is acting about that pig and everything. I don’t think it’s nor mal. You know perfectly well animals don’t talk.”

Mr. Arable grinned. “Maybe our ears aren’t as sharp as Fern’s,” he said.

“I never heard one say anything,” he replied. “But that proves nothing. It is quite possible that an animal has spoken civilly to me and that I didn’t catch the remark because I wasn’t paying attention. Children pay better attention than grownups. If Fern says that the animals in Zuckerman’s barn talk, I’m quite ready to believe her. Perhaps if people talked less, animals would talk more. People are incessant talkers—I can give you my word on that.”

“Do you think she’ll ever start thinking about something besides pigs and sheep and geese and spiders?”

“Well,” said Dr. Dorian, “I think she will always love animals. But I doubt that she spends her entire life in Homer Zuckerman’s barn cellar. How about boys— does she know any boys?”

Dr. Dorian closed his eyes again and went into deep thought. “Henry Fussy,” he mumbled. “Hmm. Remarkable. Well, I don’t think you have anything to worry about. Let Fern associate with her friends in the bam if she wants to. I would say, offhand, that spiders and pigs were fully as interesting as Henry Fussy. Yet I predict that the day will come when even Henry will drop some chance remark that catches Fern’s attention. It’s amazing how children change from year to year.”

Unlock with LitCharts A+
Get the entire Charlotte’s Web LitChart as a printable PDF.
"My students can't get enough of your charts and their results have gone through the roof." -Graham S.
Download 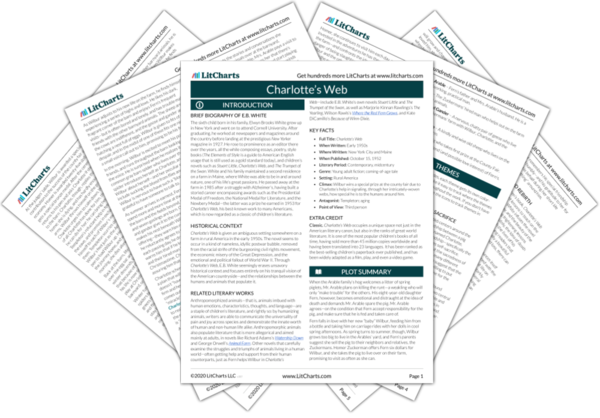 The timeline below shows where the character Dr. Dorian appears in Charlotte’s Web. The colored dots and icons indicate which themes are associated with that appearance.

...that Fern simply has a “lively imagination.” Mrs. Arable wonders if she should talk to Dr. Dorian about Fern, but Mr. Arable simply wonders if their ears “aren’t as sharp as Fern’s.” (full context)

...to the Zuckermans’. Mrs. Arable decides that it is time to pay a visit to Dr. Dorian , and heads into town to his office. (full context) 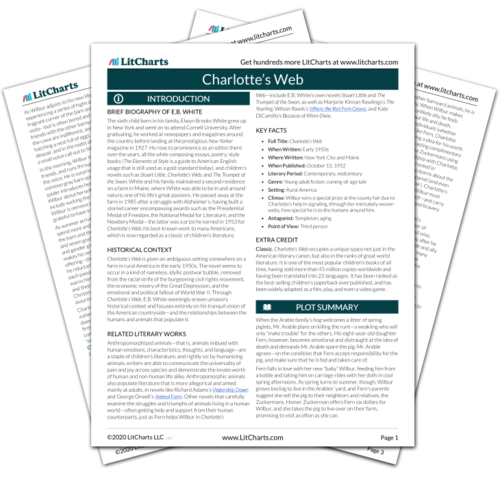 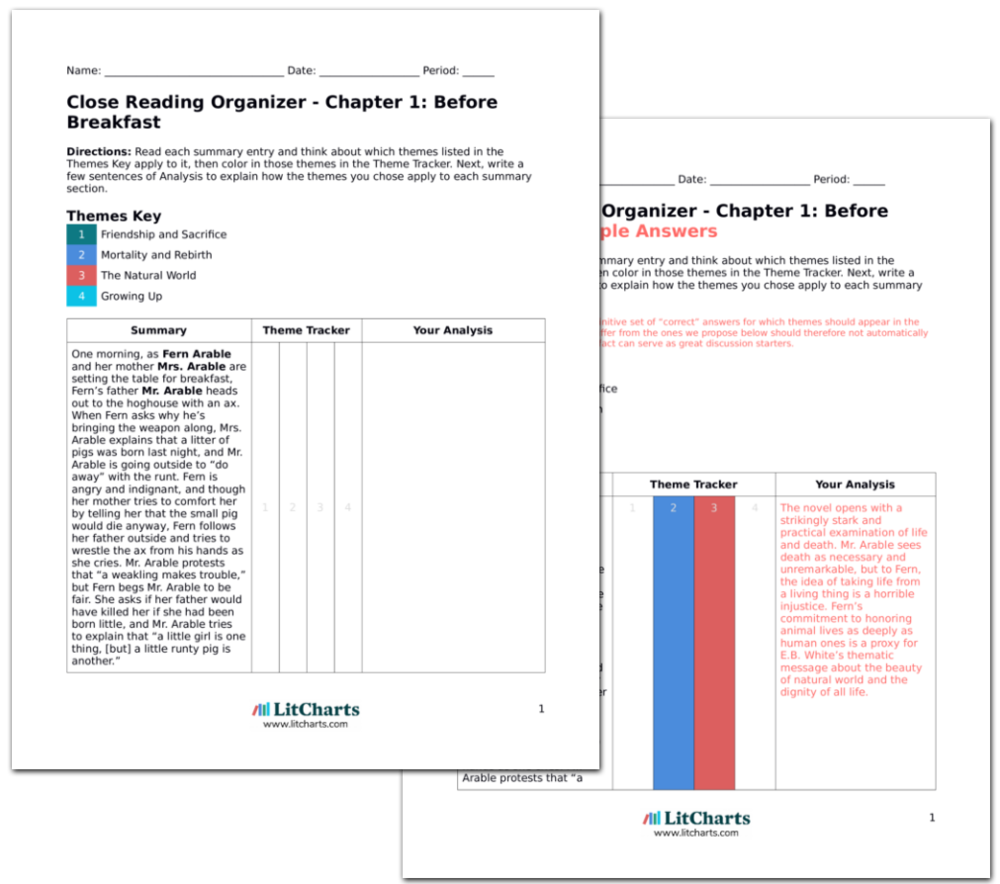