Download this LitChart! (PDF)
Teachers and parents! Struggling with distance learning? Our Teacher Edition on Chinese Cinderella can help.

Welcome to the LitCharts study guide on Adeline Yen Mah's Chinese Cinderella. Created by the original team behind SparkNotes, LitCharts are the world's best literature guides.

A concise biography of Adeline Yen Mah plus historical and literary context for Chinese Cinderella.

A quick-reference summary: Chinese Cinderella on a single page.

In-depth summary and analysis of every chapter of Chinese Cinderella. Visual theme-tracking, too.

Explanations of Chinese Cinderella's symbols, and tracking of where they appear.

An interactive data visualization of Chinese Cinderella's plot and themes.

Adeline Yen Mah was born in Tianjin, China, the fifth child of a wealthy businessman and an accountant. Yen Mah’s mother died of a fever two weeks after her birth, due to birthing complications. Because of this, Yen Mah was considered to be bad luck by her family members and she was mistreated by most of her siblings for her entire childhood. A year after his first wife’s death, Yen Mah’s father married a very young half-French, half-Chinese woman and had two more children with her. As described in Chinese Cinderella, Yen Mah’s stepmother despised her stepchildren and was vicious in her mistreatment of them, creating an abusive and fearful home environment. Yen Mah spent much of her childhood in and out of boarding schools, often being moved around due to the Japanese occupation of China and Mao Zedong’s march of Communism across the country, which caused many civilians to flee their homes. Though her father mostly neglected her, Yen Mah was a top student all throughout her childhood. After she won an international playwriting competition, her father decided to send her to England to study medicine, offering her an escape from her dismal childhood and abusive home. Yen Mah left China in 1952 to study at the London Hospital Medical School and, after completing her studies, established her medical practice as an anesthesiologist in California. When Yen Mah’s father died, her stepmother forbade his children to read his will. After her stepmother’s death two years later, Yen Mah discovered that she had been disinherited by her parents. She wrote about the period from her childhood up until discovering that she had been disinherited in her 1997 memoir, Falling Leaves, which went on to become a New York Times bestseller and was translated into over twenty languages. The memoir’s success encouraged Yen Mah to end her medical career and commit herself to being an author. Two years later, Yen Mah published Chinese Cinderella as an abridged version of her memoir, covering only her childhood and aimed at a slightly younger audience. This too was a huge financial success and won a number of literary awards. Yen Mah wrote several more books for children and young adults, as well as a reflection on Chinese traditional philosophy and medicine. She also founded and heads the Falling Leaves Foundation, a cultural institution dedicated to promoting the study of Chinese history and language. Yen Mah has married twice and has two children.
Get the entire Chinese Cinderella LitChart as a printable PDF.
"My students can't get enough of your charts and their results have gone through the roof." -Graham S.
Download 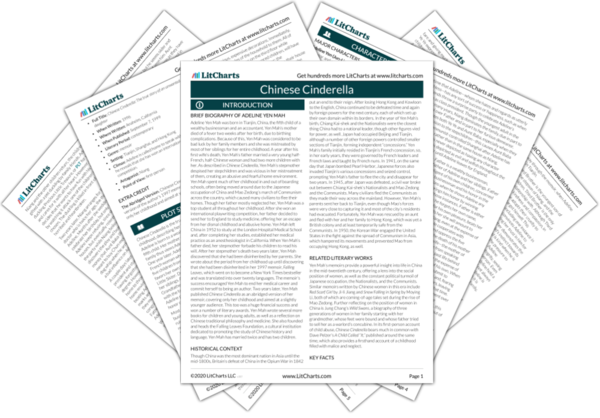 Though China was the most dominant nation in Asia until the mid-1800s, Britain’s defeat of China in the Opium War in 1842 put an end to their reign. After losing Hong Kong and Kowloon to the English, China continued to be defeated time and again by foreign powers for the next century, each of which set up their own domain within its borders. In the year of Yen Mah’s birth, Chiang Kai-shek and the Nationalists were the closest thing China had to a national leader, though other figures vied for power, as well. Japan had occupied Beijing and Tianjin, although a number of other foreign powers controlled smaller sections of Tianjin, forming independent “concessions.” Yen Mah’s family initially resided in Tianjin’s French concession, so, in her early years, they were governed by French leaders and French laws and taught by French nuns. In 1941, on the same day that Japan bombed Pearl Harbor, Japanese forces also invaded Tianjin’s various concessions and seized control, prompting Yen Mah’s father to flee the city and disappear for two years. In 1945, after Japan was defeated, a civil war broke out between Chiang Kai-shek’s Nationalists and Mao Zedong and the Communists. Many civilians fled the Communists as they made their way across the mainland. However, Yen Mah’s parents sent her back to Tianjin, even though Mao’s forces were very close to capturing it and most of the city’s residents had evacuated. Fortunately, Yen Mah was rescued by an aunt and fled with her and her family to Hong Kong, which was yet a British colony and at least temporarily safe from the Communists. In 1950, the Korean War engaged the United States in the fight against the spread of Communism in Asia, which hampered its movements and prevented Mao from occupying Hong Kong, as well.

Other Books Related to Chinese Cinderella

Yen Mah’s memoirs provide a powerful insight into life in China in the mid-twentieth century, offering a lens into the social position of women, as well as the constant political turmoil of Japanese occupation, the Nationalists, and the Communists. Similar memoirs written by Chinese women in this era include Red Scarf Girl by Ji-li Jiang and Snow Falling in Spring by Moying Li, both of which are coming-of-age tales set during the rise of Mao Zedong. Further reflecting on the position of women in China is Jung Chang’s Wild Swans, a biography of three generations of women in her family starting with her grandmother, whose feet were bound and whose father tried to sell her as a warlord’s concubine. In its first-person account of child abuse, Chinese Cinderella bears much in common with Dave Pelzer’s A Child Called “It,” published around the same time, which also provides a firsthand account of a childhood filled with malice and neglect.
Key Facts about Chinese Cinderella

The Abridged Version. Chinese Cinderella is an abridged version of the author’s 1997 memoir, Falling Leaves, covering only her childhood and aimed at young adults. 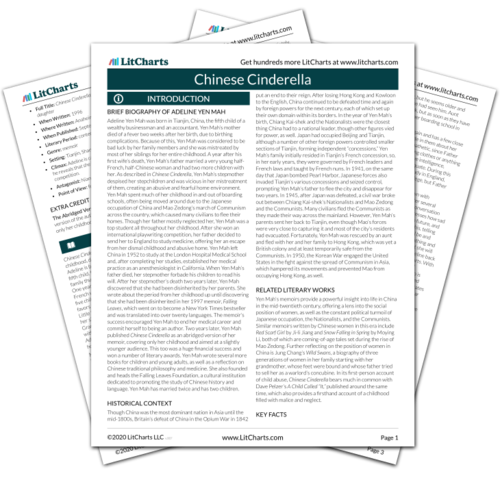 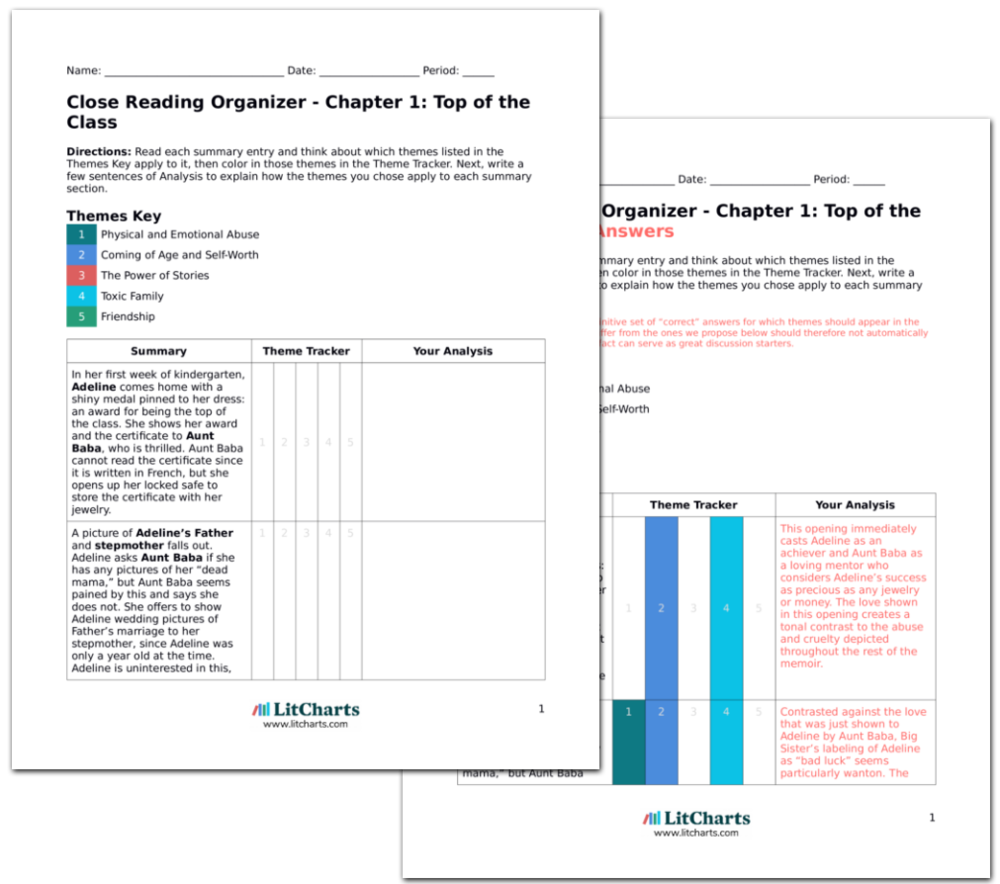