Download this LitChart! (PDF)
Teachers and parents! Struggling with distance learning? Our Teacher Edition on Clay can help.

Welcome to the LitCharts study guide on James Joyce's Clay. Created by the original team behind SparkNotes, LitCharts are the world's best literature guides.

A concise biography of James Joyce plus historical and literary context for Clay.

A quick-reference summary: Clay on a single page.

In-depth summary and analysis of every of Clay. Visual theme-tracking, too.

Explanations of Clay's symbols, and tracking of where they appear.

An interactive data visualization of Clay's plot and themes.

James Joyce was born to Irish Catholic parents and grew up in Rathgar, a suburb of Dublin. He received a Jesuit education and eventually earned a degree in modern languages from University College, Dublin. After graduating in 1902, he moved to Paris and briefly studied medicine, but he soon returned home to Dublin in 1903 due to his mother’s illness. During this visit, he met Nora Barnacle, a woman from Galway with whom he would spend the rest of his life (although they did not marry until 1931). Dissatisfied with the political and religious turmoil in his country during the late nineteenth and early twentieth centuries, Joyce went into self-imposed exile, visiting Dublin only four times throughout the rest of his life and living in various European cities, including Trieste, Pola, and Zürich. Joyce’s first major work was a collection of short stories called Dubliners (1914). As he continued to write, Joyce received guidance from American poet Ezra Pound, who was eventually responsible for the publication of Joyce’s novels A Portrait of the Artist as a Young Man (1916) and Ulysses (1922). Joyce was known for his innovative modernist writing style, which became increasingly esoteric over the course of his writing career. Some consider the realism and free indirect discourse in Dubliners to be a trial run for Joyce’s more avant-garde stream-of-consciousness prose in Ulysses (1922) and Finnegans Wake (1939). In 1941, Joyce died in Zürich, Switzerland after undergoing surgery for an ulcer.
Get the entire Clay LitChart as a printable PDF.
"My students can't get enough of your charts and their results have gone through the roof." -Graham S.
Download 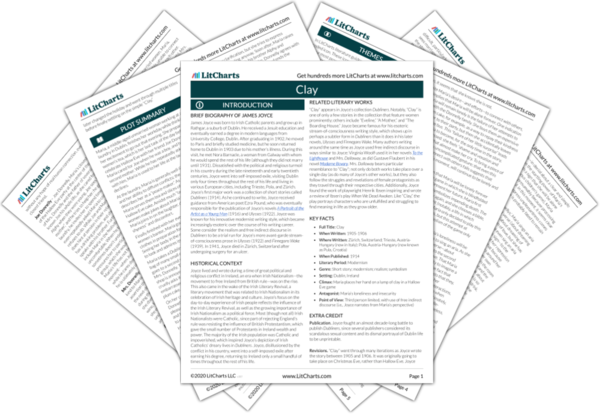 Joyce lived and wrote during a time of great political and religious conflict in Ireland, an era when Irish Nationalism—the movement to free Ireland from British rule—was on the rise. This also came in the wake of the Irish Literary Revival, a literary movement that was related to Irish Nationalism in its celebration of Irish heritage and culture. Joyce’s focus on the day-to-day experience of Irish people reflects the influence of the Irish Literary Revival, as well as the growing importance of Irish Nationalism as a political force. Most (though not all) Irish Nationalists were Catholic, since part of rejecting England’s rule was resisting the influence of British Protestantism, which gave the small number of Protestants in Ireland wealth and power. The majority of the Irish population was Catholic and impoverished, which inspired Joyce’s depiction of Irish Catholics’ dreary lives in Dubliners. Joyce, disillusioned by the conflict in his country, went into a self-imposed exile after earning his degree, returning to Ireland only a small handful of times throughout the rest of his life.

Other Books Related to Clay

“Clay” appears in Joyce’s collection Dubliners. Notably, “Clay” is one of only a few stories in the collection that feature women prominently; others include “Eveline,” “A Mother,” and “The Boarding House.” Joyce became famous for his esoteric stream-of-consciousness writing style, which shows up in perhaps a subtler form in Dubliners than it does in his later novels, Ulysses and Finnegans Wake. Many authors writing around the same time as Joyce used free indirect discourse in ways similar to Joyce: Virginia Woolf used it in her novels To the Lighthouse and Mrs. Dalloway, as did Gustave Flaubert in his novel Madame Bovary. Mrs. Dalloway bears particular resemblance to “Clay”; not only do both works take place over a single day (as do many of Joyce’s other works), but they also follow the struggles and revelations of female protagonists as they travel through their respective cities. Additionally, Joyce found the work of playwright Henrik Ibsen inspiring and wrote a review of Ibsen’s play When We Dead Awaken. Like “Clay,” the play portrays characters who are unfulfilled and struggling to find meaning in life as they grow older.
Key Facts about Clay

Publication. Joyce fought an almost decade-long battle to publish Dubliners, since several publishers considered its scandalous sexual content and its dismal portrayal of Dublin life to be unprintable.

Revisions. “Clay” went through many iterations as Joyce wrote the story between 1905 and 1906. It was originally going to take place on Christmas Eve, rather than Hallow Eve. Joyce later changed the holiday and went through multiple titles before finally settling on the simple “Clay.” 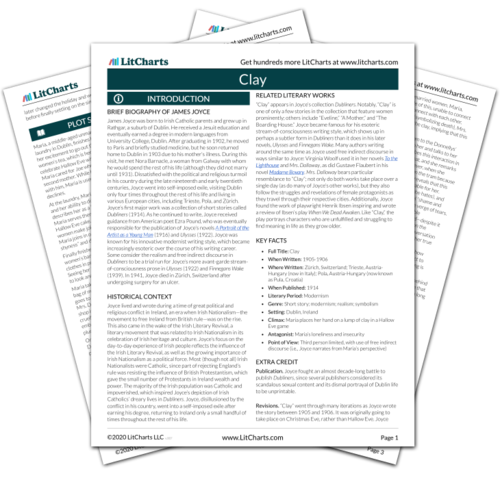 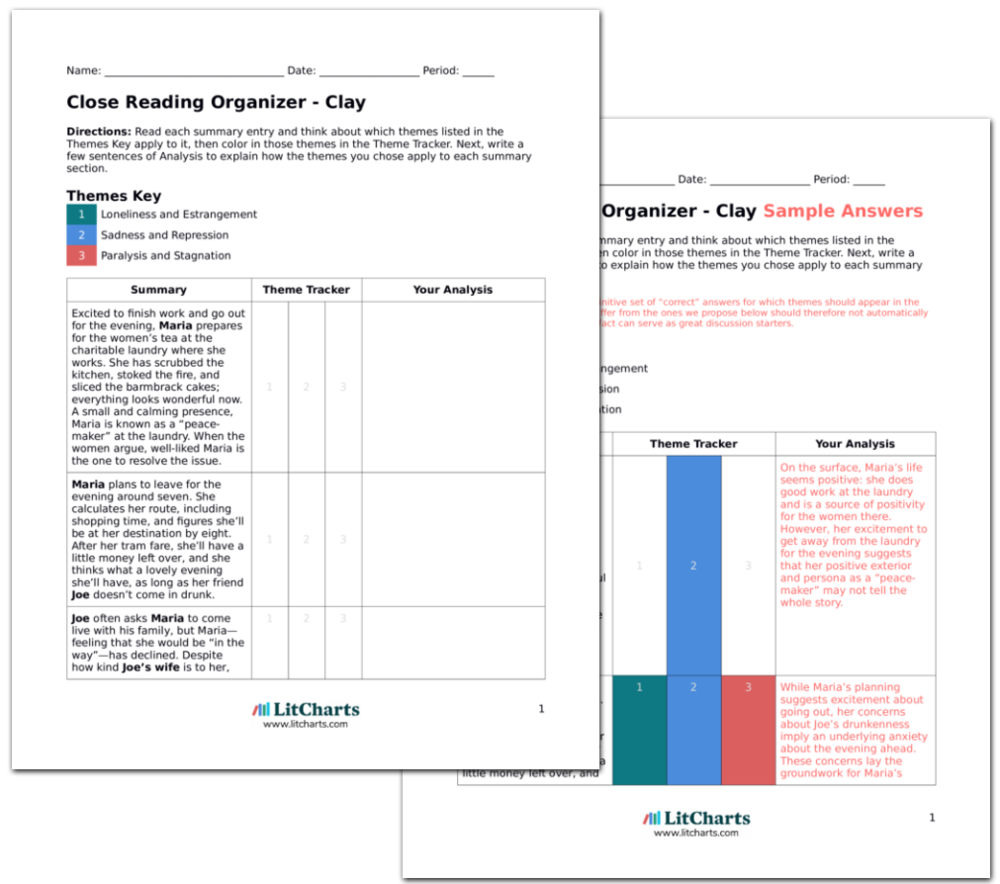