Welcome to the LitCharts study guide on William Shakespeare's Coriolanus. Created by the original team behind SparkNotes, LitCharts are the world's best literature guides.

A concise biography of William Shakespeare plus historical and literary context for Coriolanus.

A quick-reference summary: Coriolanus on a single page.

In-depth summary and analysis of every scene of Coriolanus. Visual theme-tracking, too.

Explanations of Coriolanus's symbols, and tracking of where they appear.

An interactive data visualization of Coriolanus's plot and themes.

Though he is perhaps the most famous writer in history, much of Shakespeare’s life remains a mystery. His father was a glove-maker, and the young Shakespeare received no more than a grammar school education. He married Anne Hathaway in 1582, but left his family behind around 1590 and moved to London, where he became an actor and playwright. He was an immediate success: Shakespeare soon became the most popular playwright of the day as well as a part-owner of the Globe Theater. His theater troupe was adopted by King James as the King's Men in 1603. Shakespeare retired as a rich and prominent man to Stratford-upon-Avon in 1613, and died three years later.
Get the entire Coriolanus LitChart as a printable PDF.
"My students can't get enough of your charts and their results have gone through the roof." -Graham S.
Download 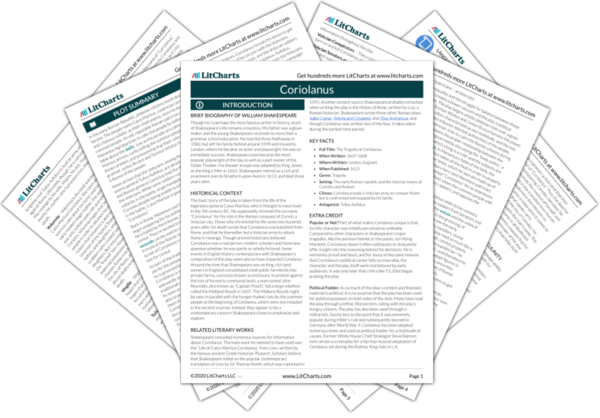 The basic story of the play is taken from the life of the legendary general Caius Martius, who is thought to have lived in the 5th century BC. He supposedly received the surname “Coriolanus” for his role in the Roman conquest of Corioli, a Volscian city. Those who chronicled his life some two hundred years after his death wrote that Coriolanus was banished from Rome, and that he thereafter led a Volscian army to attack Rome in revenge. Though ancient historians believed Coriolanus was a real person, modern scholars and historians question whether he was partly or wholly fictional. Some events in English history contemporary with Shakespeare’s composition of the play seem also to have impacted Coriolanus. Around the time that Shakespeare was writing, rich land owners in England consolidated small public farmlands into private farms, a process known as enclosure. In protest against the loss of formerly communal lands, a man named John Reynolds, also known as “Captain Pouch,” led a large rebellion called the Midland Revolt in 1607. The Midland Revolt might be seen in parallel with the hunger-fueled riots by the common people at the beginning of Coriolanus, which were not included in the ancient sources; instead, they appear to be a contemporary concern Shakespeare chose to emphasize and explore.

Other Books Related to Coriolanus

Shakespeare consulted numerous sources for information about Coriolanus. The main work he seemed to have used was the “Life of Caius Martius Coriolanus,” from Lives, written by the famous ancient Greek historian Plutarch. Scholars believe that Shakespeare relied on the popular contemporary translation of Lives by Sir Thomas North, which was reprinted in 1595. Another ancient source Shakespeare probably consulted when writing the play is the History of Rome, written by Livy, a Roman historian. Shakespeare wrote three other Roman plays: Julius Caesar, Antony and Cleopatra, and Titus Andronicus, and though Coriolanus was written last of the four, it takes place during the earliest time period.
Key Facts about Coriolanus

Popular or Not? Part of what makes Coriolanus unique is that its title character was initially perceived as unlikable. Compared to other characters in Shakespeare’s major tragedies, like the pensive Hamlet or the poetic, terrifying Macbeth, Coriolanus doesn’t often soliloquize or eloquently offer insight into the reasoning behind his decisions. He is extremely proud and blunt, and for many of the same reasons that Coriolanus’s political career fails so miserably, the character and the play itself were not beloved by early audiences. It was only later that critics like T.S. Eliot began praising the play.

Political Fodder. As so much of the play’s content and thematic material is political, it is no surprise that the play has been used for political purposes on both sides of the aisle. Many have read the play through a leftist, Marxist lens, siding with the play’s hungry citizens. The play has also been used through a militaristic, fascist lens to the point that it was extremely popular during Hitler’s rule and subsequently banned in Germany after World War II. Coriolanus has been adapted numerous times and used as political fodder for a multitude of causes. Former White House Chief Strategist Steve Bannon even wrote a screenplay for a hip-hop musical adaptation of Coriolanus set during the Rodney King riots in L.A. 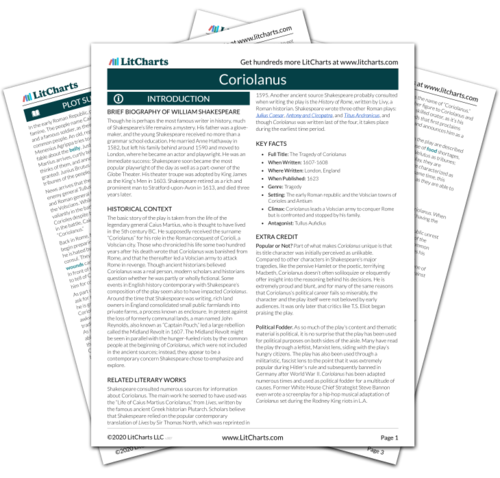 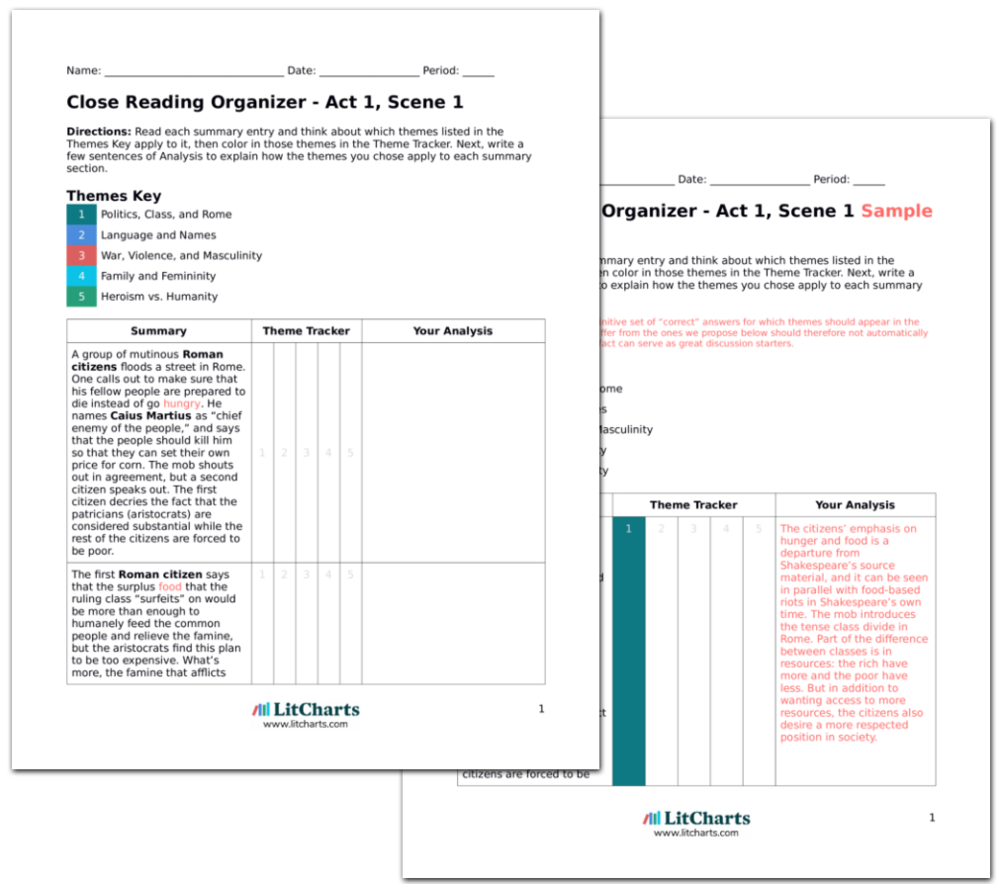