Part One of Dear Justyce is comprised of flashbacks that chart how Quan, the African American protagonist, ended up where he is in the novel’s present: incarcerated for shooting and killing a white cop, Officer Castillo—a crime, readers later find out, that Quan didn’t actually commit. Part One of the book also includes letters that Quan writes to his friend Justyce, a Black boy who grew up in the same impoverished neighborhood but now attends Yale as a prelaw student.

Quan and Justyce meet when they are 9 and 10, after they both run away from home to the rocket ship structure at the new neighborhood playground. Quan ran away because he couldn’t stand to see Mama’s abusive boyfriend, Dwight, beat Mama again.

Two years later, Quan’s life changes forever. Cops violently arrest Daddy for dealing drugs while Quan is staying with Daddy one weekend. At first, Quan vows to be strong for his younger half-siblings, Dasia and Gabe (Mama and Dwight’s kids). But this becomes increasingly difficult when Dwight moves in with Mama full-time, continues to beat her, and seizes control of the family’s finances. Meanwhile, Daddy never responds to Quan’s letters, so Quan feels alone and unsupported—but it’s the final straw for him when Mama believes a teacher’s false accusation that Quan cheated on a math test.

Quan steals for the first time when Dwight leaves Mama and the kids with no money and no food. He begins to steal small things in addition to foodstuffs and is arrested when he’s 13, after he steals a pack of playing cards. After this, Mama treats Quan coldly. Fortunately, Quan met an older boy named Trey and the boys become close friends. Quan continues to steal, is in and out of juvenile detention centers, and serves a yearlong sentence for trying to steal a man’s cellphone to buy shoes for his siblings. When Quan finishes this sentence at age 15, Trey decides it’s time for Quan to join the local gang, Black Jihad.

The leader of Black Jihad, Martel, is a former social worker who now sells arms through his gang. He’s intimidating, but generous. He notices and encourages Quan’s aptitude for math, and when he learns of Dwight’s abuse, he has Dwight murdered. Though Quan is relieved that Dwight is gone, he’s also disturbed to be so indebted to Martel—Dwight’s death means that Quan will never be able to leave the gang. Around this time, Quan discovers that Dwight had been hiding Daddy’s letters to Quan—Daddy has been writing all this time.

One day, while Quan is at Martel’s house, cops arrive to break up Martel’s noisy birthday party. Combative and fearful, Officer Castillo pulls a gun and points it at Martel. Without thinking, Quan panics and pulls out his gun, and chaos ensues. Officer Castillo is shot and dies. A few days later, the police arrest Quan and charge him with murder—of Officer Castillo and of Dwight.

The book jumps forward two years: Quan has been incarcerated for 16 months with no court date in sight. Justyce visited recently, and he and Quan begin writing letters back and forth. In the letters, Quan wonders how he and Justyce ended up in such different places when they started out much the same. He concludes that if he’d had the support that Justyce had, things might’ve been different. Now, he’s getting the support he needs from Doc (his current tutor and Justyce’s former teacher), his counselor, Tay, and his social worker’s intern, Liberty, but it’s too late. Quan knows he’ll be in prison for at least the next decade, assuming he accepts the DA’s plea deal of a shortened sentence. In his final letter to Justyce, though, Quan makes a confession. He’s just been diagnosed with PTSD and panic attacks, so he doesn’t remember everything, but he does know one thing for sure: three other gang members pulled guns the day that Officer Castillo died, and someone else fired the fatal shot. Quan didn’t fire his gun at all. He refuses to say who’s guilty.

The novel shifts to the present and follows both Justyce and Quan. Justyce receives Quan’s final letter in May, right before he heads home for the summer from Yale. On the drive home, he tells his girlfriend SJ and white friend Jared about Quan’s confession. They all agree that they have to prove Quan’s innocence. They realize that this will be complicated: Quan didn’t insist he was innocent to begin with because of his loyalty to Black Jihad. But when Justyce and his friends call a meeting with Quan’s prison support team and SJ’s mom, Adrienne, who’s an attorney, Jared makes an important point: Officer Castillo’s partner has since been killed, so there are no witnesses for the prosecution—and the ballistics analysis should reveal that Quan’s gun didn’t fire the fatal shot.

Justyce visits Quan and convinces him to replace his current lawyer with Adrienne. Following this, Adrienne and Justyce ask the DA to rerun the ballistics analysis, and Quan reveals that his confession of guilt was coerced. He allows himself to feel cautiously optimistic that he’ll go free. At the same time, Quan’s Mama visits him for the first time. She shares that Dasia has been diagnosed with cancer and that Black Jihad is footing the bill for her treatment. As Quan sees it, this means he’s stuck. The only way to stay out of Black Jihad is to stay in prison—but the longer he stays in prison, the more debt he owes the gang. To remedy this, Justyce bravely goes to Martel’s house and asks for Martel to allow Quan to leave the gang. Martel agrees, on the condition that Quan pay his debts—and that Doc tutor young gang members.

One day, guards pull Quan out of a tutoring session for an emergency meeting with Adrienne and Justyce. Adrienne got ahold of the footage of Quan’s interrogations, and it’s clear from the footage that the police intimidated and harassed Quan until he confessed. A few weeks later, due to the lack of any other evidence, the DA drops all charges. Quan can go free.

Upon his release, Quan receives an invoice from Martel. Though Quan sends checks to Martel regularly to pay his debts, Martel curiously never cashes them. Quan spends his first few months out of prison living with Doc and then moves in with Mama, Dasia, and Gabe, who recently moved to the suburbs. He takes a job working for Doc’s new tutoring service and maintains his friendship with Justyce. Six months after his release, he feels he has everything he needs. 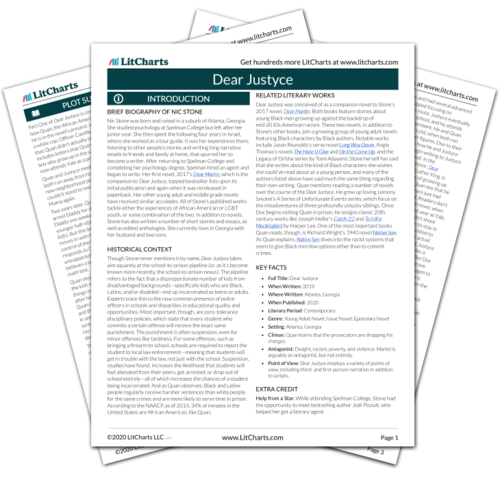 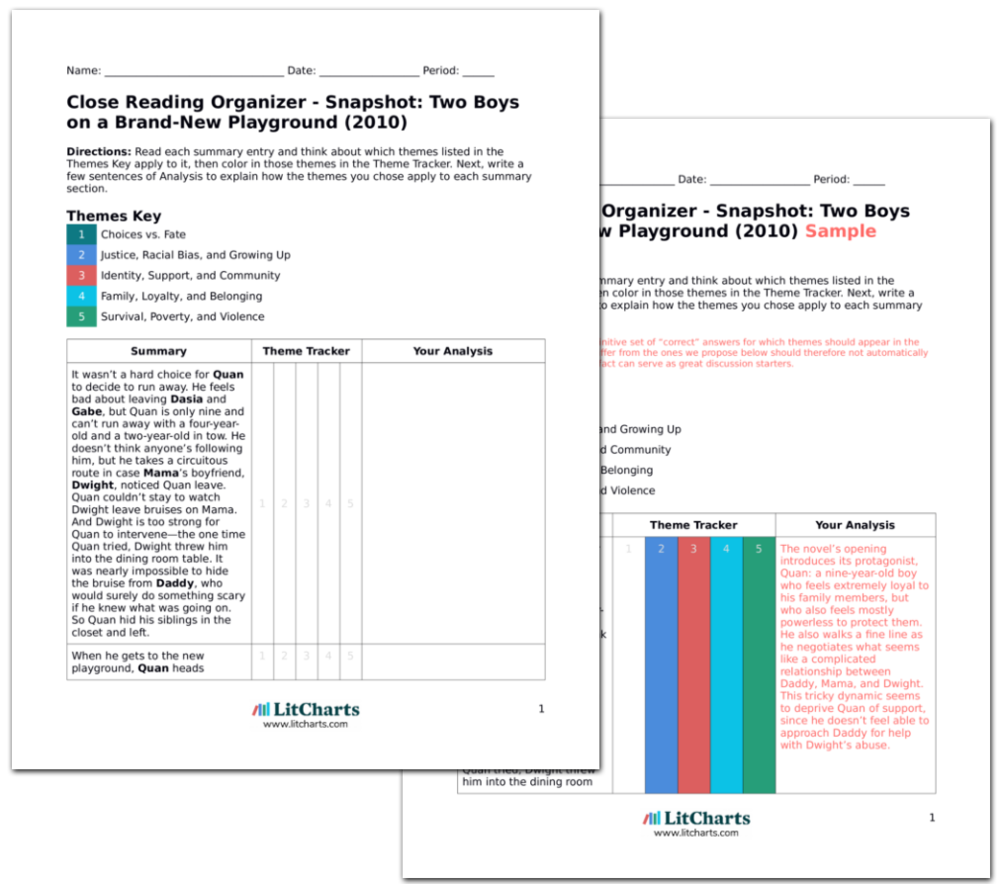