Download this LitChart! (PDF)
Teachers and parents! Struggling with distance learning? Our Teacher Edition on Disgrace can help.

Welcome to the LitCharts study guide on J. M. Coetzee's Disgrace. Created by the original team behind SparkNotes, LitCharts are the world's best literature guides.

A concise biography of J. M. Coetzee plus historical and literary context for Disgrace.

A quick-reference summary: Disgrace on a single page.

In-depth summary and analysis of every chapter of Disgrace. Visual theme-tracking, too.

Explanations of Disgrace's symbols, and tracking of where they appear.

An interactive data visualization of Disgrace's plot and themes.

Coetzee’s youth was spent mostly in Cape Town and Worcester, where he moved (at the age of eight) with his family. He attended the University of Cape Town, where he received bachelor’s degrees in both English and Mathematics. In 1962, Coetzee moved to London, where he worked for IBM as a computer programmer and gained a master’s degree from the University of Cape Town for a thesis on the author Ford Madox Ford. Then, on a Fulbright scholarship, Coetzee went to the University of Texas at Austin in 1965, gaining his PhD in 1969 for a thesis on Samuel Beckett using computerized stylistic analysis. While Coetzee aspired to become a permanent resident of the United States, his participation in anti-Vietnam-War protests ultimately prevented this. He returned to South Africa in the early 70s, where he taught English literature at the University of Cape Town, acquiring various promotions up until his retirement in 2002, when he relocated to Australia. Coetzee has won numerous awards for his novels, including two Booker Prizes (for Life & Times of Michael K and Disgrace) and the Nobel Prize in Literature (in 2003). Coetzee was a vocal denouncer of apartheid in South Africa.
Get the entire Disgrace LitChart as a printable PDF.
"My students can't get enough of your charts and their results have gone through the roof." -Graham S.
Download 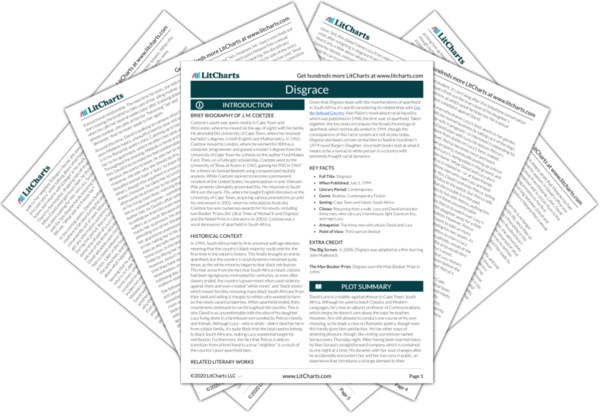 In 1994, South Africa held its first universal suffrage election, meaning that the country’s black majority could vote for the first time in the nation’s history. This finally brought an end to apartheid, but the country’s racial dynamics remained quite tense, as the white minority began to fear black retribution. This fear arose from the fact that South Africa’s black citizens had been egregiously mistreated for centuries, as even after slavery ended, the country’s government often used violence against them and even created “white zones” and “black zones,” which meant forcibly removing many black South Africans from their land and selling it cheaply to whites who wanted to farm on the newly vacant properties. When apartheid ended, then, resentment continued to run throughout the country. This is why David is so uncomfortable with the idea of his daughter Lucy living alone in a farmhouse surrounded by Petrus’s family and friends. Although Lucy—who is white—didn’t steal her farm from a black family, it’s quite likely that the land used to belong to black South Africans, making Lucy a potential target for retribution. Furthermore, the fact that Petrus is able to transition from a hired hand to a true “neighbor” is a result of the country’s post-apartheid laws.

Other Books Related to Disgrace

Given that Disgrace deals with the reverberations of apartheid in South Africa, it’s worth considering its relationship with Cry, the Beloved Country, Alan Paton’s novel about racial injustice, which was published in 1948, the first year of apartheid. Taken together, the two texts encompass the broad chronology of apartheid, which technically ended in 1994, though the consequences of this racist system are still at play today. Disgrace also bears certain similarities to Nadine Gordimer’s 1979 novel Burger’s Daughter, since both books look at what it means to be a nonracist white person in a country with extremely fraught racial dynamics.
Key Facts about Disgrace

The Big Screen. In 2008, Disgrace was adapted as a film starring John Malkovich. 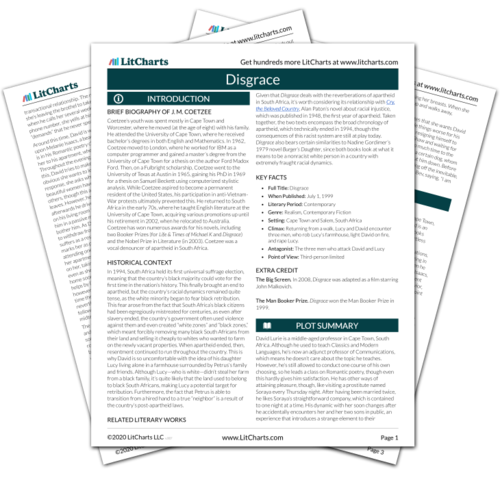 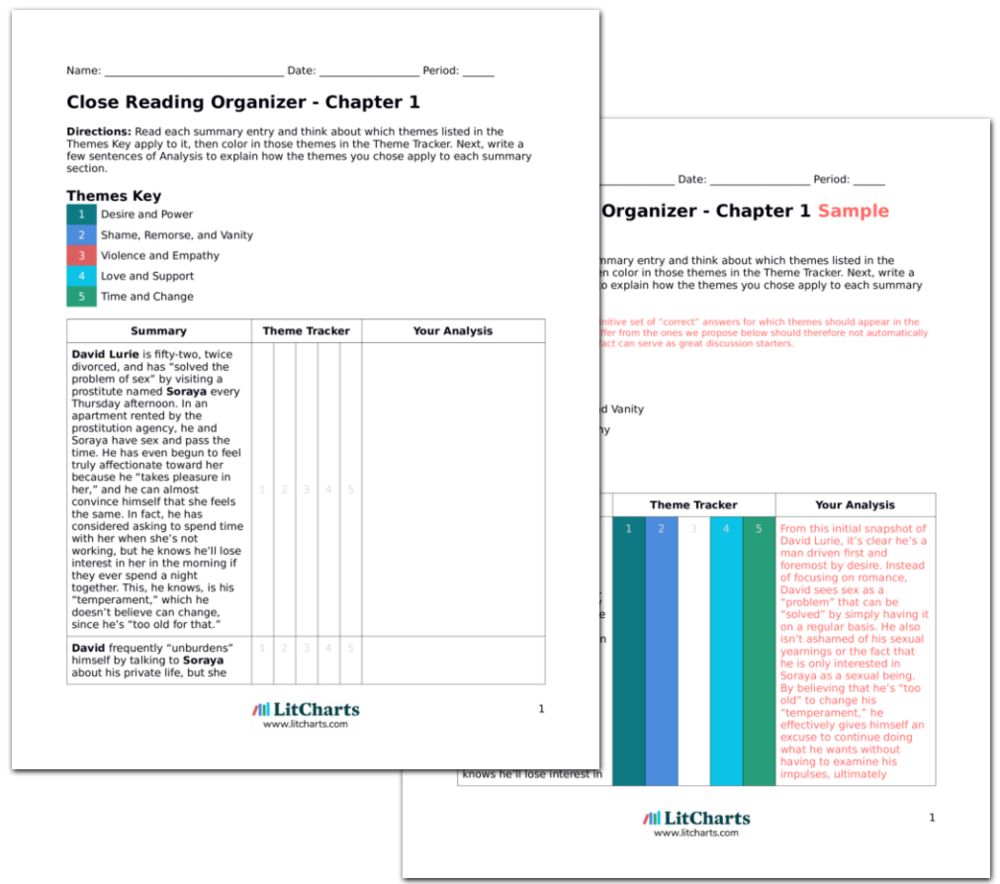