Download this LitChart! (PDF)
Teachers and parents! Struggling with distance learning? Our Teacher Edition on Five-Dollar Family can help.

Welcome to the LitCharts study guide on Cate Kennedy's Five-Dollar Family. Created by the original team behind SparkNotes, LitCharts are the world's best literature guides.

A concise biography of Cate Kennedy plus historical and literary context for Five-Dollar Family.

A quick-reference summary: Five-Dollar Family on a single page.

In-depth summary and analysis of every of Five-Dollar Family. Visual theme-tracking, too.

Explanations of Five-Dollar Family's symbols, and tracking of where they appear.

An interactive data visualization of Five-Dollar Family's plot and themes.

Cate Kennedy was born in Louth, Lincolnshire, England, where her father was on a posting with the air force. She returned to Australia in her childhood and lived in several states around the country with her family. After graduating with a BA in literature from the University of Canberra, she worked a wide variety of jobs, including for the Australian Customs Service, as a tutor, waitress, life model, kitchenhand, community arts worker, theatre director, and for a microcredit cooperative for peasant farmers in Mexico. These experiences have fed into her writing: in 2005, she published the travel memoir Sing and Don’t Cry about her time in Mexico, and her short story “Habit” (2001), which tells the story of a woman who dies while smuggling Cocaine across the border, is inspired by her time working for the Customs service. Kennedy’s writing has spanned a variety of genres, including fiction, non-fiction and poetry, but she is best known for her short fiction. In 2001, she published her first collection of short stories, Dark Roots, to critical acclaim. Her latest collection of short stories, Like a House on Fire, was shortlisted for the prestigious Stella prize in 2013. Cate Kennedy teaches creative writing in schools and Universities across Australia. She lives on a farm on the Broken River in North-East Victoria.
Get the entire Five-Dollar Family LitChart as a printable PDF.
"My students can't get enough of your charts and their results have gone through the roof." -Graham S.
Download 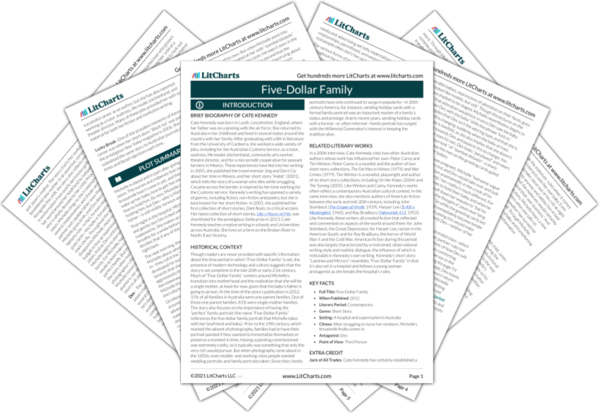 Though readers are never provided with specific information about the time period in which “Five-Dollar Family” is set, the presence of modern technology and culture suggests that the story is set sometime in the late 20th or early 21st century. Much of “Five-Dollar Family” centers around Michelle’s transition into motherhood and the realization that she will be a single mother, at least for now, given that the baby’s father is going to prison. At the time of the story’s publication in 2012, 15% of all families in Australia were one-parent families. Out of those one-parent families, 81% were single-mother families. The story also focuses on the importance of having the “perfect” family portrait (the name “Five-Dollar Family” references the five-dollar family portrait that Michelle takes with her boyfriend and baby). Prior to the 19th century, which marked the advent of photography, families had to have their portrait painted if they wanted to immortalize themselves or preserve a moment in time. Having a painting commissioned was extremely costly, so it typically was something that only the very rich would pursue. But when photography came about in the 1850s, even middle- and working-class people wanted wedding portraits and family portraits taken. Since then, family portraits have only continued to surge in popularity—in 20th-century America, for instance, sending holiday cards with a formal family portrait was an important marker of a family’s status and prestige. And in recent years, sending holiday cards with a formal—or often informal—family portrait has surged with the Millennial Generation’s interest in keeping the tradition alive.

Other Books Related to Five-Dollar Family

In a 2006 interview, Cate Kennedy cites two other Australian authors whose work has influenced her own: Peter Carey and Tim Winton. Peter Carey is a novelist and the author of two short story collections, The Fat Man in History (1974) and War Crimes (1979). Tim Winton is a novelist, playwright and author of six short story collections, including On Her Knees (2004) and The Turning (2005). Like Winton and Carey, Kennedy’s works often reflect a contemporary Australian cultural context. In the same interview, she also mentions authors of American fiction between the early and mid-20th century, including John Steinbeck (The Grapes of Wrath, 1939), Harper Lee (To Kill a Mockingbird, 1960), and Ray Bradbury (Fahrenheit 451, 1953). Like Kennedy, these writers all created fiction that reflected and commented on aspects of the world around them: for John Steinbeck, the Great Depression; for Harper Lee, racism in the American South; and for Ray Bradbury, the horror of World War II and the Cold War. American fiction during this period was also largely characterized by a restrained, observational writing style and realistic dialogue, the influence of which is noticeable in Kennedy’s own writing. Kennedy’s short story “Laminex and Mirrors” resembles “Five-Dollar Family” in that it’s also set in a hospital and follows a young woman protagonist as she breaks the hospital’s rules.
Key Facts about Five-Dollar Family

Jack of All Trades. Cate Kennedy has certainly established a successful career as an author, but she has also reported working as a tutor, waitress, life model, kitchenhand, and theater director. Many of these jobs provided her with source material for both her fiction and nonfiction writing.

Lucky Break. One of the proudest moments of Kennedy’s career was when her short story “Black Ice” was published in the prestigious New Yorker magazine in 2006. She had submitted the same story to Australian journals three or four times and faced rejections each time. 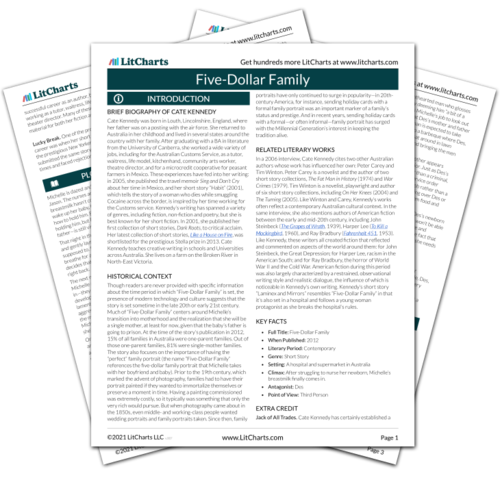 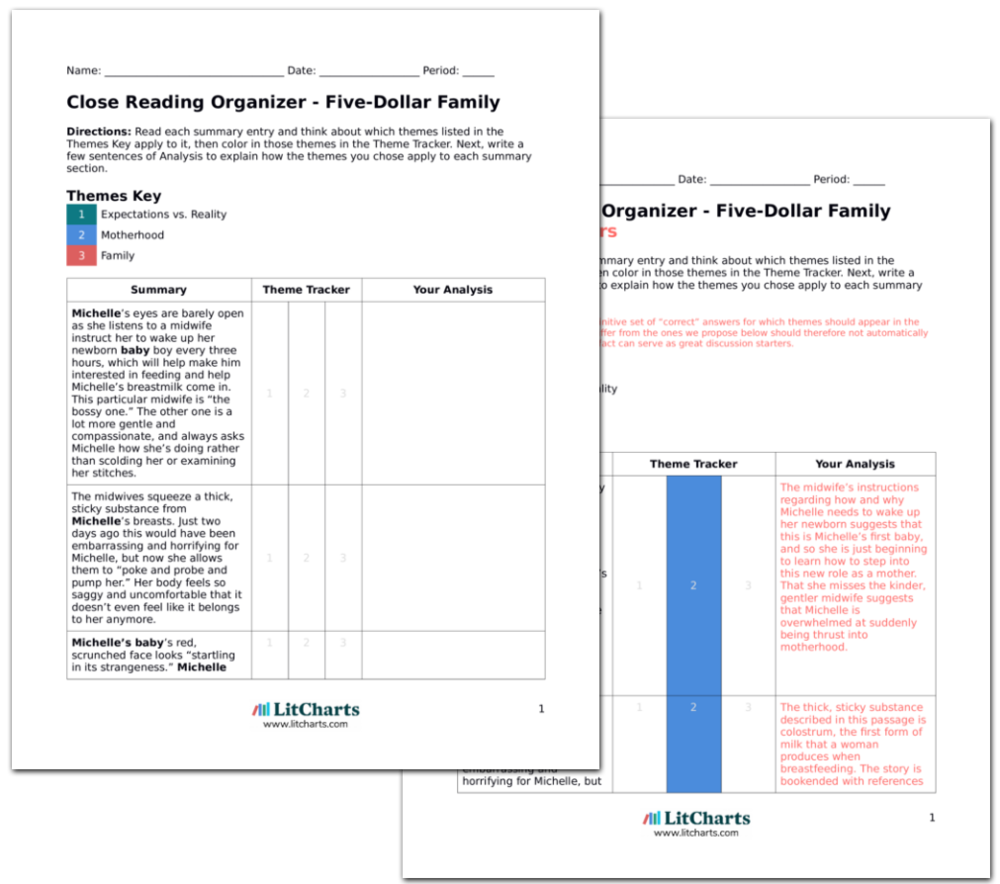