Welcome to the LitCharts study guide on John Steinbeck's Flight. Created by the original team behind SparkNotes, LitCharts are the world's best literature guides.

A concise biography of John Steinbeck plus historical and literary context for Flight.

A quick-reference summary: Flight on a single page.

In-depth summary and analysis of every of Flight. Visual theme-tracking, too.

Explanations of Flight's symbols, and tracking of where they appear.

An interactive data visualization of Flight's plot and themes.

John Steinbeck was born in Salinas, California. He spent much of his youth working on farms and ranches in the area, often alongside migrant workers. His upbringing in this underdeveloped rural settlement was formative for him, inspiring his many stories taking place in the area and even informing his political views concerning the treatment of working-class people in the United States. Steinbeck studied English literature at Stanford University, but he never earned a degree. After failing to have his writing published in New York City, he moved back to California and met his first wife, Carol Henning. The two of them soon moved to a family-owned cottage in Pacific Grove, California, where Steinbeck was able to write without worrying about finding work. Despite this advantage, Steinbeck and his wife still often struggled to make ends meet during the economic downturn of the Great Depression, although they were able to subsist on fishing and growing their own fresh produce. Steinbeck’s experiences in rural California became fertile soil for his realistic and down-to-earth works of fiction, which often focused on the poor, downtrodden, and hardworking people of the area. These include his most famous novels, The Grapes of Wrath and Of Mice and Men, as well as many short stories taking place in similar settings. Steinbeck won the Nobel Prize for literature in 1962, and he was married two more times before he died of heart disease in 1968.
Get the entire Flight LitChart as a printable PDF.
"My students can't get enough of your charts and their results have gone through the roof." -Graham S.
Download 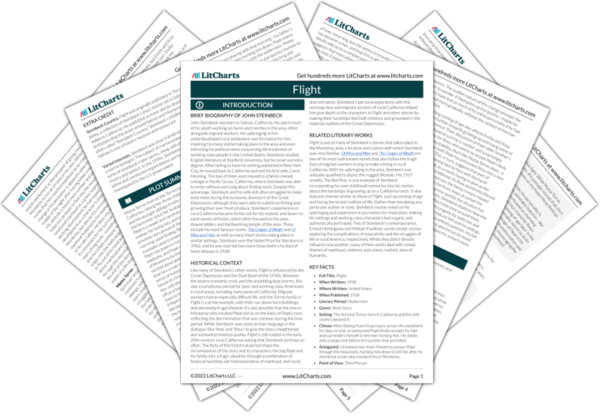 Like many of Steinbeck’s other works, Flight is influenced by the Great Depression and the Dust Bowl of the 1930s. Between the severe economic crisis and the unyielding dust storms, this was a tumultuous period for poor and working-class Americans in rural areas, including many parts of California. Migrant workers had an especially difficult life, and the Torres family in Flight is a prime example, with their run-down farm buildings and extremely frugal lifestyle. It’s also possible that the man in Monterey who insulted Pepé did so on the basis of Pepé’s race, reflecting the discrimination that was common during the time period. While Steinbeck uses some archaic language in the dialogue (like ‘thee’ and ‘thou’) to give the story a heightened and somewhat timeless quality, Flight is still rooted in the early 20th-century rural California setting that Steinbeck portrays so often. The facts of this historical period shape the circumstances of the story and its characters, forcing Pepé and his family into a tragic situation through a combination of financial hardship, old-fashioned ideas of manhood, and racial discrimination. Steinbeck’s personal experience with the working class and migrant workers of rural California helped him give depth to the characters in Flight and other stories by making their hardships feel both timeless and grounded in the material realities of the Great Depression.

Other Books Related to Flight

Flight is one of many of Steinbeck’s stories that takes place in the Monterey area, a location and culture with which Steinbeck was very familiar. Of Mice and Men and The Grapes of Wrath are two of his most well-known novels that also follow the tragic lives of migrant workers trying to make a living in rural California. With his upbringing in the area, Steinbeck was uniquely qualified to depict this rugged lifestyle. His 1937 novella, The Red Pony, is one example of Steinbeck incorporating his own childhood memories into his stories about the hardships of growing up on a California ranch. It also features themes similar to those of Flight, such as coming of age and facing the brutal realities of life. Rather than emulating any particular author or style, Steinbeck mostly relied on his upbringing and experience in journalism for inspiration, making his settings and working-class characters feel organic and authentically portrayed. Two of Steinbeck’s contemporaries, Ernest Hemingway and William Faulkner, wrote similar stories exploring the complications of masculinity and the struggles of life in rural America, respectively. While they didn’t directly influence one another, many of their works deal with similar themes of manhood, violence, and a keen, realistic view of humanity.
Key Facts about Flight

Varied Interests. Steinbeck was close friends with Ed Ricketts, a marine biologist. The subject of marine biology appeared in some of Steinbeck’s later works, along with discussions of history and politics. In the 1950s, Steinbeck’s affiliation with leftist and communist organizations put him at risk of being investigated by the U.S. government. 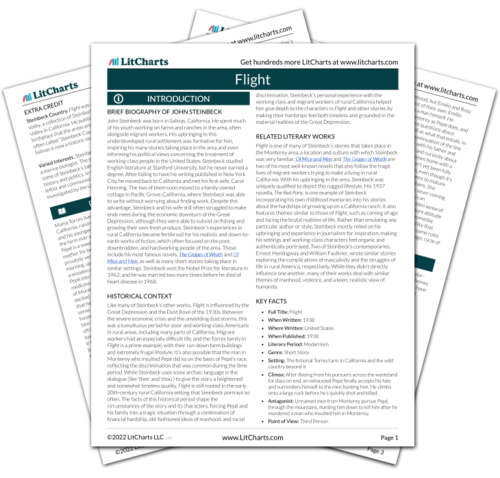 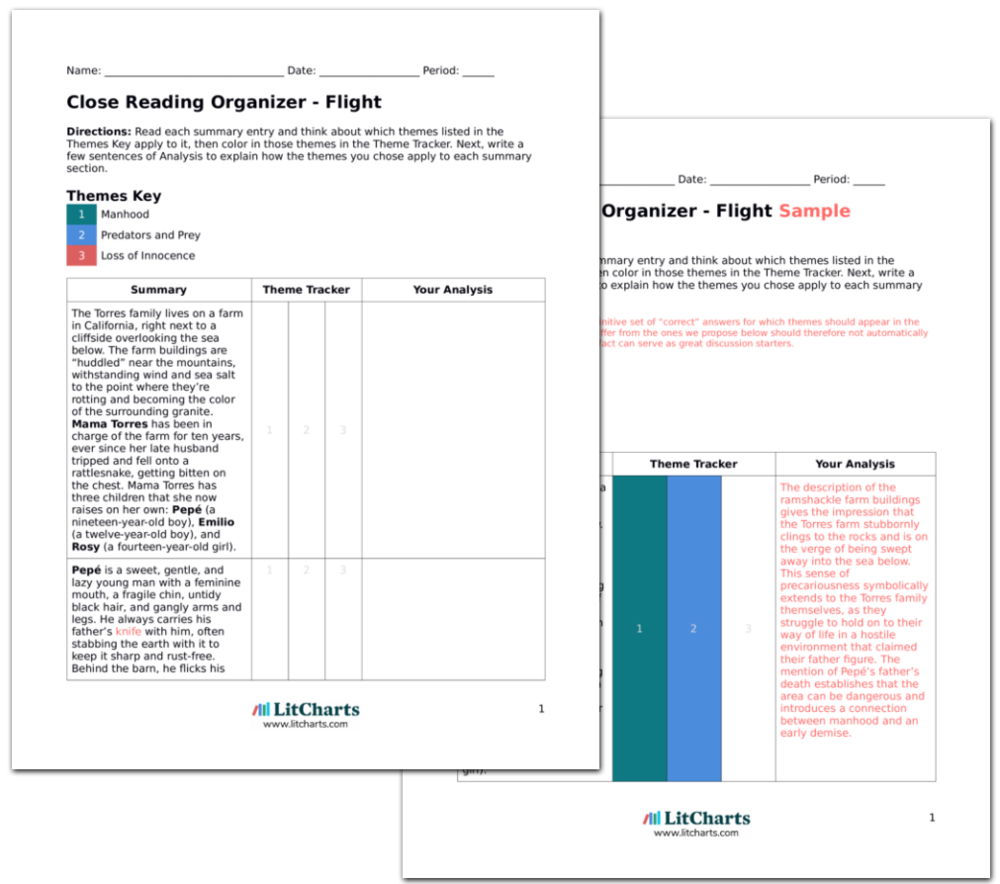