Get LitCharts A+
LitCharts assigns a color and icon to each theme in Good to Great, which you can use to track the themes throughout the work.

The idea that people are an important component of any company or organization is nothing new. However, Jim Collins goes beyond this commonplace wisdom to claim that having the right people in the right roles within a company is an essential foundation without which the company cannot truly succeed. According to Collins’s model, people are the essence of sustainable greatness, rather than just one component of it. However, Collins’s idea of the “right” people rests on the understanding that each individual is unique and will be better suited to some roles and environments than others. Throughout, the book subverts the idea that certain people are inherently better than others; rather, it points out certain positive qualities that most individuals can cultivate and emphasizes the importance of the right fit between an individual and a company.

Although Collins specifically instructed his research team to avoid the common cliché that leadership determines greatness, the team nonetheless found clear empirical evidence for the importance of a certain kind of leader. Having an excellent leader does prove to be a common characteristic of companies that achieve sustained greatness. Collins and his team found that each of the good-to-great companies they studied was led during its period of transformation by what Collins calls a Level 5 Leader—a designation that notably does  not fit the stereotypical mold of the charismatic, revolutionary leader. Rather, Level 5 Leaders blend “extreme personal humility with intense professional will.”

Though Collins does not claim to understand how these individuals develop these qualities, he emphasizes that many people likely have the potential to become Level 5 leaders. For Collins, the “rightness” of these leaders is both crucial and attainable. Additionally, a key characteristic of Level 5 Leaders is an ability to foster success in subsequent generations. By definition, the rightness of these leaders is closely linked to the rightness of the employees they hire and train. Again, Collins shows that “the right people” has as much to do with teamwork and long-term development as it does with innate individual excellence.

Collins also argues that finding the right people is essential for all roles within an organization, not just the leadership. In this case, rightness rests largely on each individual’s passion for the job and eagerness to be part of the company’s overall effort. According to this model, certain individuals are “right” for certain companies and not right for others. Again, this version of rightness puts value on relationships and company culture, rather than personal greatness. Collins notes that great companies take on the burden of finding the right employees by having rigorous hiring practices and knowing when to let go of people who aren’t a good fit. Though he acknowledges that this may seem ruthless, he contends that it is actually an essentially compassionate approach because it lets employees who aren’t a good fit move on quickly to more appropriate opportunities.

According to Collins, prioritizing rightness pays off for everyone, not just for the company. Additionally, Collins notes that having employees who are excited about and invested in their work allows companies to do away with unnecessary bureaucracies and achieve success without tyrannical oversight. In essence, the right people are simply the ones who are motivated to help the company succeed, and finding them means that the company won’t have to waste resources trying to motivate anyone. Again, Collins indicates that anyone can be the right person by finding a job in which they feel genuinely motivated to succeed.

Finally, Collins emphasizes that finding and keeping the right people should happen before a company takes action. In other words, even if a company doesn’t know exactly what it needs to get done, it can still define its core mission and find people who are eager to join that mission. This unusual finding privileges people over action, again subverting conventional business wisdom that elevates decisive action over careful attention to human resources. For example, Collins notes that the good-to-great company Wells Fargo prioritized methodical hiring decisions during a period of immense and unpredictable change in its industry, rather than trying to strategize an approach to the changes themselves. In contrast, direct comparison company Bank of America—which was in the same industry but did not find sustained greatness—prioritized having one strong leader to plan out a response to the change. Even though doing so may have seemed risky at the time, Wells Fargo’s decision to prioritize people over plans led to long-term success. Going off of many examples like Wells Fargo’s, Collins shows again that rightness is closely related to a company’s overall strategy and does not depend on any one definition of individual excellence. For Collins, rightness is about companies and individuals figuring out what motivates them and partnering with each other on the basis of those motivations.

The Importance of the Right People ThemeTracker

The ThemeTracker below shows where, and to what degree, the theme of The Importance of the Right People appears in each chapter of Good to Great. Click or tap on any chapter to read its Summary & Analysis.
How often theme appears:
chapter length:
Chapter
Chapter 1
1
Chapter 2
2
Chapter 3
3
Chapter 4
4
Chapter 5
5
Chapter 6
6
Chapter 7
7
Chapter 8
8
Chapter 9
9
Get the entire Good to Great LitChart as a printable PDF.
"My students can't get enough of your charts and their results have gone through the roof." -Graham S.
Download 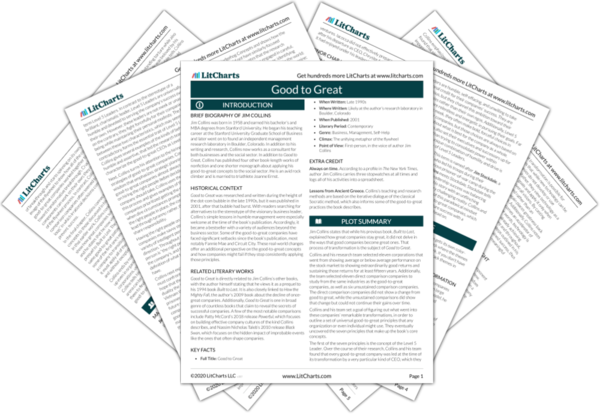 The Importance of the Right People Quotes in Good to Great

Below you will find the important quotes in Good to Great related to the theme of The Importance of the Right People.
Chapter 2  Quotes

Maxwell made it absolutely clear that there would only be seats for A players who were going to put forth an A+ effort, and if you weren’t up for it, you had better get off the bus, and get off now. One executive who had just uprooted his life and career to join Fannie Mae came to Maxwell and said, “I listened to you very carefully, and I don’t want to do this.” He left and went back to where he came from. In all, fourteen of twenty-six executives left the company, replaced by some of the best, smartest, and hardest-working executives in the entire world of finance.

If you have the right executives on the bus, they will do everything in their power to build a great company, not because of what they will “get” for it, but because they simply cannot imagine settling for anything less. Their moral code requires excellence for its own sake, and you’re no more likely to change that with a compensation package than you’re likely to affect whether they breathe. The good-to-great companies understood a simple truth: The right people will do the right things and deliver the best results they’re capable of, regardless of the incentive system.

Members of the good-to-great teams tended to become and remain friends for life. In many cases, they are still in close contact with each other years or decades after working together. It was striking to hear them talk about the transition era, for no matter how dark the days or how big the tasks, these people had fun! They enjoyed each other’s company and actually looked forward to meetings. A number of the executives characterized their years on the good-to-great teams as the high point of their lives. Their experiences went beyond just mutual respect (which they certainly had), to lasting comradeship.

The moment a leader allows himself to become the primary reality people worry about, rather then reality being the primary reality, you have a recipe for mediocrity, or worse. This is one of the key reasons why less charismatic leaders often produce better long-term results than their more charismatic counterparts.

“The optimists? I don’t understand,” I said, now completely confused, given what he’d said a hundred meters earlier.

Unlock with LitCharts A+
Chapter 5  Quotes

It may seem odd to talk about something as soft and fuzzy as “passion” as an integral part of a strategic framework. But throughout the good-to-great companies, passion became a key part of the Hedgehog Concept. You can’t manufacture passion or “motivate” people to feel passionate. You can only discover what ignites your passion and the passions of those around you.

Unlock with LitCharts A+
Chapter 6  Quotes

This creative duality ran through every aspect of Abbott during the transition era, woven into the very fabric of the corporate culture. On the one hand, Abbott recruited entrepreneurial leaders and gave them the freedom to determine the best path to achieving their objectives. On the other hand, individuals had to commit fully to the Abbott system and were held rigorously accountable for their objectives. They had freedom, but within a framework.

I realize that it’s a bizarre analogy. But in a sense, the good-to-great companies became like David Scott. Much of the answer to the question of “good to great” lies in the discipline to do whatever it takes to become the best within carefully selected arenas and then to seek continual improvement from there. It’s really just that simple. And it’s really just that difficult.

Indeed, the big point of this chapter is not about technology per se. No technology, no matter how amazing—not computers, not telecommunications, not robotics, not the Internet—can by itself ignite a shift from good to great.

Consider Kroger. How do you get a company of over 50,000 people—cashiers, baggers, shelf stockers, produce washers, and so forth—to embrace a radical new strategy that will eventually change virtually every aspect of how the company builds and runs grocery stores? The answer is that you don’t. Not in one big event or program, anyway.

Perhaps your quest to be part of building something great will not fall in your business life. But find it somewhere. If not in corporate life, then perhaps in making your church great. If not there, then perhaps a nonprofit, or a community organization, or a class you teach. Get involved in something that you care so much about that you want to make it the greatest it can possibly be, not because of what you will get, but just because it can be done. 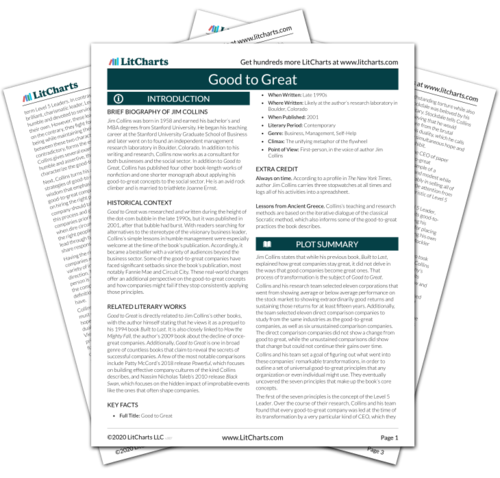 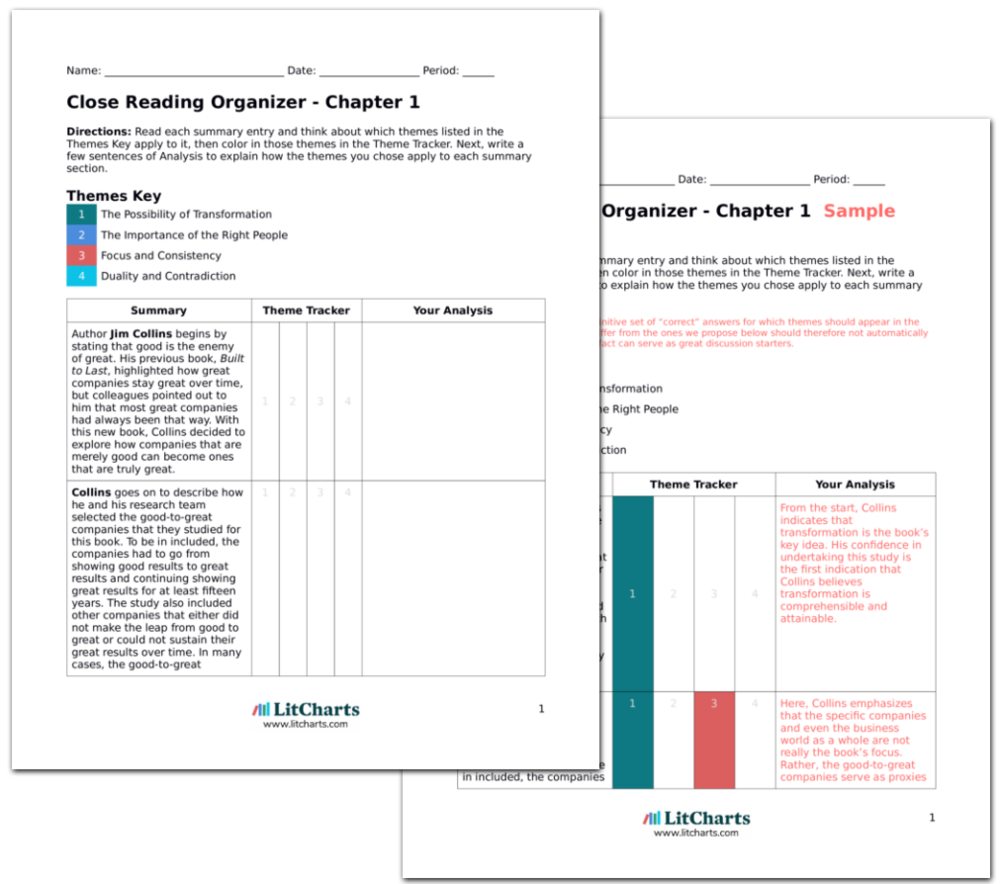