Download this LitChart! (PDF)
Teachers and parents! Struggling with distance learning? Our Teacher Edition on Haroun and the Sea of Stories can help.

Get LitCharts A+
LitCharts assigns a color and icon to each theme in Haroun and the Sea of Stories, which you can use to track the themes throughout the work.

Throughout the novel, Haroun is confronted with opposing poles and concepts that are seemingly unable to coexist. Good struggles with evil; stories and language struggle with silence; absurdity struggles with logic. However, Haroun comes to realize that it's impossible to have, for example, only silence—there must be a balance of silence and sound, and this need for balance remains a common thread throughout.

The war between Chup and Gup, as well as the conflicts in Alfibay, are wars and battles of opposites. As Haroun journeys through Alfibay and Kahani, the reader is encouraged to make comparisons between the two sides. When the battle between the Guppees and the Chupwalas concludes thanks to Haroun's wish that the moon Kahani rotate, bringing day to Chup for the first time in many years, it becomes obvious that the victory wasn't just due to one side's superiority. The victory came in finding balance, not in the triumph of one side over the other.

Opposites are explored often through the use of character foils. The most developed foil is that between Rashid Khalifa and the twin characters Mr. Sengupta and Khattam-Shud. Rashid is loud, imaginative, and at times too caught up in telling stories to pay attention to what's going on in the real world. In contrast, Mr. Sengupta and Khattam-Shud are logical and down-to-earth to a fault, and have no time for stories or imagination. Prince Bolo also acts as an opposite for Mudra, the Shadow Warrior. Prince Bolo, despite speaking conventionally, never has anything particularly useful to say, while Mudra is unable to speak conventionally. However, what Mudra does "say" through the gesture language Abhinaya is fully thought out and taken seriously. By providing examples of characters on opposite ends of a spectrum, the novel further indicates the need for a happy medium. Every character is needed to truly tell the story, and as such the novel as a whole presents the balance for which it advocates.

Several characters, including Haroun, present a more balanced array of beliefs and traits. Butt the Hoopoe, as a machine, walks a fine line between scientific rationality and more human feeling and emotion. He is rational to a fault at times, which provides humor, but he also shows great insight into the human condition and the state of the world in a very emotional and human way. Mudra as well, because of his shadow, is able to achieve a great sense of balance, which helps him to be a successful communicator and warrior. He stands in stark contrast to other Chupwalas who have lost all sense of trust in their shadows, setting them completely off balance within themselves.

The Kahani lands of Gup and Chup also act as foils for each other. Gup is warm, friendly, and talkative, while Chup is a place of ice, fear, and silence. Chup, for all its seriousness, has to rely on elements of absurdity to make life livable there. All the residents wear nose warmers that look like clown noses to keep their real noses from freezing off, alluding to the idea that the extreme censorship that Chup experiences is, to some degree, absurd. In the same vein, despite Gup's belief in stories and nonsense, and an appreciation for the unpredictability of stories, the Eggheads and the Walrus rely on complicated, inherently rational science in order to keep the moon Kahani from turning, keeping life in Gup predictable and safe. In this way, despite presenting two opposite ways of life, the novel indicates that it's impossible to be fully one way or another. This idea becomes fully crystallized when the reader learns that Khattam-Shud, despite wanting silence for all, speaks—he's unable to maintain his power to dictate silence if he himself is silent. 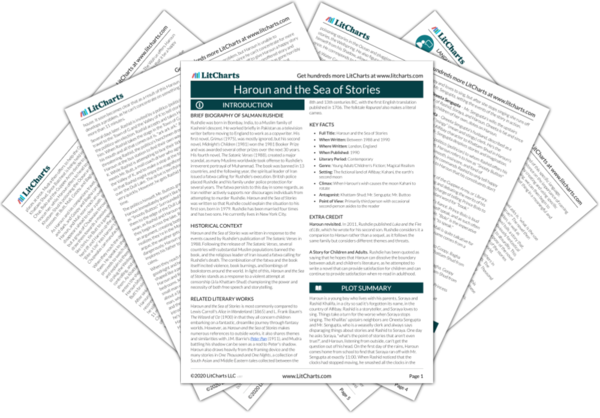 Balance and Opposites Quotes in Haroun and the Sea of Stories

Below you will find the important quotes in Haroun and the Sea of Stories related to the theme of Balance and Opposites.
Chapter 5 Quotes

"A strange sort of Story Moon our Kahani would be, if storybook things weren't everywhere to be found." And Haroun had to admit that that was a reasonable remark.

—"I don't know," panted Iff as he struggled to keep up with the charging boy. "We've never caught a spy before. Maybe we should scold him. Or make him stand in the corner. Or write I must not spy one thousand and one times. Or is that too severe?"

Haroun noted that many other Pages of the Royal Guard were dressed in half-familiar stories. One Page wore the tale of ‘Bolo and the Wonderful Lamp’; another, ‘Bolo and the Forty Thieves’. Then there was ‘Bolo the Sailor’, ‘Bolo and Juliet’, ‘Bolo in Wonderland’.

Haroun was rather shocked. "That sounds like mutinous talk to me," he suggested, and Iff, Goopy, Bagha and Mali found that very interesting indeed. "What's a Mutinous?" asked Iff, curiously. "Is it a plant?" Mali inquired.
"You don't understand," Haroun tried to say. "It's an Adjective."
"Nonsense," said the Water Genie. "Adjectives can't talk."
"Money talks, they say," Haroun found himself arguing (all this argument around him was proving infectious), "so why not Adjectives? Come to that, why not anything?"

"But but but what is the point of giving persons Freedom of Speech," declaimed Butt the Hoopoe, "if you then say they must not utilize the same? And is not the Power of Speech the greatest Power of all? Then surely it must be exercised to the full?"

"But it's not as simple as that," he told himself, because the dance of the Shadow Warrior showed him that silence had its own grace and beauty (just as speech could be graceless and ugly); and that Action could be as noble as Words; and that creatures of darkness could be as lovely as the children of the light. "If Guppees and Chupwalas didn't hate each other so," he thought, "they might actually find each other pretty interesting. Opposites attract, as they say."

"And of course there can be quarrels between the Shadow and the Substance or Self or Person; they can pull in opposite directions—how often have I witnessed that!-- but just as often there is a true partnership, and mutual respect. —So Peace with the Chupwalas means Peace with their Shadows, too."

"All my life I've heard about the wonderful Sea of Stories, and Water Genies, and everything; but I started believing only when I saw Iff in my bathroom the other night. And now that I've actually come to Kahani and seen with my own eyes how beautiful the Ocean is, with its Story Streams in colours whose names I don't even know, and its Floating Gardeners and Plentimaw Fishes and all, well, it turns out I may be too late, because the whole Ocean's going to be dead any minute if we don't do something. And it turns out that I don't like the idea of that, sir, not one bit. I don't like the idea that all the good stories in the world will go wrong for ever and ever, or just die. As I say, I only just started believing in the Ocean, but maybe it isn't too late for me to do my bit."

"Never thought it'd be so bad!"
"We have failed you! We feel sad!"
"I feel terrible! She feels worse!"
"We can hardly speak in verse."

"But this is all too fanciful for words," he told himself. "A boat made out of shadows? A shadow-ship? Don't be nuts." But the idea kept nagging at him, and wouldn't let go. Look at the edges of everything here, said a voice in his head. The edges of the poison tanks, the crane, the ship itself. Don't they look, well, fuzzy? That's what shadows are like; even when they're sharp, they're never as sharp-edged as real, substantial things.

And as for the rest, well, their vows of silence and their habits of secrecy had made them suspicious and distrustful of one another. 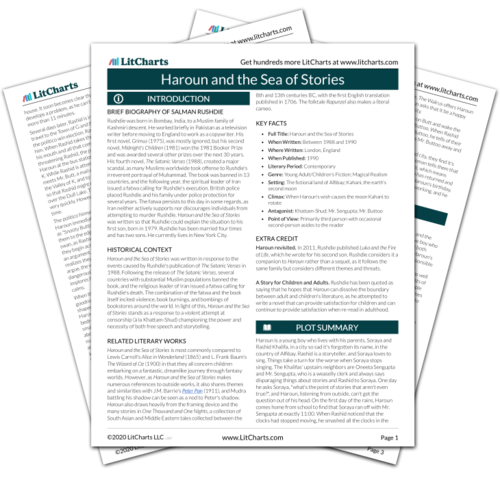 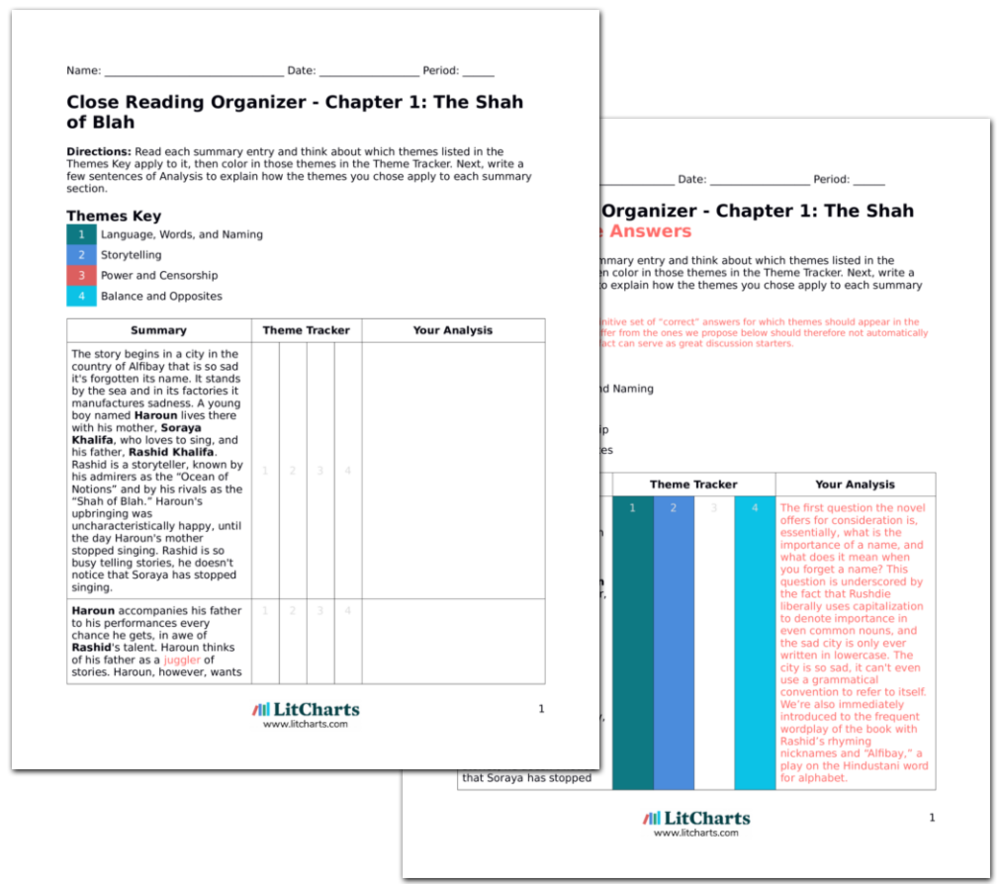