Download this LitChart! (PDF)
Teachers and parents! Struggling with distance learning? Our Teacher Edition on Home Fire can help.

Welcome to the LitCharts study guide on Kamila Shamsie's Home Fire. Created by the original team behind SparkNotes, LitCharts are the world's best literature guides.

A concise biography of Kamila Shamsie plus historical and literary context for Home Fire.

A quick-reference summary: Home Fire on a single page.

In-depth summary and analysis of every chapter of Home Fire. Visual theme-tracking, too.

Explanations of Home Fire's symbols, and tracking of where they appear.

An interactive data visualization of Home Fire's plot and themes.

Kamila Shamsie was born in 1973 in Pakistan, the daughter of journalist and editor Muneeza Shamsie. Shamsie was brought up in Karachi before attending Hamilton College in New York, and then she received an MFA from the University of Massachusetts, Amherst. Shamsie wrote her first novel, In the City by the Sea, while she was still in college, and it was published when she was 25 years old. Between 2000 and 2014, Shamsie wrote five additional novels. Her novels have won the Patras Bokhari Award, a prestigious literary award in Pakistan. Home Fire, her seventh novel, won the 2018 Women’s Prize for Fiction. Shamsie moved to London in 2007 and is a dual citizen of the UK and Pakistan.
Get the entire Home Fire LitChart as a printable PDF.
"My students can't get enough of your charts and their results have gone through the roof." -Graham S.
Download 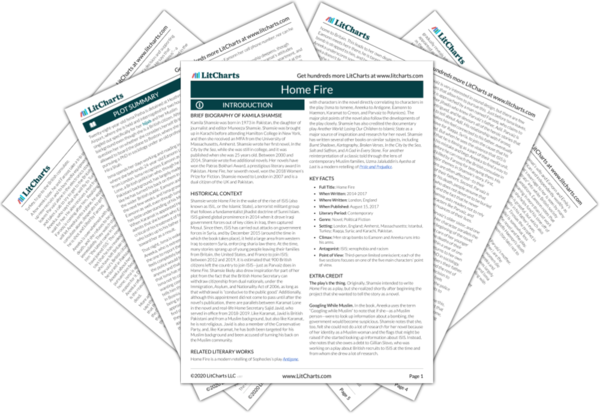 Shamsie wrote Home Fire in the wake of the rise of ISIS (also known as ISIL, or the Islamic State), a terrorist militant group that follows a fundamentalist jihadist doctrine of Sunni Islam. ISIS gained global prominence in 2014 when it drove Iraqi government forces out of key cities in Iraq, then captured Mosul. Since then, ISIS has carried out attacks on government forces in Syria, and by December 2015 (around the time in which the book takes place), it held a large area from western Iraq to eastern Syria, enforcing sharia law there. At the time, many stories sprang up of young people leaving their families from Britain, the United States, and France to join ISIS; between 2012 and 2019, it is estimated that 900 British citizens left the country to join ISIS—just as Parvaiz does in Home Fire. Shamsie likely also drew inspiration for part of her plot from the fact that the British Home Secretary can withdraw citizenship from dual nationals, under the Immigration, Asylum, and Nationality Act of 2006, as long as that withdrawal is “conducive to the public good.” Additionally, although this appointment did not come to pass until after the novel’s publication, there are parallels between Karamat Lone in the novel and real-life Home Secretary Sajid Javid, who served in office from 2018-2019. Like Karamat, Javid is British Pakistani and from a Muslim background, but also like Karamat, he is not religious. Javid is also a member of the Conservative Party, and, like Karamat, he has both been targeted for his Muslim background and been accused of turning his back on the Muslim community.

Other Books Related to Home Fire

Home Fire is a modern retelling of Sophocles’s play Antigone, with characters in the novel directly correlating to characters in the play (Isma to Ismene, Aneeka to Antigone, Eamonn to Haemon, Karamat to Creon, and Parvaiz to Polynices). The major plot points of the novel also follow the developments of the play closely. Shamsie has also credited the documentary play Another World: Losing Our Children to Islamic State as a major source of inspiration and research for her novel. Shamsie has written several other books on similar subjects, including Burnt Shadows, Kartography, Broken Verses, In the City by the Sea, Salt and Saffron, and A God in Every Stone. For another reinterpretation of a classic told through the lens of contemporary Muslim families, Uzma Jalaluddin’s Ayesha at Last is a modern retelling of Pride and Prejudice.
Key Facts about Home Fire

The play’s the thing. Originally, Shamsie intended to write Home Fire as a play, but she realized shortly after beginning the project that she wanted to tell the story as a novel.

Googling While Muslim. In the book, Aneeka uses the term “Googling while Muslim” to note that if she—as a Muslim person—were to look up information about a bombing, the government would become suspicious. Shamsie notes that she, too, felt she could not do a lot of research for her novel because of her identity as a Muslim woman and the flags that might be raised if she started looking up information about ISIS. Instead, she notes that she owes a debt to Gillian Slovo, who was working on a play about British recruits to ISIS at the time and from whom she drew a lot of research. 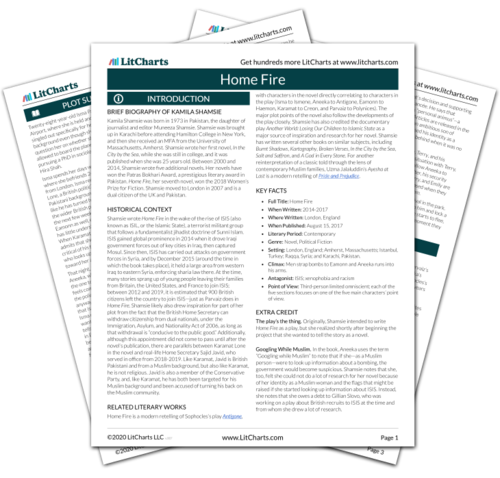 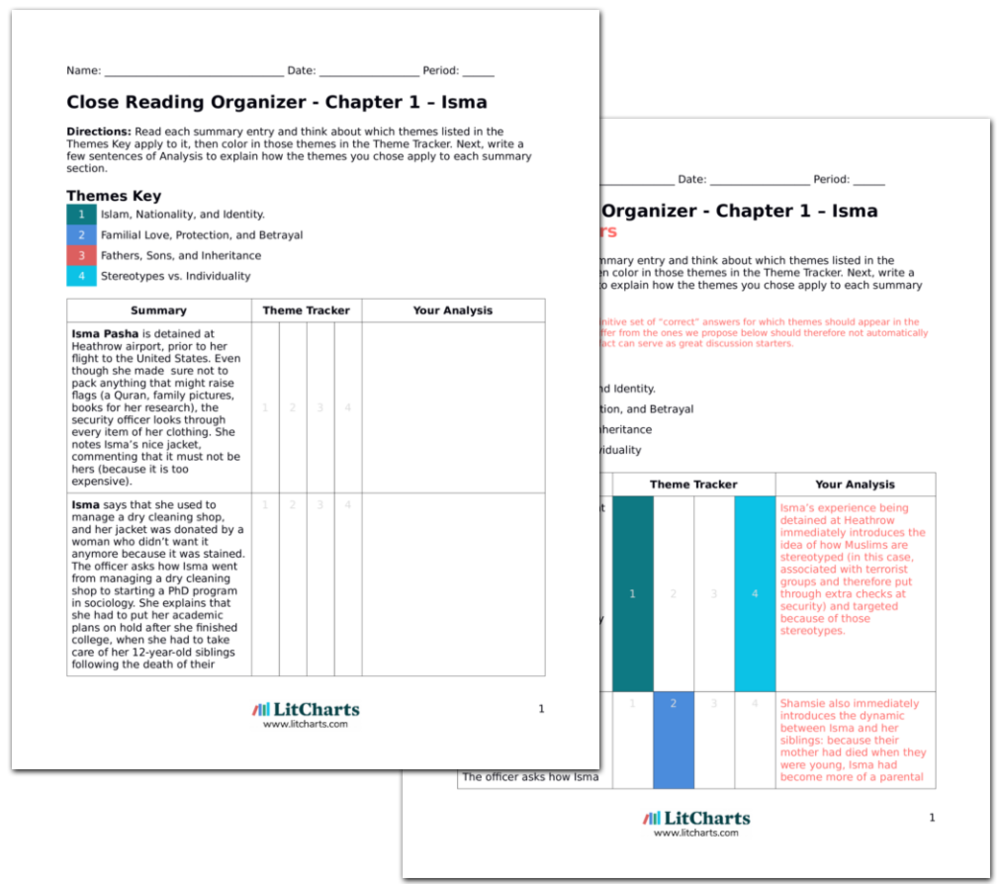