How I Learned to Drive tells the story of Li’l Bit, now a woman of around thirty-five years, coming to terms with the abusive and emotionally complex relationship that she had with her Uncle Peck. The play works in a non-linear way, using flashbacks, monologues and a heightened sense of the surreal to show how Li’l Bit relates to her memory and trauma. Other than the two characters already mentioned, the play employs three “Greek choruses”—teenage, female, and male—to jump between the roles of a wide range of people that populate Li’l Bit’s recollections. An official-sounding voice marks the transition between the scenes, using the kind of headings found in driving instruction.

The play opens with the present-day Li’l Bit setting the scene. Explaining that “sometimes to tell a secret, you first have to teach a lesson,” she introduces the first flashback, which takes place in 1969 when she is seventeen. She and Peck are in Peck’s car on a dark lane in Maryland. Peck touches and kisses Li’l Bit’s breasts, though she is reluctant and especially aware that she has an important day at school the following day. He does so as a “reward’ for being a “good boy”—based on the fact that he hasn’t drunk any alcohol for a week.

This scene breaks to show a typical family dinner in Li’l Bit’s household. Her grandfather, played by the male chorus, makes lewd jokes about the size of her breasts. Li’l Bit is determined to get a good education, which the male chorus says she isn’t going to need. As Li’l Bit storms outside, Peck comes out to comfort her. Present-day L’il Bit then reveals that she flunked out of school because she was drinking too much and spent the rest of that time period driving through the night.

The next flashback takes place in a fancy restaurant in 1968. Peck is treating Li’l Bit for passing her driving test first time. He orders her oysters and martinis, the latter of which she knocks back one after another despite being underage. The waiter looks on disapprovingly, but Peck pays him off with a big tip. Li’l Bit tries to get Peck to open up about his World War II experiences, but he resists. During this scene, the female chorus delivers a monologue as Li’l Bit’s mother, offering absurd advice on how women ought to consume alcohol. Li’l Bit drunkenly kisses Peck in the car afterwards, before freaking out about the inappropriateness of their relationship.

Next, the teenage chorus introduces a scene in which Peck takes Li’l Bit’s young cousin, BB (standing for “blue balls”; the entire family is nicknamed after their genitalia), fishing. In this, it is strongly implied that Peck sexually abuses his young relative.

Li’l Bit intervenes to describe a typical conversation between her fourteen-year-old self, her mother, and her grandmother (the last two played by the female and teenage choruses respectively). The grandmother describes her husband’s sexual behavior as that of a “bull,” wanting to have sex every morning and evening.

Li’l Bit then introduces another brief memory, in which, aged twenty-seven, she has a brief sexual encounter with a man who is ten years her junior. She lies in bed after having sex, wondering if she now understands something of the “allure” that Peck felt for her in her youth.

The story then returns to the previous conversation between Li’l Bit, her mother, and grandmother. Li’l Bit is a year older and asks whether sex hurts. Her mother wants to give her an honest account of the “facts of life,” but her god-fearing grandmother strongly disagrees. The mother and grandmother have an argument in which it is revealed that the mother is resentful for her grandmother’s unwillingness to provide guidance about sex to her when she was younger. The mother fell pregnant at an early age and had a bad relationship with the Li’l Bit’s father.

The action switches to a driving lesson given to Li’l Bit by Peck. He gives her good, solid advice on how to drive, though also insists that she needs to drive “like a man,” because women are too fatally hesitant. With her hands on the steering wheel, Li’l Bit quips that she won’t be able to “defend” herself; Peck vows never to touch her while she’s driving.

The audience is then given a sense of Li’l Bit’s time at high school. Her classmates make jokes on account of her big breasts. These, too, cause Li’l Bit confusion: she likens her breasts to hostile “alien life forces” and radio transmitters, sending out siren-like signals to men in order to attract them to “dash” themselves on “these rocks.” At the school dance, Li’l Bit refuses to join in any of the fast numbers, afraid that the boys just want to see her “jiggling.”

The official-sounding voice announces: “You and the Reverse Gear.” This takes the action back to 1965, in which a thirteen-year-old Li’l Bit is being photographed by Peck in his basement. He puts on the kind of music that she likes and gets her to dance for the camera. When he promises not to “cross the line,” she naively states the line to be “frontal nudity.” He accidentally lets slip that he intends to build a portfolio to one day send to Playboy. Li’l Bit is hurt by this, again emphasizing that she wants to get a good education. To placate her, Peck tells Li’l Bit that he loves her.

At this point, the female chorus jumps in as Aunt Mary, Peck’s wife. She praises the virtues of her husband: how he does the chores round the house, helps out the neighbors, works overtime to buy her jewelry etc. She knows “what’s going on” but blames it on Li’l Bit for being “sly.”

The next scene presents the beginning of Li’l Bit and Peck’s relationship. It is Christmas in 1964. A moody Peck is doing the dishes in the kitchen, conversing with Li’l Bit. She is impressed with his willingness to do the chores, which he says is what women deserve from men. They touch on his drinking problem; Li’l Bit strikes a deal with Peck, saying they can meet up once a week if he avoids alcohol—as long as, when they do, he doesn’t “cross the line.” Peck is visibly moved and enthusiastically accepts.

Flash forward to 1969, towards the end of the relationship. Li’l Bit is at college, away from the family home. Every day brings another gift and note from Peck, which seem to be counting down to her eighteenth birthday (when it becomes legal for them to have sex). Soon after, they are in a fancy hotel room. Li’l Bit chastises Peck for sending the gifts, likening it to the behavior of a “serial killer.” She explains that she’s not be doing well in her education and is “confused.” Li’l Bit gulps down the champagne that Peck has bought for her and makes him drink some too. After some awkward small talk, they both have something important to say. Li’l Bit has come because she wants to tell Peck that she doesn’t want to see him anymore. Increasingly desperate, Peck asks that she lie down with him on the bed and that they just “hold one another.” Li’l Bit, “half wanting to run, half wanting to get it over with, half wanting to be held by him,” agrees to his suggestion. As they lie there, Li’l Bit feels conflicted and almost kisses Peck, drawing back at the last moment. Peck, in a frantic rush, pulls a ring out of his pocket and proposes to Li’l Bit. She cries out “this isn’t happening” before making a swift exit. Soon after she leaves, the male chorus plays the role of bartender as Peck knocks back shot after shot of liquor.

Present-day Li’l Bit explains to the audience that this was the last she ever saw her Uncle Peck. It took him seven years to drink himself to death, she says, losing his job, wife, and driving license along the way. One day he fell down his basement stairs and died. Now that she’s old enough, says Lil Bit, she wishes she could ask him: “who did it to you, Uncle Peck? How old were you? Were you eleven?” She imagines his spirit as a “kind of Flying Dutchman,” driving the Carolina backroads “looking for a young girl who, of her own free will, will love him. Release him.”

The play then shows a brief exchange between Li’l Bit in the Summer of 1962, in which she convinces her mother/the female chorus to let her go and stay with Uncle Peck. Her mother is resistant to the idea, not trusting Peck’s motives, but Li’l Bit insists she can handle him. Her mother relents but tells her that if anything does happen it will be Li’l Bit’s fault.

The audience then witnesses Peck’s first abuse of Li’l Bit. The teenage chorus member speaks Li’l Bit’s lines, though the actions remain Li’l Bit’s. Peck is driving but offers Li’l Bit a try. Excited and nervous, she takes up the driver’s seat but can’t reach the pedals. Peck suggests she sits on her lap and just steers. As she does so, he rubs her breasts and brings himself to orgasm; Li’l Bit is horrified, shouting (via the teenage chorus) “this isn’t happening.”

Li’l Bit then gets out of the car, restored to the present. She describes that moment as the “last day I lived in my body.” Now almost thirty-five, she is glad to believe in things that her younger self didn’t, “like family and forgiveness.” She still doesn’t do anything that “jiggles”; the closest thing she feels to “flight in the body” is to drive. She gets in the car and tunes the radio, which initially plays back some of the lines from earlier on in the play, such as her grandfather saying, “how is Shakespeare gonna help her lie on her back.” Settling on the music that she loves—something like Roy Orbison—she checks the back mirror. The spirit of Peck seems to be sitting in the back. She smiles at him, and floors it. 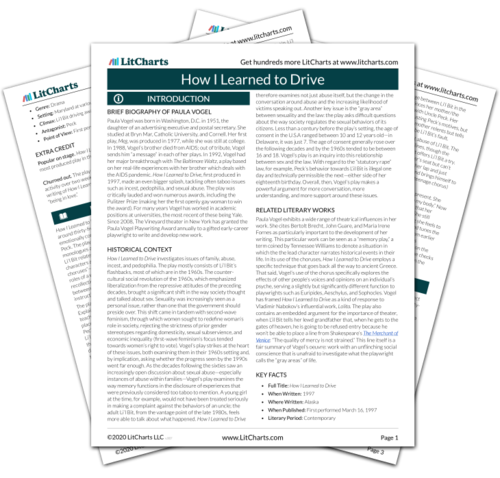 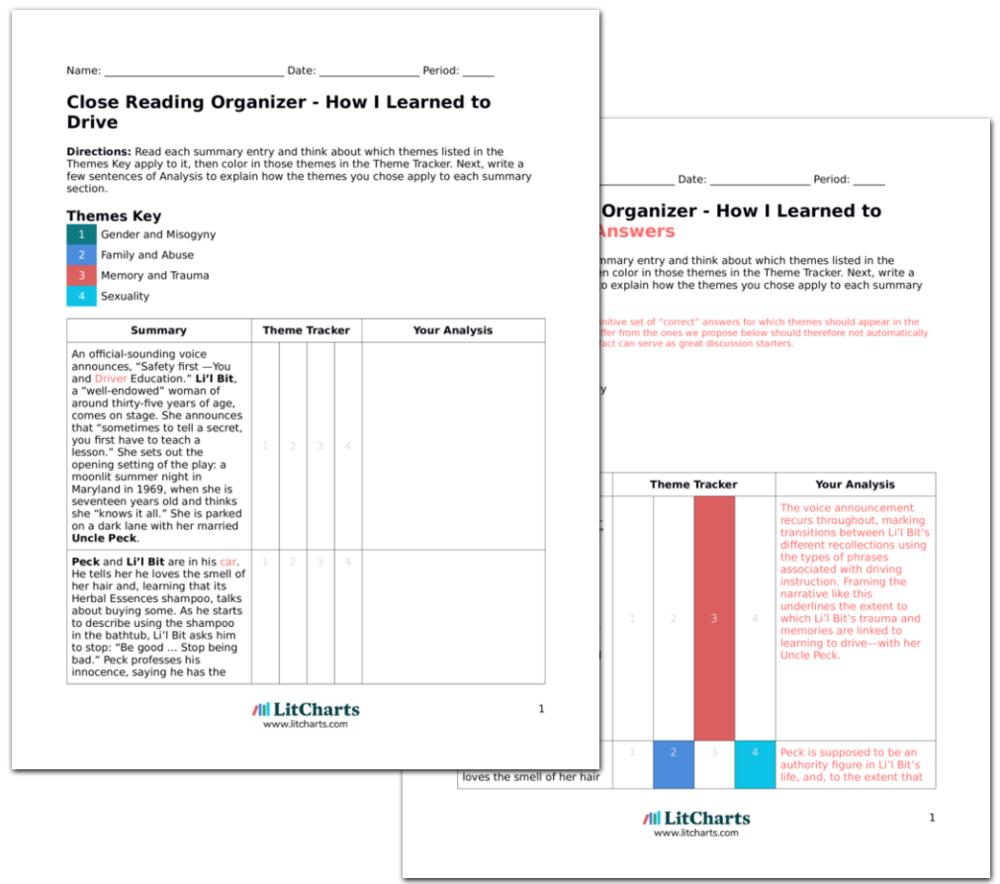