Download this LitChart! (PDF)
Teachers and parents! Struggling with distance learning? Our Teacher Edition on I, Robot can help.

Welcome to the LitCharts study guide on Isaac Asimov's I, Robot. Created by the original team behind SparkNotes, LitCharts are the world's best literature guides.

A concise biography of Isaac Asimov plus historical and literary context for I, Robot.

A quick-reference summary: I, Robot on a single page.

In-depth summary and analysis of every chapter of I, Robot. Visual theme-tracking, too.

Explanations, analysis, and visualizations of I, Robot's themes.

I, Robot's important quotes, sortable by theme, character, or chapter.

Description, analysis, and timelines for I, Robot's characters.

Explanations of I, Robot's symbols, and tracking of where they appear.

An interactive data visualization of I, Robot's plot and themes.

Asimov was born in Petrovichi, Russia, to Jewish parents and moved to the United States in 1923 when he  was  three years old. He grew up in Brooklyn before attending a branch of Columbia University specifically for Jewish and Italian-American students. He studied chemistry and eventually went on to complete an M.A. and PhD in chemistry. He met and married his wife, Gertrude, in 1942 and had two children with her, born in 1951 and 1955. He was drafted into the army in 1945 and served for nine months. He then joined the faculty of Boston University School of Medicine in 1949. He continued to lecture there until October 1979, when he was  promoted to a full professor of biochemistry. While there, he began writing short stories and novels about popular science, including the short stories that were compiled into I, Robot. During the late 1950s and ‘60s, Asimov began writing nonfiction on scientific topics, and wrote a regular nonfiction column in Venture Science Fiction Magazine and later wrote for The Magazine of Fantasy & Science Fiction. Later, Asimov also wrote several popular history books, including a guide to the Bible. In 1977, Asimov suffered a heart attack, and in December 1983 he had triple bypass surgery and contracted HIV from a blood transfusion. He died in 1992 due to complications from AIDS.
Get the entire I, Robot LitChart as a printable PDF.
"My students can't get enough of your charts and their results have gone through the roof." -Graham S.
Download 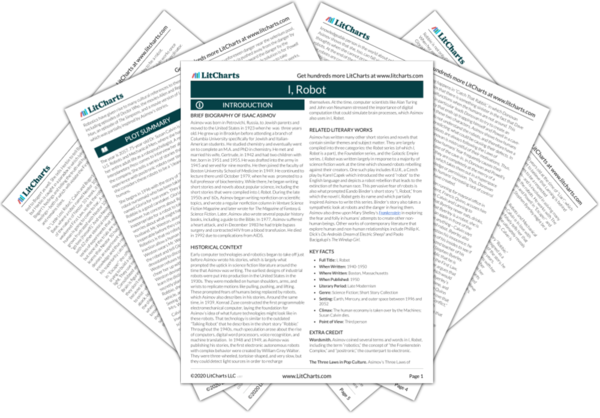 Historical Context of I, Robot

Early computer technologies and robotics began to take off just before Asimov wrote his stories, which is largely what prompted the uptick in science fiction literature around the time that Asimov was writing. The earliest designs of industrial robots were put into production in the United States in the 1930s. They were modelled on human shoulders, arms, and wrists to replicate motions like pulling, pushing, and lifting. These prompted fears of humans being replaced by robots, which Asimov also describes in his stories. Around the same time, in 1939, Konrad Zuse constructed the first programmable electromechanical computer, laying the foundation for Asimov’s idea of what future technologies might look like in these robots. That technology is similar to the outdated “Talking Robot” that he describes in the short story “Robbie.” Throughout the 1940s, much speculation arose about the rise of computers, digital word processors, voice recognition, and machine translation.  In 1948 and 1949, as Asimov was publishing his stories, the first electronic autonomous robots with complex behavior were created by William Grey Walter. They were three-wheeled, tortoise-shaped, and very slow, but they could detect light sources in order to recharge themselves. At the time, computer scientists like Alan Turing and John von Neumann stressed the importance of digital computation that could simulate brain processes, which Asimov also uses in I, Robot.

Other Books Related to I, Robot

Asimov has written many other short stories and novels that contain similar themes and subject matter. They are largely compiled into three categories: the Robot series (of which I, Robot is a part), the Foundation series, and the Galactic Empire series. I, Robot was written largely in response to a majority of science fiction work at the time which showed robots rebelling against their creators. One such play includes R.U.R., a Czech play by Karel Capek which introduced the word “robot” to the English language and depicts a robot rebellion that leads to the extinction of the human race. This pervasive fear of robots is also what prompted Eando Binder’s short story “I, Robot,” from which the novel I, Robot gets its name and which partially inspired Asimov to write this series. Binder’s story also takes a sympathetic look at robots and the danger in fearing them. Asimov also drew upon Mary Shelley’s Frankenstein in exploring the fear and folly in humans’ attempts to create other non-human beings. Other works of contemporary literature that explore human and non-human relationships include Phillip K. Dick’s Do Androids Dream of Electric Sheep? and Paolo Bacigalupi’s The Windup Girl.
Key Facts about I, Robot

Extra Credit for I, Robot

Wordsmith. Asimov coined several terms and words in I, Robot, including the term “robotics,” the concept of “the Frankenstein Complex,” and “positronic,” the counterpart to electronic.

The Three Laws in Pop Culture. Asimov’s Three Laws of Robotics have given rise to many cultural references to them, including episodes of Doctor Who, the movies Alien and Repo Man, an episode of The Simpsons, and a movie version of I, Robot which was partially inspired by Asimov’s stories. 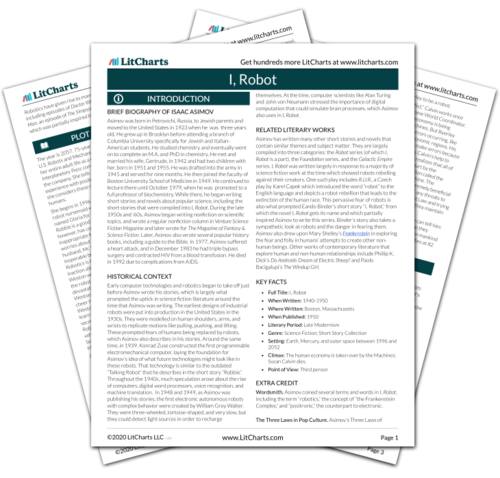 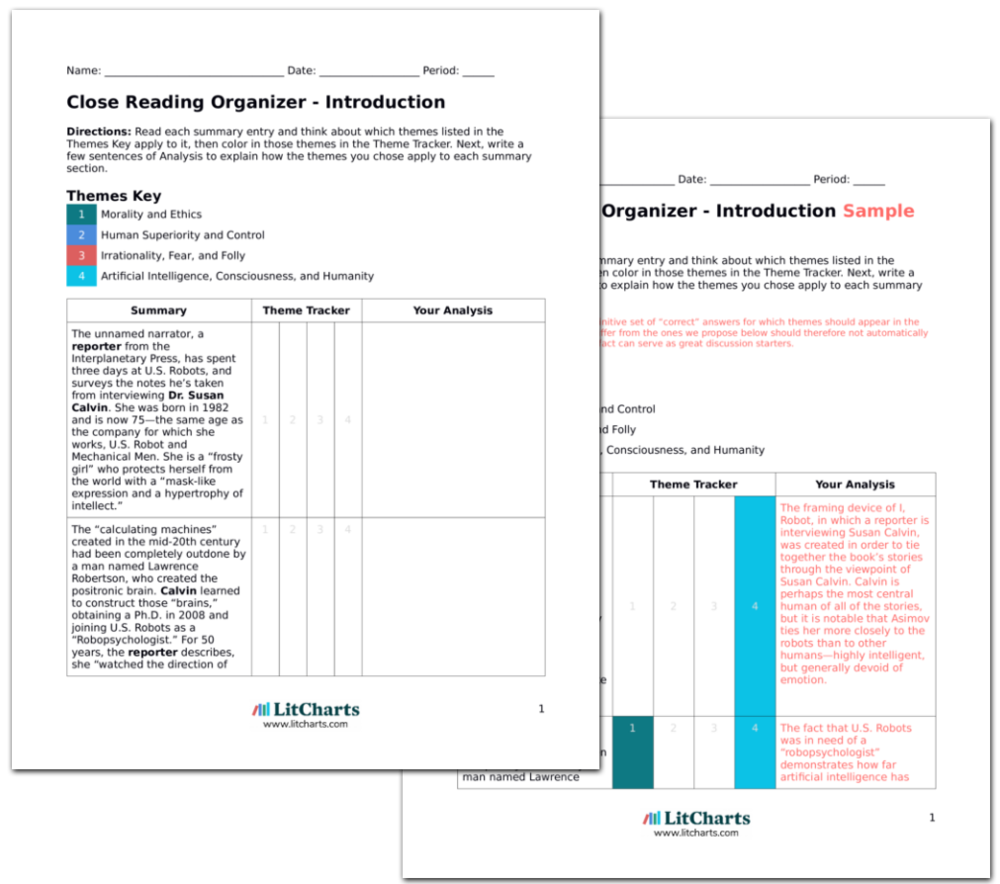