Download this LitChart! (PDF)
Teachers and parents! Struggling with distance learning? Our Teacher Edition on Life is a Dream can help.

Welcome to the LitCharts study guide on Pedro Calderón de la Barca's Life is a Dream. Created by the original team behind SparkNotes, LitCharts are the world's best literature guides.

Life is a Dream: Introduction

A concise biography of Pedro Calderón de la Barca plus historical and literary context for Life is a Dream.

Life is a Dream: Plot Summary

A quick-reference summary: Life is a Dream on a single page.

In-depth summary and analysis of every act of Life is a Dream. Visual theme-tracking, too.

Life is a Dream: Themes

Explanations, analysis, and visualizations of Life is a Dream's themes.

Life is a Dream: Quotes

Life is a Dream's important quotes, sortable by theme, character, or act.

Life is a Dream: Characters

Description, analysis, and timelines for Life is a Dream's characters.

Life is a Dream: Symbols

Explanations of Life is a Dream's symbols, and tracking of where they appear.

Life is a Dream: Theme Wheel

An interactive data visualization of Life is a Dream's plot and themes.

Calderón was born into an upper-middle class family in Madrid, Spain, in 1600. His mother died when he was just 10 years old, and his father, a member of the Spanish nobility and secretary to the treasury, died when Calderón was 15. Calderón studied at the Jesuit College in Madrid, and he later studied law at Salamanca, a university west of Madrid. From 1625 to 1635, Calderón served in Italy with the Spanish army, and in 1636, he was made a knight in the Order of Santiago—a religious and military order—by Philip IV, King of Spain and Portugal. Calderón fathered a son, Pedro José, during the late 1640s, but the boy’s mother died not long after giving birth. Calderón then entrusted his brother with the infant’s care before joining the priesthood. Throughout the course of his life, Calderón was a prolific writer, and he is generally accepted as one of the foremost playwrights of the Spanish Golden Age, a period of increased artistic expression that coincided with Spain’s emergence as a European power. Calderón began writing poetry, and he won several contests in the city of Madrid. He then moved on to playwriting, and by the time he was in his 40s, Calderón had penned over 70 plays, including Life is a Dream, The Phantom Lady, and The Mayor of Zalamea. He wrote both religious and secular plays, and even wrote an opera, Celos aun del aire matan (translation: Jealousy, even groundless, still kills) in 1660. Calderón is known most for his complex plots, rich characters, and poetic imagery. He was a staunch observer of the Christian faith, and his plays often promote moral integrity and instruction. Claderón wrote his last play in 1680 before dying just a year later at the age of 81.
Get the entire Life is a Dream LitChart as a printable PDF.
"My students can't get enough of your charts and their results have gone through the roof." -Graham S.
Download 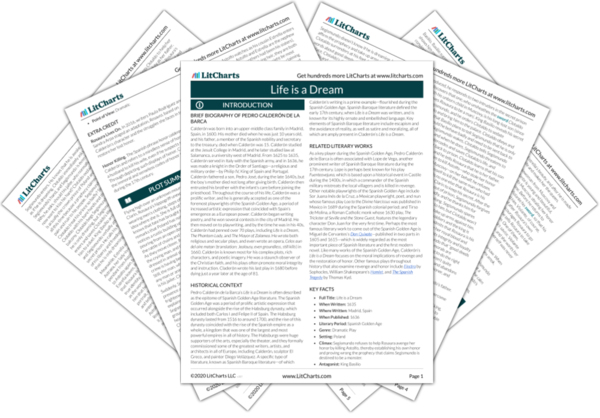 Historical Context of Life is a Dream

Pedro Calderón de la Barca’s Life is a Dream is often described as the epitome of Spanish Golden Age literature. The Spanish Golden Age was a period of prolific artistic expression that occurred alongside the rise of the Habsburg dynasty, which included both Carlos I and Felipe II of Spain. The Habsburg dynasty lasted from 1516 to around 1700, and the rise of this dynasty coincided with the rise of the Spanish empire as a whole, a kingdom that was one of the largest and most powerful empires in all of history. The Habsburgs were huge supporters of the arts, especially the theater, and they formally commissioned some of the greatest writers, artists, and architects in all of Europe, including Calderón, sculptor El Greco, and painter Diego Velázquez. A specific type of literature, known as Spanish Baroque literature—of which Calderón’s writing is a prime example—flourished during the Spanish Golden Age. Spanish Baroque literature defined the early 17th century, when Life is a Dream was written, and is known for its highly ornate and embellished language. Key elements of Spanish Baroque literature include escapism and the avoidance of reality, as well as satire and moralizing, all of which are amply present in Claderón’s Life is a Dream.

Other Books Related to Life is a Dream

As a key player during the Spanish Golden Age, Pedro Calderón de le Barca is often associated with Lope de Vega, another prominent writer of Spanish Baroque literature during the 17th century. Lope is perhaps best known for his play Fuenteovejuna, which is based upon a historical event in Castile during the 1400s, in which a commander of the Spanish military mistreats the local villagers and is killed in revenge. Other notable playwrights of the Spanish Golden Age include Sor Juana Inés de la Cruz, a Mexican playwright, poet, and nun whose famous play Loa to the Divine Narcissus was published in Mexico in 1689 during the Spanish colonial period; and Tirso de Molina, a Roman Catholic monk whose 1630 play, The Trickster of Seville and the Stone Guest, features the legendary character Don Juan for the very first time. Perhaps the most famous literary work to come out of the Spanish Golden Age is Miguel de Cervantes’s Don Quixote—published in two parts in 1605 and 1615—which is widely regarded as the most important piece of Spanish literature and the first modern novel. Like many works of the Spanish Golden Age, Calderón’s Life is a Dream focuses on the moral implications of revenge and the restoration of honor. Other famous plays throughout history that also examine revenge and honor include Electra by Sophocles, William Shakespeare’s Hamlet, and The Spanish Tragedy by Thomas Kyd.
Key Facts about Life is a Dream

Extra Credit for Life is a Dream

Rosaura Lives On. In 2016, writers Paula Rodriguez and Sandra Arpa staged an adaptation, Rosaura, based on Calderón’s character and the struggles she faces in trying to restore her lost honor.

Honor Killing. The Spanish phrase honor calderonian began with Calderón and refers to a mindless sense of honor that can force a husband to kill his wife, even if he suspects she is innocent. Through depicting such displays of honor, Calderón condemns the immoral and senseless codes of honor that were popular during the 17th century.