Download this LitChart! (PDF)
Teachers and parents! Struggling with distance learning? Our Teacher Edition on Nineteen Minutes can help.

Welcome to the LitCharts study guide on Jodi Picoult's Nineteen Minutes. Created by the original team behind SparkNotes, LitCharts are the world's best literature guides.

A concise biography of Jodi Picoult plus historical and literary context for Nineteen Minutes.

A quick-reference summary: Nineteen Minutes on a single page.

In-depth summary and analysis of every chapter of Nineteen Minutes. Visual theme-tracking, too.

Explanations of Nineteen Minutes's symbols, and tracking of where they appear.

An interactive data visualization of Nineteen Minutes's plot and themes.

Jodi Picoult was born to a secular Jewish family on Long Island. She wrote her first story at the age of five, and graduated with a BA from Princeton in 1987, where she studied creative writing. She went on to earn a master’s degree in education from Harvard. She published her first novel, Songs of the Humpback Whale, in 1992, and since then has gone on to publish two dozen more. Her novels are often inspired by current events, especially timely social problems facing American society, including racism, euthanasia, and the death penalty. Nineteen Minutes was the first of her books to debut at the top of the New York Times bestseller’s list. She is married and has three children; she says that Nineteen Minutes was partially inspired by witnessing the problem of bullying via her children. She lives in Hanover, New Hampshire.
Get the entire Nineteen Minutes LitChart as a printable PDF.
"My students can't get enough of your charts and their results have gone through the roof." -Graham S.
Download 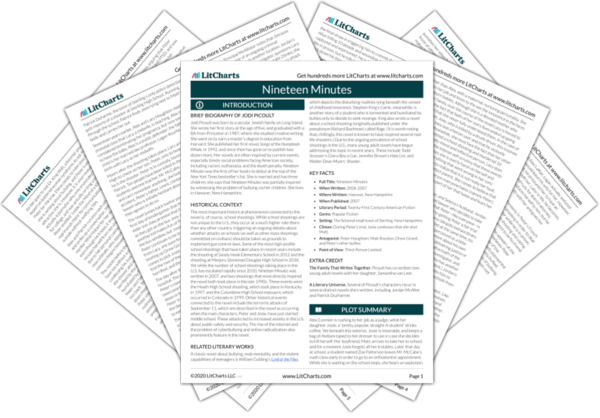 The most important historical phenomenon connected to the novel is, of course, school shootings. While school shootings are not unique to the U.S., they occur at a much higher rate there than any other country, triggering an ongoing debate about whether attacks on schools (as well as other mass shootings committed on civilians) should be taken as grounds to implement gun control laws. Some of the most high-profile school shootings that have taken place in recent years include the shooting at Sandy Hook Elementary School in 2012 and the shooting at Marjory Stoneman Douglas High School in 2018. Yet while the number of school shootings taking place in the U.S. has escalated rapidly since 2010, Nineteen Minutes was written in 2007, and two shootings that most directly inspired the novel both took place in the late 1990s. These events were the Heath High School shooting, which took place in Kentucky in 1997, and the Columbine High School massacre, which occurred in Colorado in 1999. Other historical events connected to the novel include the terrorist attacks of September 11, which are described in the novel as occurring when the main characters, Peter and Josie, have just started middle school. These attacks led to increased anxiety in the U.S. about public safety and security. The rise of the internet and the problem of cyberbullying and online radicalization also prominently feature in the novel.

Other Books Related to Nineteen Minutes

A classic novel about bullying, mob mentality, and the violent capabilities of teenagers is William Golding’s Lord of the Flies, which depicts the disturbing realities lying beneath the veneer of childhood innocence. Stephen King’s Carrie, meanwhile, is another story of a student who is tormented and humiliated by bullies only to decide to seek revenge. King also wrote a novel about a school shooting (originally published under the pseudonym Richard Bachman) called Rage. (It is worth noting that, chillingly, this novel is known to have inspired several real-life shooters.) Due to the ongoing prevalence of school shootings in the U.S., many young adult novels have begun addressing this topic in recent years. These include Todd Strasser’s Give a Boy a Gun, Jennifer Brown’s Hate List, and Walter Dean Myers’ Shooter.
Key Facts about Nineteen Minutes

The Family That Writes Together. Picoult has co-written two young adult novels with her daughter, Samantha van Leer. 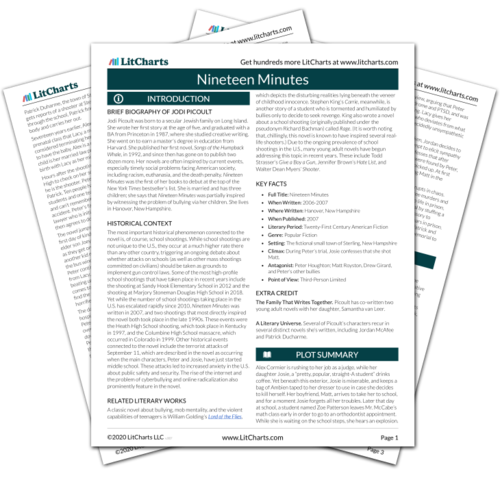 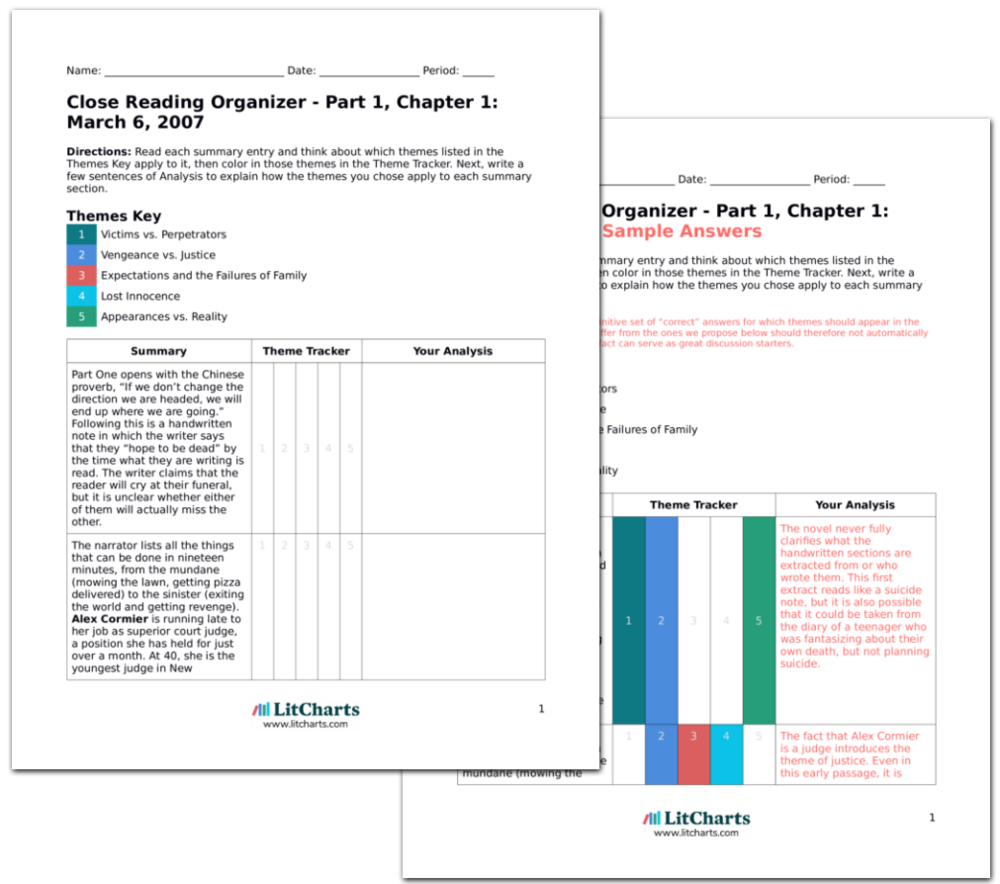