Welcome to the LitCharts study guide on Vladimir Nabokov's Pale Fire. Created by the original team behind SparkNotes, LitCharts are the world's best literature guides.

A concise biography of Vladimir Nabokov plus historical and literary context for Pale Fire.

A quick-reference summary: Pale Fire on a single page.

In-depth summary and analysis of every section of Pale Fire. Visual theme-tracking, too.

Explanations of Pale Fire's symbols, and tracking of where they appear.

An interactive data visualization of Pale Fire's plot and themes.

Vladimir Nabokov was born the first of five children in a wealthy family of Russian nobility. Nabokov’s father, Vladimir Dmitrievich Nabokov, was a lawyer and journalist, and his mother, Yelena Ivanovna Rukavishnikova, was the heiress of a successful gold mine. Nabokov enjoyed a privileged childhood on his family’s Saint Petersburg estate, and he developed an early love for literature and writing. Nabokov published his first book of poems, Stikhi (“Poems”), in 1916 when he was just 17 years old. His father was a prominent leader of Russia’s Constitutional Democratic Party, and when the Russian Revolution broke out in 1917, Nabokov and his family were forced to leave Russia for Crimea. No one expected the revolution to last long, and the family assumed that they would return to Russia; however, by 1919, the entire Nabokov family was exiled in Europe. Nabokov went to England, where he enrolled at Trinity College, University of Cambridge, to study zoology and language. Nabokov was a gifted student, consistently testing at the top of his class, and he earned a BA in 1922. After college, he moved to Berlin, where the rest of his family was exiled. Nabokov stayed in Berlin for several years and became a popular poet. In 1925, he married Véra Evseyevna Slonim and their only child, Dmitri, was born in 1934. In 1937, Nabokov and his young family moved to France, but they then relocated to the United States in 1940 due to World War II. The Nabokovs initially arrived in New York City, but Nabokov accepted a teaching position at Wellesley College in Massachusetts in 1941. Nabokov published his first English novel, The Real Life of Sebastian Knight, that same year and later became a United States citizen in 1945. As a lepidopterist (an expert on moths and butterflies), Nabokov was the curator of lepidoptery at Harvard University’s Museum of Comparative Zoology. He also taught Russian and European literature at Cornell University in New York from 1948 to 1959, where he had several prominent students, including future Supreme Court Justice Ruth Bader Ginsburg and writer Thomas Pynchon. The success and financial security that followed the 1955 publication of Lolita allowed Nabokov to step away from teaching, and in 1961, he relocated to Montreux, Switzerland, and began writing full time. Nabokov wrote several novels, nonfiction works, and books of poetry while in Switzerland, including Pale Fire in 1962, Speak, Memory: An Autobiography Revisited in 1967, and Carrousel, which was published posthumously in 1987. He died in 1977 at the age of 78 after a lengthy and undiagnosed illness. Nabokov is widely accepted as one of the finest writers of English prose, and many critics and scholars count both Pale Fire and Lolita among the best novels ever written.
Get the entire Pale Fire LitChart as a printable PDF.
"My students can't get enough of your charts and their results have gone through the roof." -Graham S.
Download 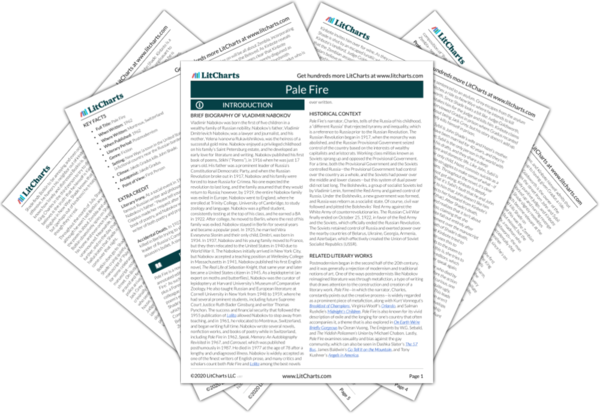 Pale Fire’s narrator, Charles, tells of the Russia of his childhood, a “different Russia” that rejected tyranny and inequality, which is a reference to Russia prior to the Russian Revolution. The Russian Revolution began in 1917, when the monarchy was abolished, and the Russian Provisional Government seized control of the country based on the interests of wealthy capitalists and aristocrats. Working class militias known as Soviets sprang up and opposed the Provisional Government. For a time, both the Provisional Government and the Soviets controlled Russia—the Provisional Government had control over the country as a whole, and the Soviets had power over the middle and lower classes—but this system of dual power did not last long. The Bolsheviks, a group of socialist Soviets led by Vladimir Lenin, formed the Red Army and gained control of Russia. Under the Bolsheviks, a new government was formed, and Russia was reborn as a socialist state. Of course, civil war followed and pitted the Bolsheviks’ Red Army against the White Army of counterrevolutionaries. The Russian Civil War finally ended on October 25, 1922, in favor of the Red Army and the Soviets, which officially ended the Russian Revolution. The Soviets retained control of Russia and exerted power over the nearby countries of Belarus, Ukraine, Georgia, Armenia, and Azerbaijan, which effectively created the Union of Soviet Socialist Republics (USSR).

Other Books Related to Pale Fire

Postmodernism began in the second half of the 20th century, and it was generally a rejection of modernism and traditional notions of art. One of the ways postmodernists like Nabokov reimagined literature was through metafiction, a type of writing that draws attention to the construction and creation of a literary work. Pale Fire—in which the narrator, Charles, constantly points out the creative process—is widely regarded as a prominent piece of metafiction, along with Kurt Vonnegut’s Breakfast of Champions, Virginia Woolf’s Orlando, and Salman Rushdie’s Midnight’s Children. Pale Fire is also known for its vivid description of exile and the longing for one’s country that often accompanies it, a theme that is also explored in On Earth We’re Briefly Gorgeous by Ocean Vuong, The Emigrants by W.G. Sebald, and The Yiddish Policemen’s Union by Michael Chabon. Lastly, Pale Fire examines sexuality and bias against the gay community, which can also be seen in Dashka Slater’s The 57 Bus, James Baldwin’s Go Tell It on the Mountain, and Tony Kushner’s Angels in America.
Key Facts about Pale Fire

Literary Irony. At a social event in 1916, Zinaida Gippius, a famous Russian writer and philosopher, reportedly said to Nabokov’s father, “Please tell your son he will never be a writer.” Gippius made her request after Nabokov published his first book of poetry, and Nabokov went on to become a celebrated writer of both poetry and prose.

Accidental Death. In 1922, Nabokov’s father was shot and killed in Berlin trying to shield Pavel Milyukov, a fellow exile and leader of Russia’s Constitutional Democratic Party, from an assassin’s bullet. A similar tragedy is seen in Pale Fire. 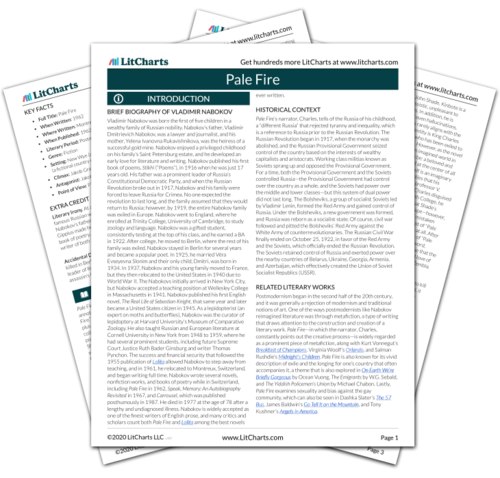 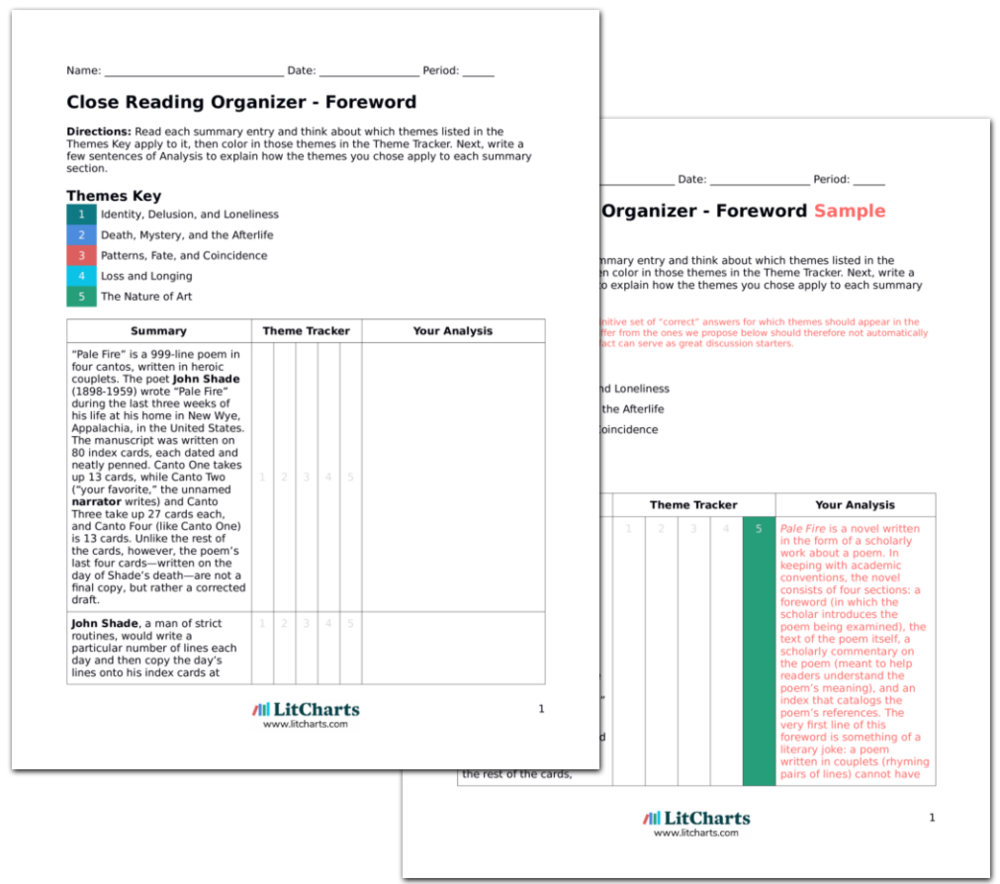