Download this LitChart! (PDF)
Teachers and parents! Struggling with distance learning? Our Teacher Edition on Pedro Páramo can help.

Welcome to the LitCharts study guide on Juan Rulfo's Pedro Páramo. Created by the original team behind SparkNotes, LitCharts are the world's best literature guides.

A concise biography of Juan Rulfo plus historical and literary context for Pedro Páramo.

A quick-reference summary: Pedro Páramo on a single page.

In-depth summary and analysis of every section of Pedro Páramo. Visual theme-tracking, too.

Explanations of Pedro Páramo's symbols, and tracking of where they appear.

An interactive data visualization of Pedro Páramo's plot and themes.

Mexican writer Juan Rulfo was born in rural Jalisco, just across the state border from Comala, and raised in the state capital of Guadalajara. His family were conservative landowners who suffered during the Mexican Revolution and Cristero War. These events, which marked him for life, form the historical backdrop to his work. In fact, Rulfo’s father was murdered in a dispute over land during this period. Rulfo moved to Mexico City after secondary school and briefly attended the National Military Academy, but he ended up working as a government clerk instead. He spent his evenings and weekends reading and attending literature classes at the National Autonomous University of Mexico (UNAM). He also co-founded and published many stories in the literary magazine Pan. From 1946-1952, he worked as a traveling salesman for the Goodrich tire company, which allowed him to revisit the rural settings of his childhood that ultimately dominated his work. He finished both The Burning Plain and Other Stories (1953) and Pedro Páramo (1955) during a fellowship at the Centro Mexicano de Escritores. After releasing his two principal works just two years apart, Rulfo published virtually nothing and stayed out of the spotlight for the rest of his life. He won the inaugural Xavier Villaurrutia Award for Pedro Páramo in 1955 and the National Prize for Arts and Sciences in Linguistics and Literature in 1970, among many other awards. In addition to writing fragments of further novels and a number of screenplays, Rulfo split the rest of his life between government service in the protection of indigenous groups and various literary organizations, like the Mexican Academy of Letters. Rulfo has had a remarkable impact on Latin American literature, especially given how little work he produced during his lifetime. However he remains less known in the rest of the world, in part because his work—written in the rural dialects of poor farmers—is so difficult to faithfully translate.
Get the entire Pedro Páramo LitChart as a printable PDF.
"My students can't get enough of your charts and their results have gone through the roof." -Graham S.
Download 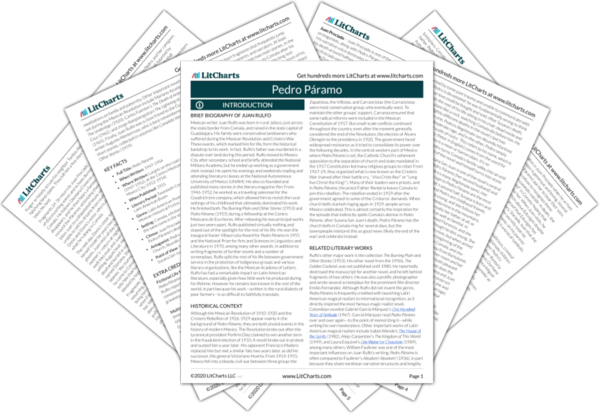 Although the Mexican Revolution of 1910-1920 and the Cristero Rebellion of 1926-1929 appear mainly in the background of Pedro Páramo, they are both pivotal events in the history of modern Mexico. The Revolution broke out after the tyrannical president Porfirio Díaz claimed to win another term in the fraudulent election of 1910. A revolt broke out in protest and ousted him a year later. His opponent Francisco Madero replaced him but met a similar fate two years later, as did his successor, the general Victoriano Huerta. From 1914-1915, Mexico fell into a bloody civil war between three group: the Zapatistas, the Villistas, and Carrancistas (the Carrancistas were most conservative group, who eventually won). To maintain the other groups’ support, Carranza ensured that some radical reforms were included in the Mexican Constitution of 1917. But small-scale conflicts continued throughout the country, even after the moment generally considered the end of the Revolution, the election of Álvaro Obregón to the presidency in 1920. The government faced widespread resistance as it tried to consolidate its power over the following decades. In the central-western part of Mexico where Pedro Páramo is set, the Catholic Church’s vehement opposition to the separation of church and state mandated in the 1917 Constitution led many religious groups to rebel. From 1927-29, they organized what is now known as the Cristero War (named after their battle cry, “¡Viva Cristo Rey!” or “Long live Christ the King!”). Many of their leaders were priests, and in Pedro Páramo, the priest Father Rentería leaves Comala to join this rebellion. The rebellion ended in 1929 after the government agreed to some of the Cristeros’ demands. When church bells started ringing again in 1929, people across Mexico celebrated. This is almost certainly the inspiration for the episode that indirectly spells Comala’s demise in Pedro Páramo: after Susana San Juan’s death, Pedro Páramo has the church bells in Comala ring for several days, but the townspeople interpret this as good news (likely the end of the war) and celebrate instead.

Other Books Related to Pedro Páramo

Rulfo’s other major work is the collection The Burning Plain and Other Stories (1953). His other novel from the 1950s, The Golden Cockerel, was not published until 1980. He reportedly destroyed the manuscript for another novel, and he left behind fragments of two others. He was also a prolific photographer and wrote several screenplays for the prominent film director Emilio Fernández. Although Rulfo did not invent the genre, Pedro Páramo is frequently credited with launching Latin American magical realism to international recognition, as it directly inspired the most famous magic realist novel, Colombian novelist Gabriel García Márquez’s One Hundred Years of Solitude (1967). García Márquez read Pedro Páramo over and over again—to the point of memorizing it—while writing his own masterpiece. Other important works of Latin American magical realism include Isabel Allende’s The House of the Spirits (1982), Alejo Carpentier’s The Kingdom of This World (1949), and Laura Esquivel’s Like Water for Chocolate (1989), among many others. William Faulkner was one of the most important influences on Juan Rulfo’s writing; Pedro Páramo is often compared to Faulkner’s Absalom! Absalom! (1936), in part because they share nonlinear narrative structures and lengthy meditations on family and paternity. Other important novels set during the Mexican Revolution include Mariano Azuela’s The Underdogs (1920), Carlos Fuentes’s The Death of Artemio Cruz (1962), and Jorge Ibargüengoitia’s The Lightning of August (1965). Finally, Juan Rulfo was a close friend to the Guatemalan writer Augusto Monterroso, who is best remembered for his short stories, collected in volumes like Complete Works and Other Stories (1959).
Key Facts about Pedro Páramo

Fictional Life for Real Ghosts. The deceased protagonists of Pedro Páramo took their names from actual dead people—Juan Rulfo reportedly developed his characters by walking around cemeteries and selecting names and surnames from the gravestones he encountered.

Multiple Titles. Juan Rulfo changed this novel’s title several times before finally punishing it as Pedro Páramo. He originally titled it A Star Next to the Moon, then changed it to The Deserts of Earth, and later decided to call it The Murmurs, which refers to the echoes of the past that populate the novel and scare Juan Preciado to death in its middle section. Rulfo ultimately had to change the title to Pedro Páramo, in part to avoid confusion with another novel published that year. This has profoundly shaped the way generations of readers have interpreted the novel by turning Pedro Páramo into its central character. 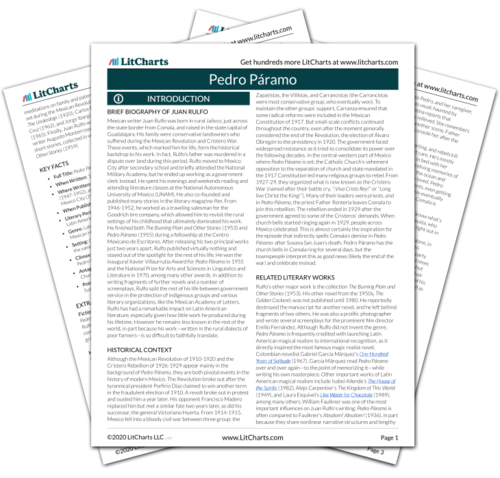 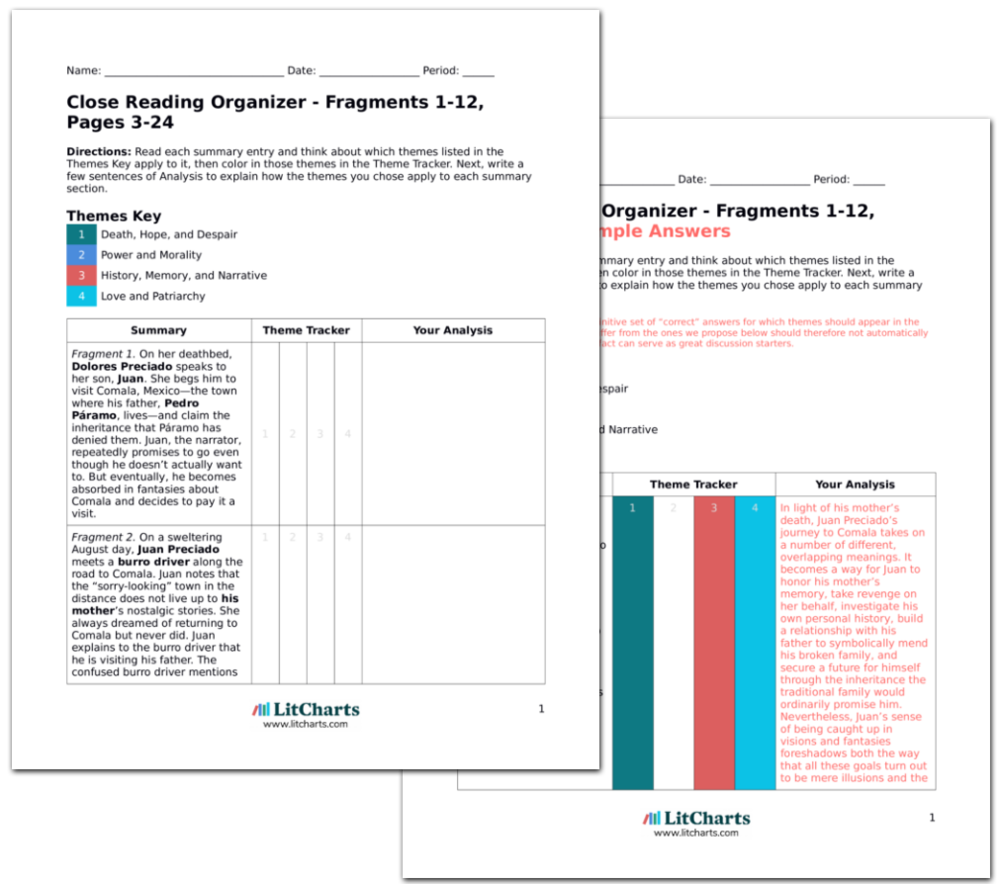