The novel opens with the vain Sir Walter, baronet of Kellynch Hall, poring over the Elliot family history. His wife passed away fourteen years ago, leaving behind three daughters: the youngest daughter, Mary, is married to the wealthy Charles Musgrove. Proud and beautiful Elizabeth is the eldest and her father’s favorite; Anne is gentle and sweet, but often overlooked by her father and sister. Their mother’s best friend, Lady Russell, helped Sir Walter raise his children. She remains a close and trusted family friend and maternal figure for Anne. The Elliots are an aristocratic, land-owning family. They have fallen into debt due to Sir Walter’s extravagant spending, and under the counsel of Lady Russell and Mr. Shepherd the family lawyer they rent their estate to Admiral and Mrs. Croft and move to Bath.

Admiral and Mrs. Croft are a respectable, well-off, and well-mannered Navy couple of good character. Despite Sir Walter’s initial reservations about the Navy as a profession that socially elevates lowborn men, he is pleased to have tenants of respectable social standing. The arrival of Mrs. Croft stirs powerful memories for Anne, as she is the sister of Captain Wentworth. Eight years ago, Anne and Captain Wentworth fell in love and were engaged to be married; however, Lady Russell, who believed the match to be foolish and unsuitable, as Captain Wentworth had no fortune or rank, persuaded Anne to break off the engagement. Anne anticipates seeing him in the country again.

While Sir Walter, Elizabeth, and Mrs. Clay (Elizabeth’s close friend and a widow of lower rank) travel to Bath, Anne visits her sister Mary at Uppercross to help her out and keep her company. Mary is self-absorbed and complains frequently; her husband, Charles, is good-natured and patient. The rest of the Musgrove family live nearby at the Great House; Anne finds them refreshingly unpretentious, cheerful, and warm. Mr. and Mrs. Musgrove have two grown daughters, Henrietta and Louisa.

Captain Wentworth arrives to visit his sister, Mrs. Croft, and quickly becomes a favorite among the Musgroves. He treats Anne with cold indifference, leading her to the painful conclusion that he no longer loves her. He flirts instead with Louisa and Henrietta, who are quite smitten with him. The party meets Captain and Mrs. Harville, friends of Captain Wentworth, and Captain Benwick at Lyme. On one of their walks, they encounter a gentleman who openly admires Anne—he is later discovered to be Mr. Elliot, Sir Walter’s estranged heir. When Louisa takes a bad fall because of her stubborn impulsiveness, Anne directs the others to care for her. The Harvilles kindly nurse Louisa over the next few months; Captain Wentworth feels responsible for the accident and stays for a time in Lyme.

Anne and Lady Russell join Sir Walter and Elizabeth in Bath. They learn that Mr. Elliot is in Bath and made great efforts to reconcile with the family. He is universally charming and continues to express great admiration for Anne, who finds him sensible and well-mannered though neither open nor warm. Admiral and Mrs. Croft arrive in Bath with the surprising news that Louisa is engaged to Captain Benwick and Henrietta to Charles Hayter, her cousin. Captain Wentworth is completely unattached; he arrives in Bath soon after, and it becomes evident that he is jealous of Mr. Elliot’s attentions to Anne. Lady Russell believes Mr. Elliot to be a perfect match for her beloved Anne, but Anne remains suspicious of Mr. Elliot’s past. She continues to harbor a steadfast and unwavering love for Captain Wentworth.

During her time at Bath, Anne reconnects with an old school friend, Mrs. Smith, who has fallen on hard times. The crippled, impoverished, and widowed Mrs. Smith informs her of Mr. Elliot’s dark past: he betrayed Mrs. Smith’s husband and wronged Mrs. Smith financially, and he now plans to marry Anne because he is fearful that he will lose the baronetcy if Mrs. Clay marries Sir Walter, and the marriage to Anne would ensure his inheritance. Anne is appalled that she was almost persuaded to marry Mr. Elliot by Lady Russell.

Captain Wentworth writes a letter professing his continued devotion for Anne. Anne is shaken and ecstatic; they renew their vows and engagement to each other. Eight years in the navy have elevated Captain Wentworth in fortune and social rank; he is now an eligible match for the daughter of a foolish and spendthrift baronet. Sir Walter poses no objection to their marriage, and Lady Russell also comes to accept and befriend Captain Wentworth. Mr. Elliot is shocked and disappointed; he leaves Bath with Mrs. Clay, whose affections he has turned away from Sir Walter. Anne and Captain Wentworth finally enjoy a mature marriage with an appreciation and tenderness enhanced by their long years apart. 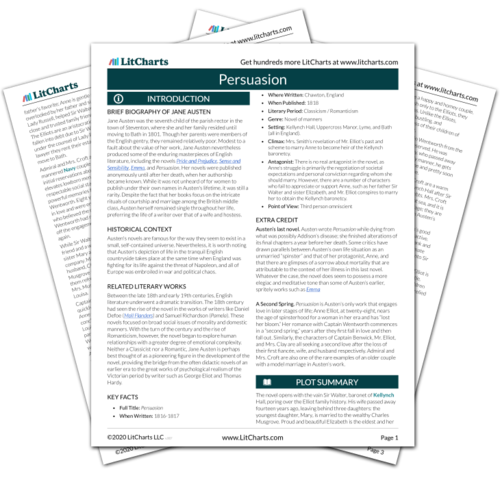