Welcome to the LitCharts study guide on Sophocles's Philoctetes. Created by the original team behind SparkNotes, LitCharts are the world's best literature guides.

A concise biography of Sophocles plus historical and literary context for Philoctetes.

A quick-reference summary: Philoctetes on a single page.

In-depth summary and analysis of every scene of Philoctetes. Visual theme-tracking, too.

Explanations of Philoctetes's symbols, and tracking of where they appear.

An interactive data visualization of Philoctetes's plot and themes.

Sophocles was born in 496 BCE in Colonus, a village outside of Athens, Greece. Sophocles’s father, Sophillus, was a wealthy manufacturer of armor and arms, and Sophocles enjoyed a rather privileged childhood. He was afforded the absolute best of Greek education, and he was known as a young man for his supreme athletic ability and stunning good looks. In his early years, Sophocles was active in theater as an actor, and at age 16, he led the paean, or choral chant, to celebrate the Greek victory against the Persian Empire at the Battle of Salamis. Citing a weak voice, Sophocles left the acting scene and focused his energy exclusively on writing tragic plays and poems. At the center of Athenian life during Sophocles’s time was the Dionysia, a large festival in honor of Dionysius, the Greek god of theater. The festival was made up of two separate festivals, the Rural Dionysia and the City Dionysia, which were held at different times of the year. The Dionysia lasted for several days and culminated with the staging of several plays—three sets of three tragedies and a tragicomedy, as well as five comedies—with winners selected by a panel of judges in the categories of tragedy and comedy. Sophocles won his first Dionysian festival in 468, and while that play has been lost to antiquity, it is known that Sophocles beat out his famous contemporary, Aeschylus, to take first place. Sophocles is thought to have competed in at least 30 Dionysian festivals, in which he won first place 24 times and never came in below second. Sophocles has more first place wins at Dionysian festivals than either of his renowned contemporaries, Aeschylus and Euripides. The best plays of the Dionysia were distributed to the public in printed form and were studied in Greek schools, and many of Sophocles’s plays made this illustrious list. Sophocles wrote at least 123 plays during his prolific career (although only seven have survived antiquity), including Antigone, Oedipus Rex, and Electra, but Philoctetes is one of the only Greek tragedies that can be firmly dated. Sophocles wrote and staged Philoctetes in 409, winning the City Dionysia, when he was almost 90 years old. Sophocles’s success at the festivals made him extremely popular, and he was elected to several public offices throughout this lifetime, including the treasurer of Athens in 442 BCE, and stratēgoi, a type of high-level military commander, in 440. It is thought that Sophocles was elected twice more as stratēgoi after 440. Sophocles was also a priest in the hero cult of Halon and was a highly respected member of Athenian society. He died around 406 BCE in Athens at the age of 92.
Get the entire Philoctetes LitChart as a printable PDF.
"My students can't get enough of your charts and their results have gone through the roof." -Graham S.
Download 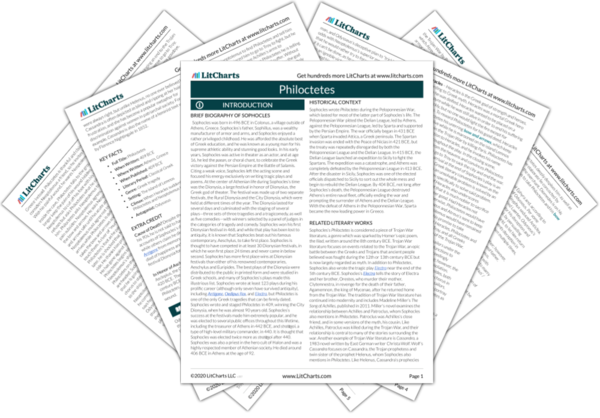 Other Books Related to Philoctetes

Sophocles’s Philoctetes is considered a piece of Trojan War literature, a genre which was sparked by Homer’s epic poem, the Iliad, written around the 8th century BCE. Trojan War literature focuses on events related to the Trojan War, an epic battle between the Greeks and Trojans that ancient people believed was fought during the 12th or 13th century BCE but is now largely regarded as myth. In addition to Philoctetes, Sophocles also wrote the tragic play Electra near the end of the 5th century BCE. Sophocles’s Electra tells the story of Electra and her brother, Orestes, who murder their mother, Clytemnestra, in revenge for the death of their father, Agamemnon, the king of Mycenae, after he returned home from the Trojan War. The tradition of Trojan War literature has continued into modernity and includes Madeline Miller’s The Song of Achilles, published in 2011. Miller’s novel examines the relationship between Achilles and Patroclus, whom Sophocles also mentions in Philoctetes. Patroclus was Achilles’s close friend, and in some versions of the myth, his cousin. Like Achilles, Patroclus was killed during the Trojan War, and their relationship is central to many of the stories surrounding the war. Another example of Trojan War literature is Cassandra, a 1983 novel written by East German writer Christa Wolf. Wolf’s Cassandra focuses on Cassandra, the Trojan prophetess and twin sister of the prophet Helenus, whom Sophocles also mentions in Philoctetes. Like Helenus, Cassandra’s prophecies were always right, but unlike Helenus, no one ever believed her. Cassandra is often depicted as blind and ripping at her hair in frustration, and she has become a popular metaphor for discrimination against women in patriarchal society. For example, Cassandra is also the name of a feminist text written by Florence Nightingale in 1852.
Key Facts about Philoctetes

Cause of Death? Despite the fact that Sophocles lived well into his 90s, he is not said to have died of natural causes. Some accounts of Sophocles’s death claim he choked on a grape, while others claim he died from exhaustion after reciting all of Antigone from memory. Other sources report that Sophocles died of happiness and delight after winning first place in the festival Dionysia for the 24th time.

In Honor of Asclepius. Sophocles constructed an altar to Asclepius, the Greek god of medicine and healing, in his home in 420 BCE. The cult of Asclepius was very popular during the 5th century BCE, and Sophocles indeed mentions Asclepius in Philoctetes, as he is the only one who can heal Philoctetes’s wound.