Download this LitChart! (PDF)
Teachers and parents! Struggling with distance learning? Our Teacher Edition on Oedipus Rex can help.

Welcome to the LitCharts study guide on Sophocles's Oedipus Rex. Created by the original team behind SparkNotes, LitCharts are the world's best literature guides.

A concise biography of Sophocles plus historical and literary context for Oedipus Rex.

A quick-reference summary: Oedipus Rex on a single page.

In-depth summary and analysis of every section of Oedipus Rex. Visual theme-tracking, too.

Explanations of Oedipus Rex's symbols, and tracking of where they appear.

An interactive data visualization of Oedipus Rex's plot and themes.

Considered one of the three greatest playwrights of classical Greek theater, Sophocles was a friend of Pericles and Herodotus, and a respected citizen who held political and military offices in fifth-century B.C.E. Athens. He won fame by defeating the playwright Aeschylus for a prize in tragic drama at Athens in 468 B.C.E. Only seven of his complete plays have survived to reach the modern era, but he wrote more than 100 and won first prize in 24 contests. Best known are his three Theban plays, Antigone, Oedipus Rex, and Oedipus at Colonus. Sophocles's other complete surviving works are Electra, Philoctetes, and Trachinian Women. He is credited with changing Greek drama by adding a third actor, reducing the role of the chorus, and paying greater attention to character development.
Get the entire Oedipus Rex LitChart as a printable PDF.
"My students can't get enough of your charts and their results have gone through the roof." -Graham S.
Download 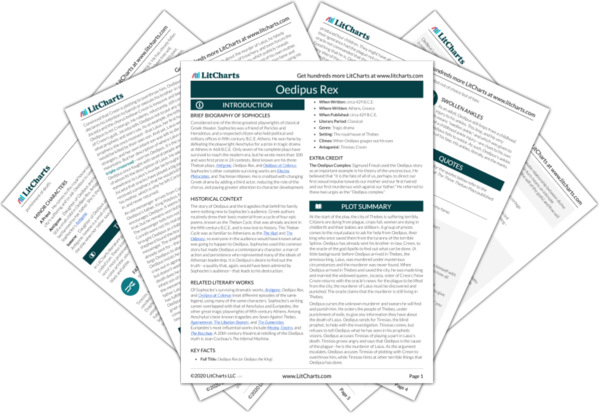 The story of Oedipus and the tragedies that befell his family were nothing new to Sophocles's audience. Greek authors routinely drew their basic material from a cycle of four epic poems, known as the Theban Cycle, that was already ancient in the fifth century B.C.E. and is now lost to history. The Theban Cycle was as familiar to Athenians as the The Iliad and The Odyssey, so everyone in the audience would have known what was going to happen to Oedipus. Sophocles used this common story but made Oedipus a contemporary character, a man of action and persistence who represented many of the ideals of Athenian leadership. It is Oedipus's desire to find out the truth—a quality that, again, would have been admired by Sophocles's audience—that leads to his destruction.

Other Books Related to Oedipus Rex

Of Sophocles's surviving dramatic works, Antigone, Oedipus Rex, and Oedipus at Colonus treat different episodes of the same legend, using many of the same characters. Sophocles's writing career overlapped with that of Aeschylus and Euripedes, the other great tragic playwrights of fifth-century Athens. Among Aeschylus's best-known tragedies are Seven Against Thebes, Agamemnon, The Libation Bearers, and The Eumenides. Euripedes's most influential works include Medea, Electra, and The Bacchae. A 20th-century theatrical retelling of the Oedipus myth is Jean Cocteau's The Infernal Machine.
Key Facts about Oedipus Rex

The Oedipus Complex: Sigmund Freud used the Oedipus story as an important example in his theory of the unconscious. He believed that "It is the fate of all of us, perhaps, to direct our first sexual impulse towards our mother and our first hatred and our first murderous wish against our father." He referred to these two urges as the "Oedipus complex."