Download this LitChart! (PDF)
Teachers and parents! Struggling with distance learning? Our Teacher Edition on Piecing Me Together can help.

Welcome to the LitCharts study guide on Renée Watson's Piecing Me Together. Created by the original team behind SparkNotes, LitCharts are the world's best literature guides.

Piecing Me Together: Introduction

A concise biography of Renée Watson plus historical and literary context for Piecing Me Together.

Piecing Me Together: Plot Summary

A quick-reference summary: Piecing Me Together on a single page.

Piecing Me Together: Detailed Summary & Analysis

In-depth summary and analysis of every chapter of Piecing Me Together. Visual theme-tracking, too.

Piecing Me Together: Themes

Explanations, analysis, and visualizations of Piecing Me Together's themes.

Piecing Me Together: Quotes

Piecing Me Together: Characters

Description, analysis, and timelines for Piecing Me Together's characters.

Piecing Me Together: Symbols

Explanations of Piecing Me Together's symbols, and tracking of where they appear.

Piecing Me Together: Theme Wheel

An interactive data visualization of Piecing Me Together's plot and themes.

Watson was born in Patterson, New Jersey—the youngest of five kids—but she grew up in Portland, Oregon after her parents’ divorce. She discovered the Harlem Renaissance poet Langston Hughes in school and fell in love with poetry and writing, a passion that her parents and teachers encouraged. As a senior in high school, Watson helped teach poetry to younger students, something that she went on to do professionally for 20 years before becoming a novelist and that she has continued to do since publishing her first books. Watson’s first book, a picture book to help explain hurricanes to children, was published during Watson’s final term at the New School, where she was studying creative writing and art therapy. She has since written another picture book and several middle grade and young adult novels, though Piecing Me Together is her most well-known and critically-acclaimed work. The novel was inspired in part by Watson’s experiences as a mentor and as a mentee. She had several wonderful mentors as a child and as a teen, but while acting as a mentor for high school students from her high school, she was angry about the way the organizers spoke about the community in the introductory mentor meeting. Watson reminded them that they needed to respect the neighborhood (Watson and the mentees’ home) and ask the kids what they needed, rather than just focusing on what the organizers thought needed to change. Today, Watson lives in New York City. In addition to writing, she continues to teach writing and theater to children.
Get the entire Piecing Me Together LitChart as a printable PDF.
"My students can't get enough of your charts and their results have gone through the roof." -Graham S.
Download 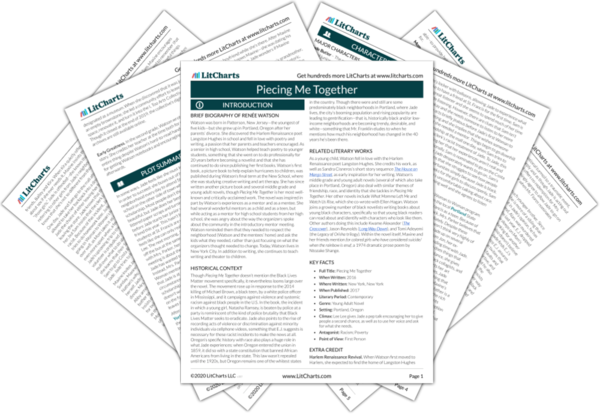 Historical Context of Piecing Me Together

Though Piecing Me Together doesn’t mention the Black Lives Matter movement specifically, it nevertheless looms large over the novel. The movement rose up in response to the 2014 killing of Michael Brown, a black teen, by a white police officer in Mississippi, and it campaigns against violence and systemic racism against black people in the U.S. In the book, the incident in which a young girl, Natasha Ramsey, is beaten by police at a party is reminiscent of the kind of police brutality that Black Lives Matter seeks to eradicate. Jade also points to the rise of recording acts of violence or discrimination against minority individuals via cellphone videos, something that E.J. suggests is necessary for these racist incidents to make the news at all. Oregon’s specific history with race also plays a huge role in what Jade experiences: when Oregon entered the union in 1859, it did so with a state constitution that banned African Americans from living in the state. This law wasn’t repealed until the 1920s, but Oregon remains one of the whitest states in the country. Though there were and still are some predominately black neighborhoods in Portland, where Jade lives, the city’s booming population and rising popularity are leading to gentrification—that is, historically black and/or low-income neighborhoods are becoming trendy, desirable, and white—something that Mr. Franklin eludes to when he mentions how much his neighborhood has changed in the 40 years he’s been there.

Other Books Related to Piecing Me Together

As a young child, Watson fell in love with the Harlem Renaissance poet Langston Hughes. She credits his work, as well as Sandra Cisneros’s short story sequence The House on Mango Street, as early inspiration for her writing. Watson’s middle grade and young adult novels (several of which also take place in Portland, Oregon) also deal with similar themes of friendship, race, and identity that she tackles in Piecing Me Together. Her other novels include What Momma Left Me and Watch Us Rise, which she co-wrote with Ellen Hagan. Watson joins a growing number of black novelists writing books about young black characters, specifically so that young black readers can read about and identify with characters who look like them. Other authors doing this include Kwame Alexander (The Crossover), Jason Reynolds (Long Way Down), and Tomi Adeyemi (the Legacy of Orïsha trilogy). Within the novel itself, Maxine and her friends mention for colored girls who have considered suicide/when the rainbow is enuf, a 1974 dramatic prose poem by Ntozake Shange.
Key Facts about Piecing Me Together

Extra Credit for Piecing Me Together

Harlem Renaissance Revival. When Watson first moved to Harlem, she expected to find the home of Langston Hughes designated as a museum. When she discovered that it was just an empty brownstone, she led a community effort to lease the space, renovate it, and turn it into the I, Too Arts Collective. Though it closed at the end of 2019, the collective’s digital archives are still available online.

Early Greatness. In the second grade, Watson wrote a 21-page story. She credits her teacher at the time both for reading the entire thing despite Watson’s hard-to-read handwriting, and for getting Watson notebooks and encouraging her to write afterwards. 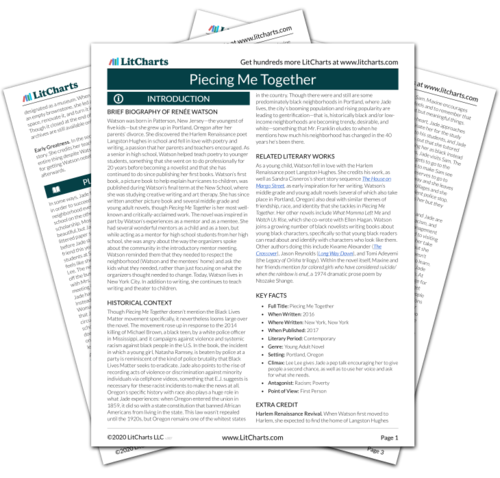 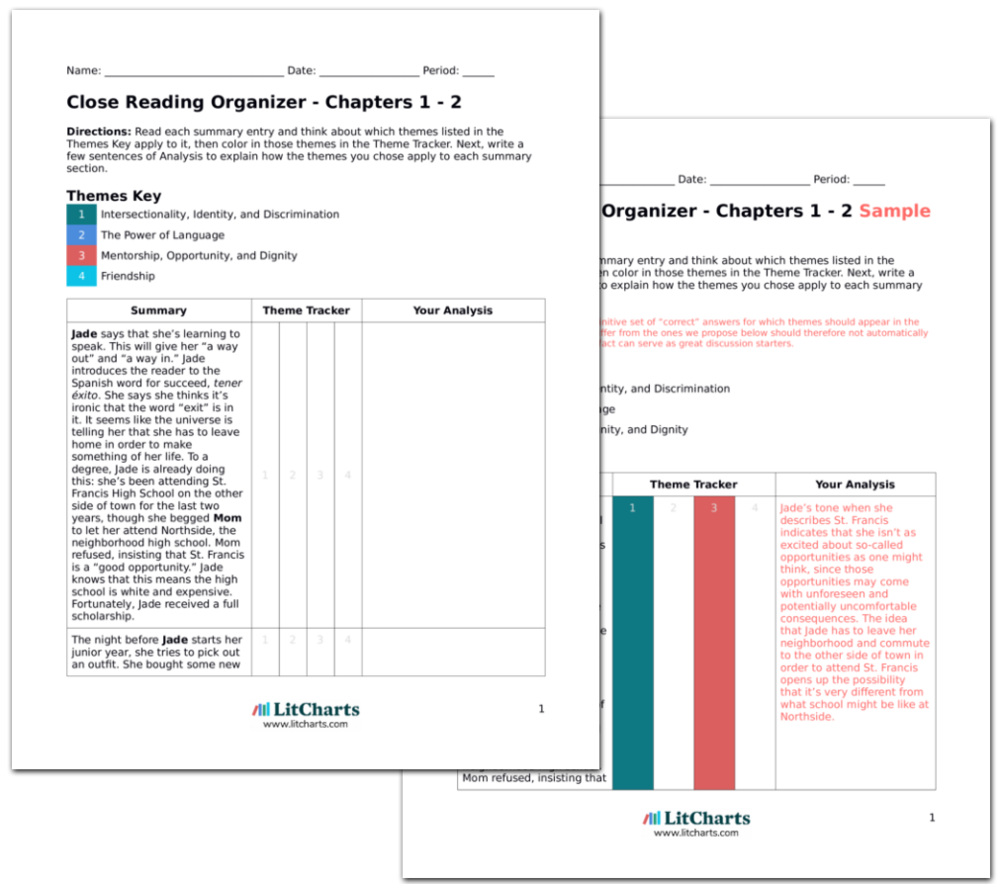