Download this LitChart! (PDF)
Teachers and parents! Struggling with distance learning? Our Teacher Edition on Long Way Down can help.

Welcome to the LitCharts study guide on Jason Reynolds's Long Way Down. Created by the original team behind SparkNotes, LitCharts are the world's best literature guides.

A concise biography of Jason Reynolds plus historical and literary context for Long Way Down.

A quick-reference summary: Long Way Down on a single page.

In-depth summary and analysis of every chapter of Long Way Down. Visual theme-tracking, too.

Explanations of Long Way Down's symbols, and tracking of where they appear.

Reynolds grew up in Oxon Hill, Maryland, an unincorporated suburb of Washington, D.C. While a young student, Reynolds grew frustrated by what his teachers assigned him to read—he found that he couldn’t identify with the characters or get interested in books that seemed to have little to do with his lived experience. Because of this, he didn’t read a novel until he was 17. Two things began to turn Reynolds onto literature and poetry: rap music in the form of Queen Latifah’s album Black Reign as a young kid, and Richard Wright’s novel Black Boy as an older teen. Inspired by Queen Latifah, Reynolds wrote poetry all through his teen years and through college, even as he failed English classes. His first novel, co-written with Jason Griffin, was a critical and financial failure, so Reynolds took a job managing a Rag and Bone clothing store and contemplated giving up on writing. A friend, however, encouraged Reynolds to write in his own voice. The result was When I Was the Greatest. Since then, Reynolds has written several other young adult novels, mostly about young black characters living in neighborhoods that resemble the one where he grew up. His goal is to help improve literacy rates, and specifically, to help convert “book-haters” by writing books that he would’ve been interested in as a young person.
Get the entire Long Way Down LitChart as a printable PDF.
"My students can't get enough of your charts and their results have gone through the roof." -Graham S.
Download 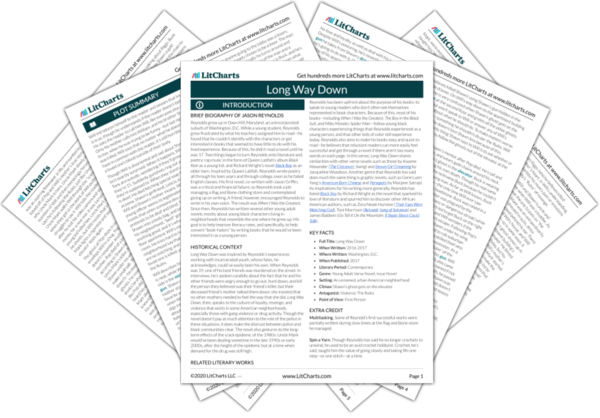 Historical Context of Long Way Down

Long Way Down was inspired by Reynolds’s experiences working with incarcerated youth, whose fates, he acknowledges, could’ve easily been his own. When Reynolds was 19, one of his best friends was murdered on the street. In interviews, he’s spoken candidly about the fact that he and his other friends were angry enough to go out, hunt down, and kill the person they believed was their friend’s killer, but their deceased friend’s mother talked them down: she insisted that no other mothers needed to feel the way that she did. Long Way Down, then, speaks to the culture of loyalty, revenge, and violence that exists in some American neighborhoods, especially those with gang violence or drug activity. Though the novel doesn’t pay as much attention to the role of the police in these situations, it does make the distrust between police and black communities clear. The novel also gestures to the long-term effects of the crack epidemic of the 1980s: Uncle Mark would’ve been dealing sometime in the late 1990s or early 2000s, after the height of the epidemic but at a time when demand for the drug was still high.

Other Books Related to Long Way Down

Reynolds has been upfront about the purpose of his books: to speak to young readers who don’t often see themselves represented in book characters. Because of this, most of his books—including When I Was the Greatest, The Boy in the Black Suit, and Miles Morales: Spider-Man—follow young black characters experiencing things that Reynolds experienced as a young person, and that other kids of color still experience today. Reynolds also aims to make his books easy and quick to read—he believes that reluctant readers can more easily feel successful and get through a novel if there aren’t too many words on each page. In this sense, Long Way Down shares similarities with other verse novels such as those by Kwame Alexander (The Crossover; Swing) and Brown Girl Dreaming by Jacqueline Woodson. Another genre that Reynolds has said does much the same thing is graphic novels, such as Gene Luen Yang’s American Born Chinese and Persepolis by Marjane Satrapi. As inspirations for his writing more generally, Reynolds has listed Black Boy by Richard Wright as the novel that sparked his love of literature and spurred him to discover other African American authors, such as Zora Neale Hurston (Their Eyes Were Watching God), Toni Morrison (Beloved; Song of Solomon) and James Baldwin (Go Tell it On the Mountain; If Beale Street Could Talk).
Key Facts about Long Way Down

Extra Credit for Long Way Down

Multitasking. Some of Reynold’s first successful works were partially written during slow times at the Rag and Bone store he managed.

Spin a Yarn. Though Reynolds has said he no longer crochets to unwind, he used to be an avid crochet hobbyist. Crochet, he’s said, taught him the value of going slowly and taking life one step—or one stitch—at a time. 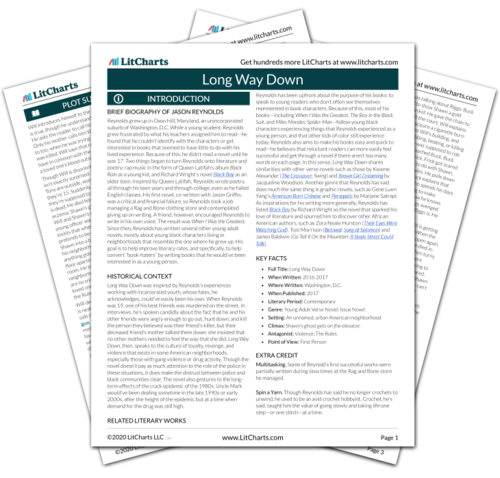 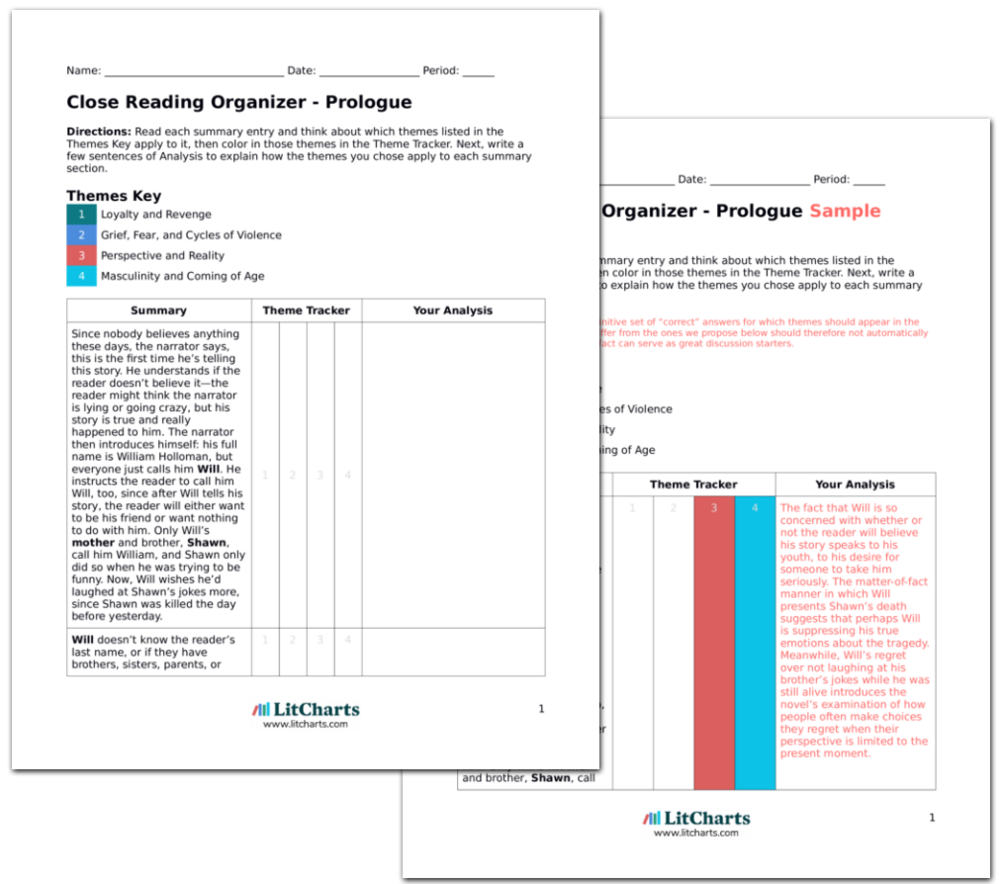