Download this LitChart! (PDF)
Teachers and parents! Struggling with distance learning? Our Teacher Edition on Rhinoceros can help.

Welcome to the LitCharts study guide on Eugene Ionesco's Rhinoceros. Created by the original team behind SparkNotes, LitCharts are the world's best literature guides.

A concise biography of Eugene Ionesco plus historical and literary context for Rhinoceros.

A quick-reference summary: Rhinoceros on a single page.

In-depth summary and analysis of every scene of Rhinoceros. Visual theme-tracking, too.

Explanations of Rhinoceros's symbols, and tracking of where they appear.

An interactive data visualization of Rhinoceros's plot and themes.

Ionesco was born in Romania, though he spent most of his childhood in France. As a child, Ionesco had an out of body experience of sorts in which he felt as though he was floating and illuminated—and, after returning to the ground, he felt that the world looked corrupt, decayed, and meaningless. This experience influenced many of his later works, including Rhinoceros. He returned to Romania as a teenager following his parents’ divorce and studied French literature at the University of Bucharest. Ionesco married in 1936, had a daughter, and returned to Paris to study in 1938. When World War II broke out in 1939, Ionesco briefly tried to return to Romania but ended up waiting out the war in Marseilles, France, before returning to Paris soon after the war ended. Throughout his career, Ionesco wrote criticism, poetry, one novel, and theoretical works. He wrote primarily in French.
Get the entire Rhinoceros LitChart as a printable PDF.
"My students can't get enough of your charts and their results have gone through the roof." -Graham S.
Download 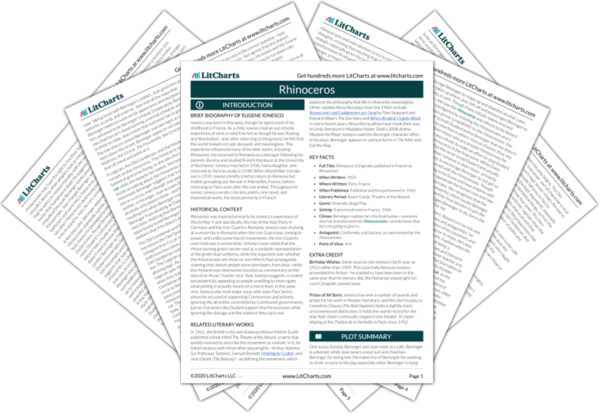 Rhinoceros was inspired primarily by Ionesco’s experience of World War II and specifically, the rise of the Nazi Party in Germany and the Iron Guard in Romania. Ionesco was studying at a university in Romania when the Iron Guard was coming to power, and unlike some fascist movements, the Iron Guard’s main hold was in universities. Scholars have noted that the rhinos turning green can be read as a symbolic representation of the green Nazi uniforms, while the argument over whether the rhinoceroses are Asian or not reflects Nazi propaganda claiming that Jewish people were interlopers from Asia—while the rhinoceroses themselves function as commentary on the idea of an Aryan “master race” that, Ionesco suggests, is violent but powerfully appealing to people unwilling to interrogate what joining in actually means on a moral level. In the same vein, Ionesco also took major issue with Jean-Paul Sartre, whom he accused of supporting Communism and actively ignoring the atrocities committed by Communist governments, just as characters like Dudard support the rhinoceroses while ignoring the damage and the violence they carry out.

Other Books Related to Rhinoceros

In 1961, the British critic and drama professor Martin Esslin published a book titled The Theatre of the Absurd, a name that quickly evolved to describe the movement as a whole. In it, he linked Ionesco with three other playwrights—Arthur Adamov (La Professeur Taranne), Samuel Beckett (Waiting for Godot), and Jean Genet (The Balcony)—as defining the movement, which explored the philosophy that life is inherently meaningless. Other notable Absurdist plays from the 1960s include Rosencrantz and Guildenstern are Dead by Tom Stoppard and Edward Albee’s The Zoo Story and Who’s Afraid of Virginia Woolf. In more recent years, Absurdist qualities have made their way to Urdu literature in Mujtaba Haider Zaidi’s 2008 drama Mazaron Ke Phool. Ionesco used the Berenger character often in his plays. Berenger appears in various forms in The Killer and Exit the King.
Key Facts about Rhinoceros

Birthday Wishes. Some sources cite Ionesco’s birth year as 1912 rather than 1909. This is partially because Ionesco promoted this fiction—he wanted to have been born in the same year that his literary idol, the Romanian playwright Ion Luca Caragiale, passed away.

Prizes of All Sorts. Ionesco has won a number of awards and prizes for his work in theater, literature, and film, but his play La Cantatrice Chauve (The Bald Soprano) holds a slightly more unconventional distinction: it holds the world record for the play that’s been continually staged in one theater. It’s been playing at the Théâtre de la Huchette in Paris since 1952. 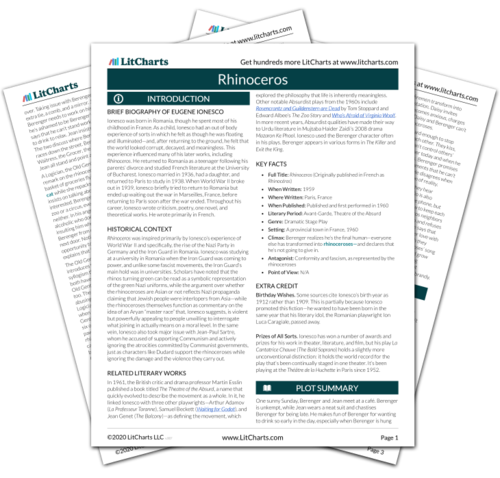 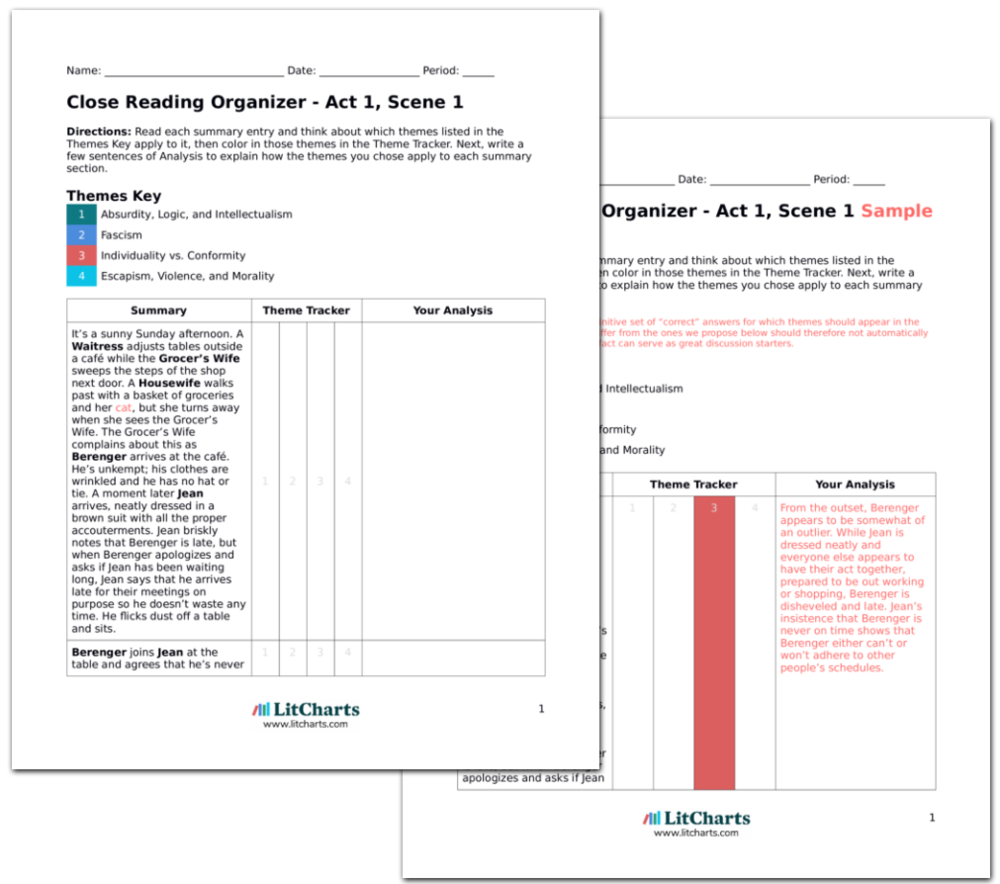