Welcome to the LitCharts study guide on Leigh Bardugo's Shadow and Bone. Created by the original team behind SparkNotes, LitCharts are the world's best literature guides.

A concise biography of Leigh Bardugo plus historical and literary context for Shadow and Bone.

A quick-reference summary: Shadow and Bone on a single page.

In-depth summary and analysis of every chapter of Shadow and Bone. Visual theme-tracking, too.

Explanations, analysis, and visualizations of Shadow and Bone's themes.

Description, analysis, and timelines for Shadow and Bone's characters.

Description, analysis, and timelines for Shadow and Bone's terms.

Explanations of Shadow and Bone's symbols, and tracking of where they appear.

An interactive data visualization of Shadow and Bone's plot and themes.

Though Bardugo was born in Israel, her grandparents raised her in Los Angeles, California. She attended Yale University and studied English, graduating in 1997. For the next 13 years, Bardugo worked in copywriting, journalism, special effects, and finally became a makeup artist. But in 2010, as she grappled with depression following her father’s death, and as she was getting out of an abusive marriage, Bardugo decided to begin writing a little bit every day. The result was her debut novel, Shadow and Bone, which went on to become an international bestseller. Bardugo followed it with two more novels tracing Alina’s story, and then two more duologies that take place in the same fictional world. Today, Bardugo is one of the most popular authors of young adult fantasy novels, and she was heavily involved in Netflix’s adaptation of Shadow and Bone into a TV series.
Get the entire Shadow and Bone LitChart as a printable PDF.
"My students can't get enough of your charts and their results have gone through the roof." -Graham S.
Download 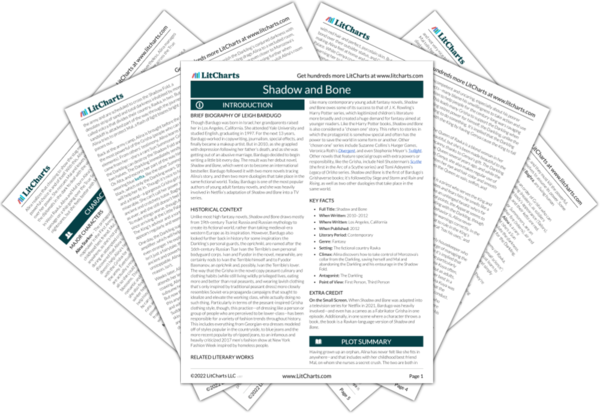 Historical Context of Shadow and Bone

Unlike most high fantasy novels, Shadow and Bone draws mostly from 19th-century Tsarist Russia and Russian mythology to create its fictional world, rather than taking medieval-era western Europe as its inspiration. However, Bardugo also looked further back in history for some inspiration: the Darkling’s personal guards, the oprichniki, are named after the 16th-century Russian Tsar Ivan the Terrible’s own personal bodyguard corps. Ivan and Fyodor in the novel, meanwhile, are certainly nods to Ivan the Terrible himself and to Fyodor Basmanov, an oprichnik and, possibly, Ivan the Terrible’s lover. The way that the Grisha in the novel copy peasant culinary and clothing habits (while still living wildly privileged lives, eating more and better than real peasants, and wearing lavish clothing that’s only inspired by traditional peasant dress) more closely resembles Soviet-era propaganda campaigns that sought to idealize and elevate the working class, while actually doing no such thing. Particularly in terms of the peasant-inspired Grisha clothing style, though, this practice—of dressing like a person or group of people who are perceived to be lower-class—has been responsible for a variety of fashion trends throughout history. This includes everything from Georgian-era dresses modeled off of styles popular in the countryside, to blue jeans and the more recent popularity of ripped jeans, to an infamous and heavily criticized 2017 men’s fashion show at New York Fashion Week inspired by homeless people.

Other Books Related to Shadow and Bone

Like many contemporary young adult fantasy novels, Shadow and Bone owes some of its success to that of J. K. Rowling’s Harry Potter series, which legitimized children’s literature more broadly and created a huge demand for fantasy aimed at younger readers. Like the Harry Potter books, Shadow and Bone is also considered a “chosen one” story. This refers to stories in which the protagonist is somehow special and often has the power to save the world in some form or another. Other “chosen one” series include Suzanne Collins’s Hunger Games, Veronica Roth’s Divergent, and even Stephenie Meyer’s Twilight. Other novels that feature special groups with extra powers or responsibility, like the Grisha, include Neil Shusterman’s Scythe (the first in the Arc of a Scythe series) and Tomi Adeyemi’s Legacy of Orïsha series. Shadow and Bone is the first of Bardugo’s Grishaverse books; it’s followed by Siege and Storm and Ruin and Rising, as well as two other duologies that take place in the same world.
Key Facts about Shadow and Bone

Extra Credit for Shadow and Bone

On the Small Screen. When Shadow and Bone was adapted into a television series for Netflix in 2021, Bardugo was heavily involved—and even has a cameo as a Fabrikator Grisha in one episode. Additionally, in one scene where a character throws a book, the book is a Ravkan-language version of Shadow and Bone.