Download this LitChart! (PDF)
Teachers and parents! Struggling with distance learning? Our Teacher Edition on Static can help.

Welcome to the LitCharts study guide on Cate Kennedy's Static. Created by the original team behind SparkNotes, LitCharts are the world's best literature guides.

A concise biography of Cate Kennedy plus historical and literary context for Static.

A quick-reference summary: Static on a single page.

In-depth summary and analysis of every of Static. Visual theme-tracking, too.

Explanations of Static's symbols, and tracking of where they appear.

An interactive data visualization of Static's plot and themes.

Born in 1963 in England, Cate Kennedy moved around with her parents throughout childhood, living in different parts of the U.K. and eventually settling in Australia. She graduated with a bachelor’s degree from the University of Canberra and has since gone on to teach writing at several universities. Kennedy also worked as a community arts coordinator in Victoria, Australia, and spent two years teaching adult literacy in Mexico with Australian Volunteers International in the 1990s. Kennedy is the author of the award-winning novel The World Beneath, as well as a number of poetry and short-story collections, including Like a House on Fire (in which “Static” appears). Her short stories have also been appeared in publications like The New Yorker and Harvard Review. Kennedy is the recipient of numerous literary awards, including the Age Short Story Award, the NSW Premier’s People’s Choice Award, and the Stella Prize. She currently lives in Victoria.
Get the entire Static LitChart as a printable PDF.
"My students can't get enough of your charts and their results have gone through the roof." -Graham S.
Download 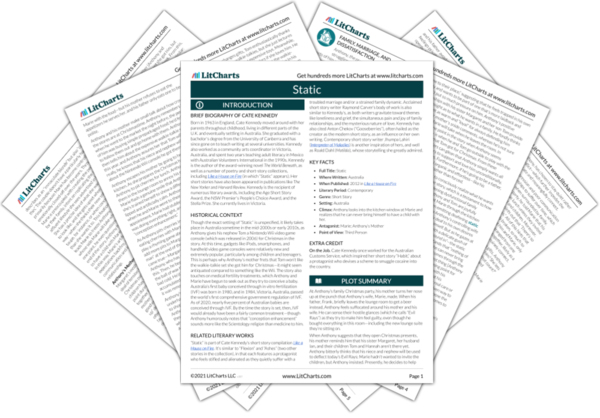 Though the exact setting of “Static” is unspecified, it likely takes place in Australia sometime in the mid-2000s or early 2010s, as Anthony gives his nephew Tom a Nintendo Wii video game console (which was released in 2006) for Christmas in the story. At this time, gadgets like iPods, smartphones, and handheld video game consoles were relatively new and extremely popular, particularly among children and teenagers. This is perhaps why Anthony’s mother frets that Tom won’t like the walkie-talkie set she got him for Christmas—it might seem antiquated compared to something like the Wii. The story also touches on medical fertility treatments, which Anthony and Marie have begun to seek out as they try to conceive a baby. Australia’s first baby conceived through in vitro fertilization (IVF) was born in 1980, and in 1984, Victoria, Australia, passed the world’s first comprehensive government regulation of IVF. As of 2020, nearly five percent of Australian babies are conceived through IVF. By the time the story is set, then, IVF would already have been a fairly common treatment—though Anthony humorously notes that “conception enhancement” sounds more like the Scientology religion than medicine to him.

Other Books Related to Static

“Static” is part of Cate Kennedy’s short story compilation Like a House on Fire. It’s similar to “Flexion” and “Ashes” (two other stories in the collection), in that each features a protagonist who feels stifled and alienated as they quietly suffer with a troubled marriage and/or a strained family dynamic. Acclaimed short story writer Raymond Carver’s body of work is also similar to Kennedy’s, as both writers gravitate toward themes like loneliness and grief, the simultaneous pain and joy of family relationships, and the mysterious nature of love. Kennedy has also cited Anton Chekov (“Gooseberries”), often hailed as the creator as the modern short story, as an influence on her own writing. Contemporary short story writer Jhumpa Lahiri (Interpreter of Maladies) is another inspiration of hers, and well as Roald Dahl (Matilda), whose storytelling she greatly admired.
Key Facts about Static

On the Job. Cate Kennedy once worked for the Australian Customs Service, which inspired her short story “Habit,” about a protagonist who devises a scheme to smuggle cocaine into the country. 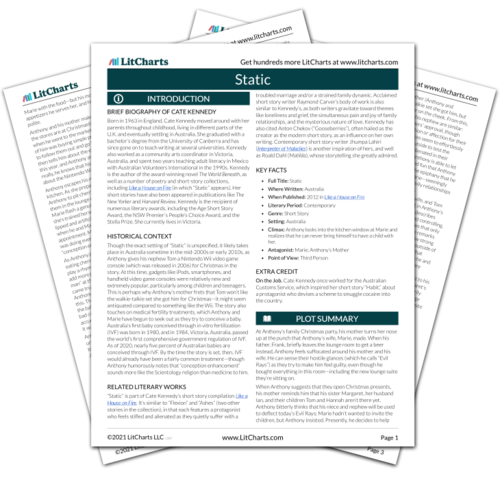 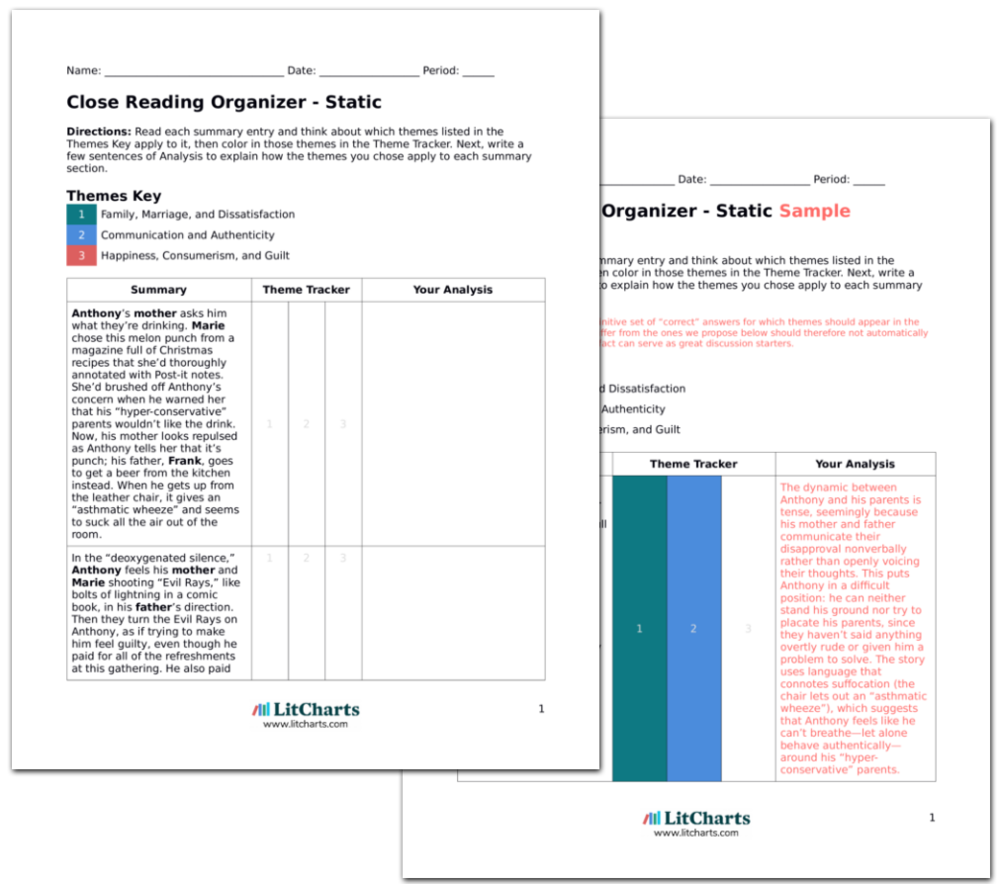