Download this LitChart! (PDF)
Teachers and parents! Struggling with distance learning? Our Teacher Edition on Talking to Strangers can help.

Welcome to the LitCharts study guide on Malcolm Gladwell's Talking to Strangers. Created by the original team behind SparkNotes, LitCharts are the world's best literature guides.

A concise biography of Malcolm Gladwell plus historical and literary context for Talking to Strangers.

A quick-reference summary: Talking to Strangers on a single page.

In-depth summary and analysis of every chapter of Talking to Strangers. Visual theme-tracking, too.

Explanations, analysis, and visualizations of Talking to Strangers's themes.

Description, analysis, and timelines for Talking to Strangers's characters.

Description, analysis, and timelines for Talking to Strangers's terms.

Explanations of Talking to Strangers's symbols, and tracking of where they appear.

An interactive data visualization of Talking to Strangers's plot and themes.

Malcolm Gladwell is a Canadian journalist, author, and public speaker. He was born in England to Joyce Gladwell, a Jamaican psychotherapist, and Graham Gladwell, an English mathematics professor. Gladwell’s family relocated to Ontario, Canada, when he was six. He studied at the University of Toronto and graduated in 1984, after which he took a job writing for conservative magazine The American Spectator. Gladwell moved to the Washington Post in 1987, where he covered business and science. In 1996, he took a job at the New Yorker and has worked there ever since. At the New Yorker, Gladwell honed his quintessential writing style of adapting complex research to be easily digestible and entertaining for the average reader. Two of Gladwell’s early New Yorker articles, “The Tipping Point” and “The Coolhunt,” both written in 1996, would become the basis for his first book, The Tipping Point. Published in 2000, The Tipping Point saw enormous success and secured Gladwell’s status as an in-demand public speaker. Gladwell’s other successful books include Blink (2005) and Outliers (2008). In addition to his continued work at the New Yorker, Gladwell is the host of the podcast Revisionist History, which began in 2016 and has published six seasons to date.
Get the entire Talking to Strangers LitChart as a printable PDF.
"My students can't get enough of your charts and their results have gone through the roof." -Graham S.
Download 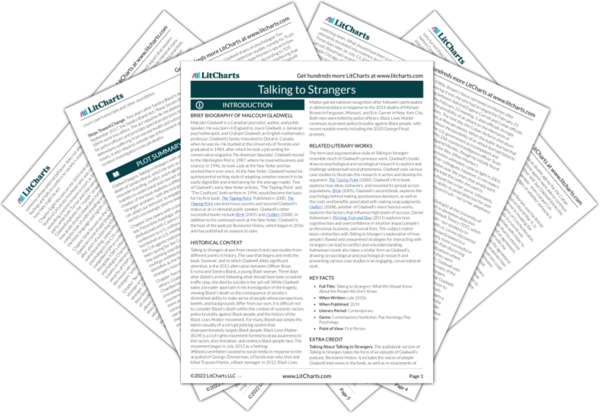 Historical Context of Talking to Strangers

Talking to Strangers draws from research and case studies from different points in history. The case that begins and ends the book, however, and to which Gladwell allots significant attention, is the 2015 altercation between Officer Brian Encinia and Sandra Bland, a young Black woman. Three days after Bland’s arrest following what should have been a routine traffic stop, she died by suicide in her jail cell. While Gladwell takes a broader approach in his investigation of the tragedy, viewing Bland’s death as the consequence of society’s diminished ability to make sense of people whose perspectives, beliefs, and backgrounds differ from our own, it is difficult not to consider Bland’s death within the context of systemic racism, police brutality against Black people, and the history of the Black Lives Matter movement. For many, Bland was simply the latest casualty of a corrupt policing system that disproportionately targets Black people. Black Lives Matter (BLM) is a civil rights movement formed to draw awareness to the racism, discrimination, and violence Black people face. The movement began in July 2013 as a hashtag (#BlackLivesMatter) posted to social media in response to the acquittal of George Zimmerman, a Florida man who shot and killed Trayvon Martin, a Black teenager, in 2012. Black Lives Matter gained national recognition after followers participated in demonstrations in response to the 2014 deaths of Michael Brown in Ferguson, Missouri, and Eric Garner in New York City. Both men were killed by police officers. Black Lives Matter continues to protest police brutality against Black people, with recent notable events including the 2020 George Floyd protests.

Other Books Related to Talking to Strangers

The form and argumentative style of Talking to Strangers resemble much of Gladwell’s previous work. Gladwell’s books draw on psychological and sociological research to explore and challenge widespread social phenomena. Gladwell uses various case studies to illustrate this research in action and develop his argument. The Tipping Point (2000), Gladwell’s first book, explores how ideas, behaviors, and movements spread across populations. Blink (2005), Gladwell’s second book, explores the psychology behind making spontaneous decisions, as well as the costs and benefits associated with making snap judgments. Outliers (2008), another of Gladwell’s more famous works, explores the factors that influence high levels of success. Daniel Kahneman’s Thinking, Fast and Slow (2011) explores how cognitive bias and overconfidence in intuition impact people’s professional, business, and social lives. This subject matter bears similarities with Talking to Strangers’s exploration of how people’s flawed and unexamined strategies for interacting with strangers can lead to conflict and misunderstanding. Kahneman’s book also takes a similar form as Gladwell’s, drawing on sociological and psychological research and presenting various case studies in an engaging, conversational style.
Key Facts about Talking to Strangers

Extra Credit for Talking to Strangers

Talking About Talking to Strangers. The audiobook version of Talking to Strangers takes the form of an episode of Gladwell’s podcast, Revisionist History. It includes the voices of people Gladwell interviews in the book, as well as re-enactments of court case transcripts and other soundbites. 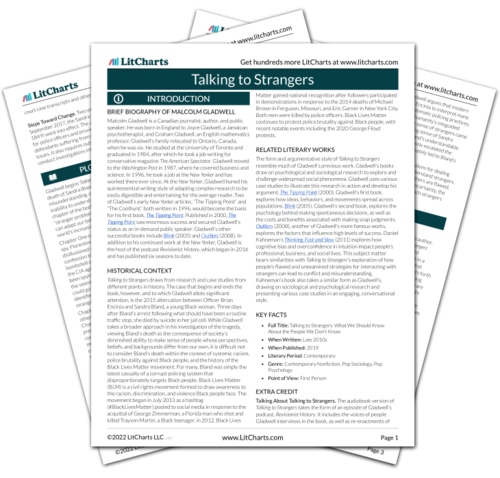 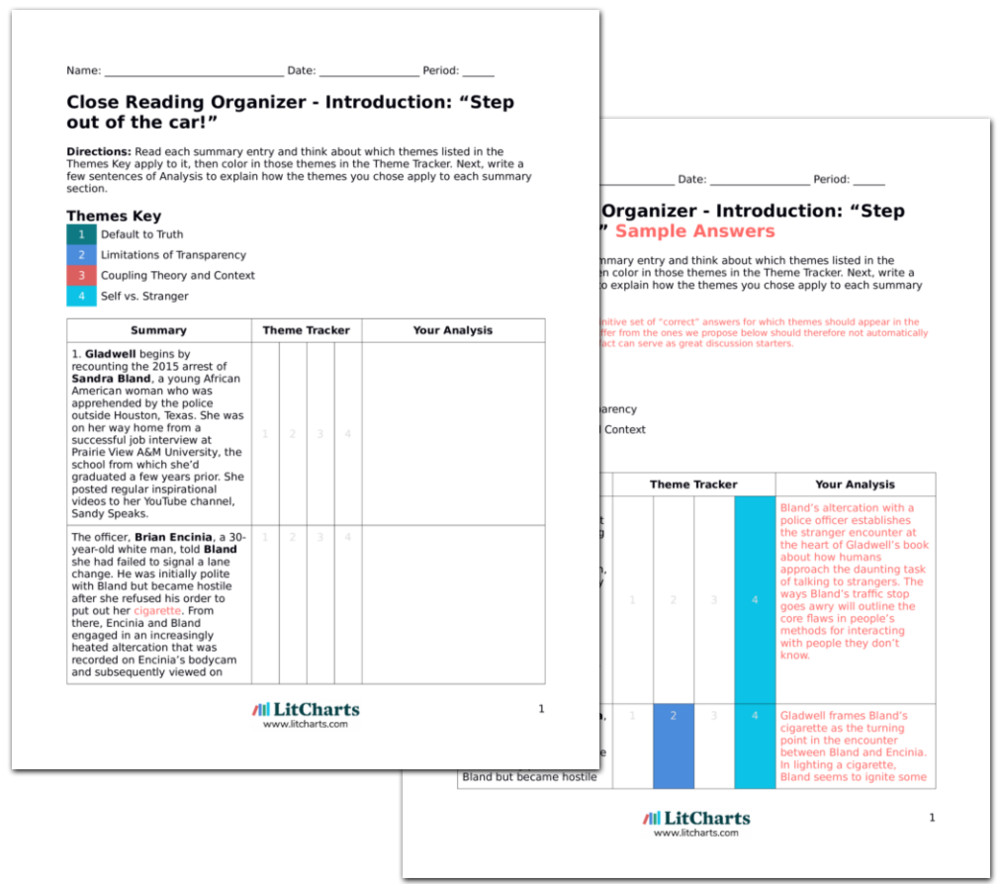