Welcome to the LitCharts study guide on Michael Lewis's The Big Short. Created by the original team behind SparkNotes, LitCharts are the world's best literature guides.

A concise biography of Michael Lewis plus historical and literary context for The Big Short.

A quick-reference summary: The Big Short on a single page.

In-depth summary and analysis of every chapter of The Big Short. Visual theme-tracking, too.

Explanations, analysis, and visualizations of The Big Short's themes.

Description, analysis, and timelines for The Big Short's characters.

Description, analysis, and timelines for The Big Short's terms.

Explanations of The Big Short's symbols, and tracking of where they appear.

An interactive data visualization of The Big Short's plot and themes.

Michael Lewis was born in New Orleans to a corporate attorney and a community activist. After getting an MA in economics from the London School of Economics in 1985, he worked briefly as a trader at Salomon Brothers, which was at the time the most profitable firm on Wall Street, run by the “King of Wall Street” himself, John Gutfreund. It was there that he discovered journalism, though industry publications like The Economist and The Wall Street Journal. Though Lewis found elements of Wall Street fascinating, his first book, Liar’s Poker, was ultimately critical of the risky, cutthroat culture he observed at Salomon Brothers. Liar’s Poker launched Lewis’s career as a writer, and in the years since, he has continued to write best-selling books about finance, statistics, and sports, including The Blind Side, Moneyball, The Big Short, and the Fifth Risk.
Get the entire The Big Short LitChart as a printable PDF.
"My students can't get enough of your charts and their results have gone through the roof." -Graham S.
Download 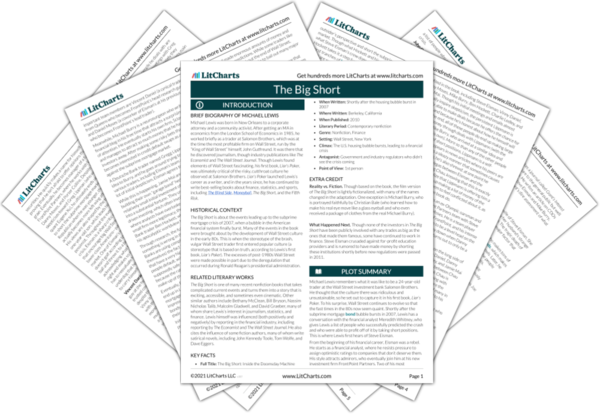 Historical Context of The Big Short

The Big Short is about the events leading up to the subprime mortgage crisis of 2007, when a bubble in the American financial system finally burst. Many of the events in the book were brought about by the development of Wall Street culture in the early 80s. This is when the stereotype of the brash, vulgar Wall Street trader first entered popular culture (a stereotype that is based on truth, according to Lewis’s first book, Liar’s Poker). The excesses of post-1980s Wall Street were made possible in part due to the deregulation that occurred during Ronald Reagan’s presidential administration.

Other Books Related to The Big Short

The Big Short is one of many recent nonfiction books that takes complicated current events and turns them into a story that is exciting, accessible, and sometimes even cinematic. Other similar authors include Bethany McClean, Bill Bryson, Nassim Nicholas Talib, Malcolm Gladwell, and David Graeber, many of whom share Lewis’s interest in journalism, statistics, and finance. Lewis himself was influenced (both positively and negatively) by reporting in the financial industry, including reporting by The Economist and The Wall Street Journal. He also cites the influence of some fiction authors, many of whom write satirical novels, including John Kennedy Toole, Tom Wolfe, and Dave Eggers.
Key Facts about The Big Short

Extra Credit for The Big Short

Reality vs. Fiction. Though based on the book, the film version of The Big Short is lightly fictionalized, with many of the names changed in the adaptation. One exception is Michael Burry, who is portrayed faithfully by Christian Bale (who learned how to make his real eye move like a glass eyeball and who even received a package of clothes from the real Michael Burry).

What Happened Next. Though none of the investors in The Big Short have been publicly involved with any trades as big as the ones that made them famous, some have continued to work in finance. Steve Eisman crusaded against for-profit education providers and is rumored to have made money by shorting these institutions shortly before new regulations were passed in 2011. 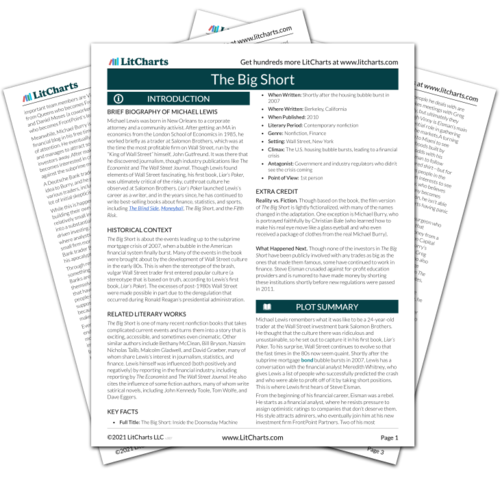 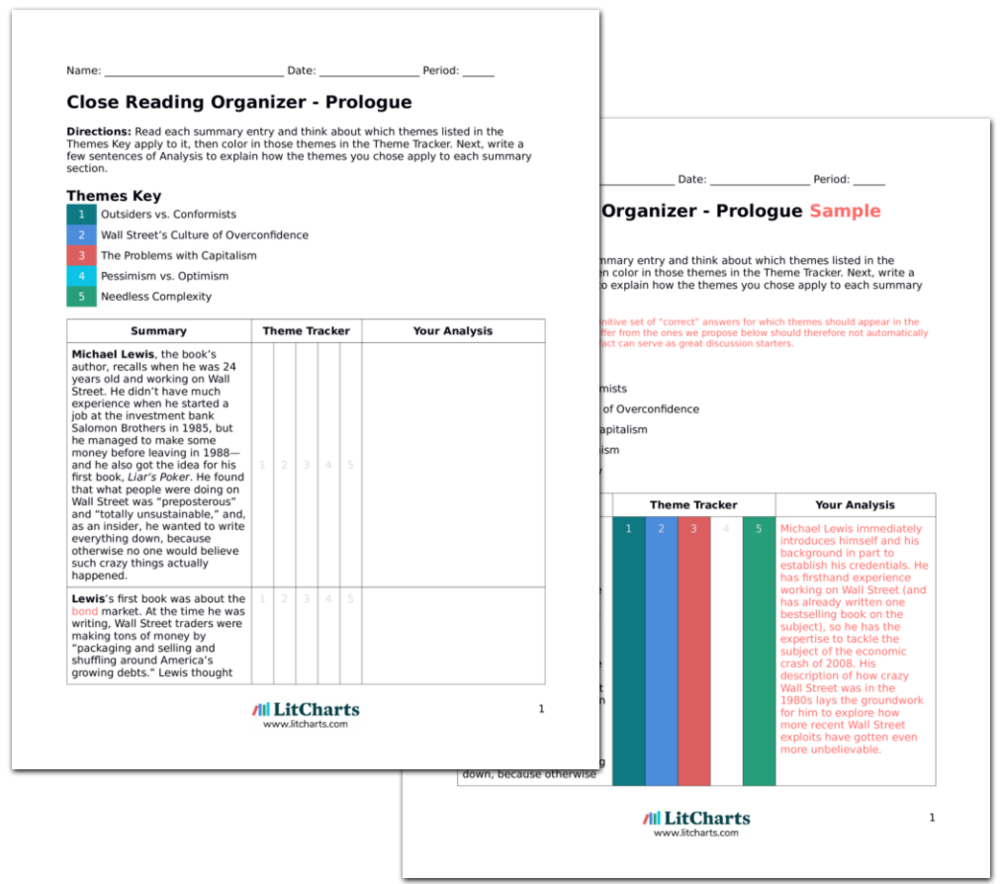