The Blazing World
Introduction + Context
Plot Summary
Detailed Summary & Analysis
To the Reader Part 1 Part 2 Epilogue
Themes
All Themes Fiction, Fancy, and Utopia Gender Hierarchy and Women’s Freedom Monarchy and Government Philosophy, Science, and Religion Love and Friendship
Quotes
Characters
All Characters The Empress The Emperor The Duchess Margaret Cavendish The Duke of Newcastle The King of ESFI The Bear-Men The Bird-Men The Fish-Men The Worm-Men The Satyrs The Immaterial Spirits Fortune
Terms
All Terms Cabbala Platonic Love/Friendship
Symbols
All Symbols Fire, Blazes, and Light

Download this LitChart! (PDF)
Teachers and parents! Struggling with distance learning? Our Teacher Edition on The Blazing World can help.

Welcome to the LitCharts study guide on Margaret Cavendish's The Blazing World. Created by the original team behind SparkNotes, LitCharts are the world's best literature guides.

A concise biography of Margaret Cavendish plus historical and literary context for The Blazing World.

A quick-reference summary: The Blazing World on a single page.

In-depth summary and analysis of every chapter of The Blazing World. Visual theme-tracking, too.

Explanations, analysis, and visualizations of The Blazing World's themes.

Description, analysis, and timelines for The Blazing World's characters.

Description, analysis, and timelines for The Blazing World's terms.

Explanations of The Blazing World's symbols, and tracking of where they appear.

An interactive data visualization of The Blazing World's plot and themes.

Margaret Cavendish was born to a prominent English aristocratic family. Because she was a girl, she did not receive the same intensive, wide-ranging education as her brothers. However, from a young age, she constantly read from her family’s extensive library and talked about academic topics with her older brother John. She joined Queen Henrietta Maria’s court as a maid of honor in 1643, and in 1644, she followed the queen into exile in France. Just one year later, she married the extremely wealthy and influential Duke of Newcastle, William Cavendish, who was also exiled in France. While they were more than 30 years apart in age and never had children, the Duke and Duchess had a deep, loving, and mutually supportive relationship. In fact, the Duke introduced the Duchess to numerous prominent philosophers, including Thomas Hobbes and René Descartes, and the Duke and Duchess frequently collaborated on and edited one another’s writing. The Duke dedicated most of his time to breeding horses, fighting for the English monarchy, and financially supporting artists and philosophers—including his wife. For 15 years, the Cavendishes lived in Paris, Rotterdam, and Antwerp. Cavendish dedicated much of her time to writing on a wide variety of topics, in a wide variety of genres. She published her first book, Poems and Fancies, in 1653. When King Charles II was restored to the throne in 1660, the Cavendishes could return to England, but the Duke found his fortune substantially diminished—by the equivalent of up to a hundred million pounds in today’s money. Still, as Cavendish explains in The Blazing World, she and her husband managed to live a relatively comfortable life. She published most of her work between 1662 and 1668, and she always insisted on publishing her books in her own name, which was extremely unusual in the 17th century. Many readers even thought that Cavendish’s husband had written her books because they didn’t believe that a woman could produce work so sophisticated. Similarly, although Cavendish was famously the first woman ever invited to the Royal Society of London, a prominent scientific society, the male scientists generally shunned and ignored her. In fact, throughout her life, she was often called “Mad Madge” because of her rambling writings and marked, eccentric sense of style. However, since the 1920s, readers and critics have started to take her work more seriously and even treat her as an important early feminist icon. She died in 1673 and is buried in Westminster Abbey.
Get the entire The Blazing World LitChart as a printable PDF.
"My students can't get enough of your charts and their results have gone through the roof." -Graham S.
Download 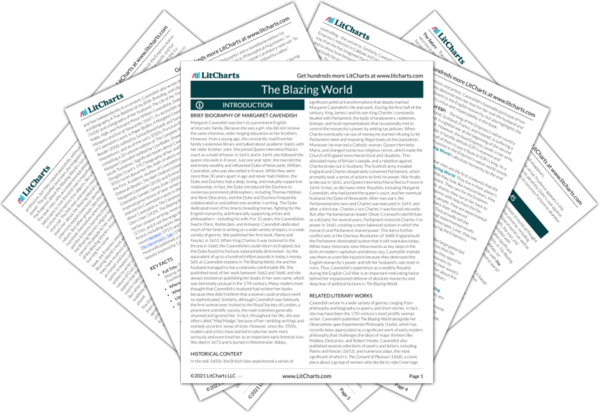 Historical Context of The Blazing World

In the mid-1600s, the British Isles experienced a series of significant political transformations that deeply marked Margaret Cavendish’s life and work. During the first half of the century, King James I and his son King Charles I constantly feuded with Parliament, the body of landowners, noblemen, bishops, and local representatives that occasionally met to control the monarchy’s power by setting tax policies. When Charles eventually ran out of money, he started refusing to let Parliament meet and imposing illegal taxes on the population. Moreover, he married a Catholic woman, Queen Henrietta Maria, and changed numerous religious norms, which made the Church of England more hierarchical and ritualistic. This alienated many of Britain’s people, and a rebellion against Charles broke out in Scotland. The Scottish army invaded England and Charles desperately convened Parliament, which promptly took a series of actions to limit his power. War finally broke out in 1642, and Queen Henrietta Maria fled to France in 1644. In fact, so did many other Royalists, including Margaret Cavendish, who had joined the queen’s court, and her eventual husband, the Duke of Newcastle. After two wars, the Parliamentarians won and Charles was executed in 1649, and after a third war, Charles’s son Charles II was forced into exile. But after Parliamentarian leader Oliver Cromwell ruled Britain as a dictator for several years, Parliament restored Charles II to power in 1660, creating a more balanced system in which the monarch and Parliament shared power. This led to further conflict and, in the Glorious Revolution of 1688, England built the Parliament-dominated system that it still maintains today. While many historians view these events as key steps in the birth of modern capitalism and democracy, Cavendish instead saw them as a terrible injustice because they destroyed the English monarchy’s power and left her husband’s vast state in ruins. Thus, Cavendish’s experience as a wealthy Royalist during the English Civil War is an important motivating factor behind her impassioned defense of absolute monarchy and deep fear of political factions in The Blazing World.

Other Books Related to The Blazing World

Cavendish wrote in a wide variety of genres, ranging from philosophy and biography to poetry and short stories. In fact, she may have been the 17th century’s most prolific woman writer. Cavendish published The Blazing World alongside her Observations upon Experimental Philosophy (1666), which has recently been appreciated as a significant work of early modern philosophy that challenges the ideas of major thinkers like Hobbes, Descartes, and Robert Hooke. Cavendish also published several collections of poetry and letters, including Poems and Fancies (1653), and numerous plays, the most significant of which is The Convent of Pleasure (1668), a comic piece about a group of women who decide to reject marriage and live independently in a convent. Cavendish also wrote the autobiography A True Relation of my Birth, Breeding, and Life (1656) and a biography of her husband, The Life of the Thrice Noble, High, and Puissant Prince William Cavendishe, Duke Marquess and Earl of Newcastle (1667). An accessible anthology of Cavendish’s work is Paper Bodies: A Margaret Cavendish Reader (2000, edited by Sylvia Bowerbank and Sara Mendelson), and as of the early 2020s, Punctum Books is also compiling a 20-volume edition of The Complete Works of Margaret Cavendish (edited by Liza Blake, Shawn Moore, and Jacob Tootalian). Significant books about Cavendish include Douglas Grant’s 1957 biography of her and Danielle Dutton’s 2016 novel about her life, both of which are entitled Margaret the First. Academic studies of Cavendish’s work include Deborah Boyle’s The Well-Ordered Universe: The Philosophy of Margaret Cavendish (2018) and Emma Rees’s Margaret Cavendish: Gender, Genre, Exile (2004). Cavendish has also inspired generations of later writers. Virginia Woolf helped popularize Cavendish’s work in the 20th century by writing about Cavendish in The Common Reader (1925) and A Room of One’s Own (1929). The Blazing World was heavily inspired by earlier utopian writing, most notably Thomas More’s Utopia (1516), and it set the stage for much later feminist science fiction, including works like Charlotte Perkins Gilman’s utopian novel Herland (1915) and Margaret Atwood’s dystopian novel The Handmaid’s Tale (1985). In 2014, American novelist Siri Hustvedt published a novel entitled The Blazing World, which is loosely inspired by Cavendish’s life and work.
Key Facts about The Blazing World

Extra Credit for The Blazing World

Editions and Audiences. Cavendish published The Blazing World on two separate occasions, in 1666 and 1668, and each time, she published both a combined edition (with Observations upon Experimental Philosophy) and a standalone edition for “ladies [who] take no delight in Philosophical Arguments.” In these editions, she addressed the book’s prefatory note not “To the Reader,” but rather “To all Noble and Worthy Ladies.”

Feminist Trailblazing. Cavendish was largely ignored during her lifetime and forgotten until major feminist writers rediscovered her writings in the 20th century. Today, she is receiving more and more scholarly attention, as organizations like the Margaret Cavendish Society and Digital Cavendish Project work to catalogue, analyze, and promote her work. In fact, the actress Carlson Young has written, directed, and starred in two films entitled The Blazing World and based on Cavendish’s work. 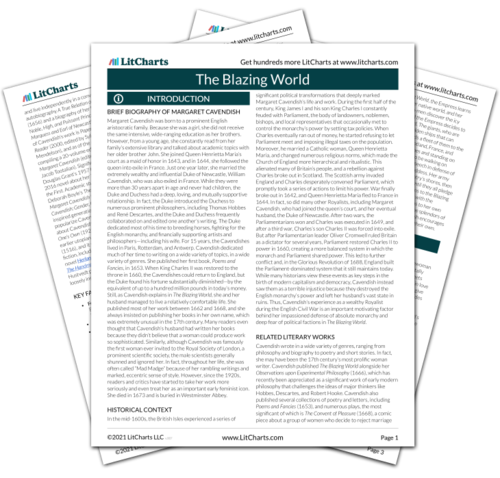 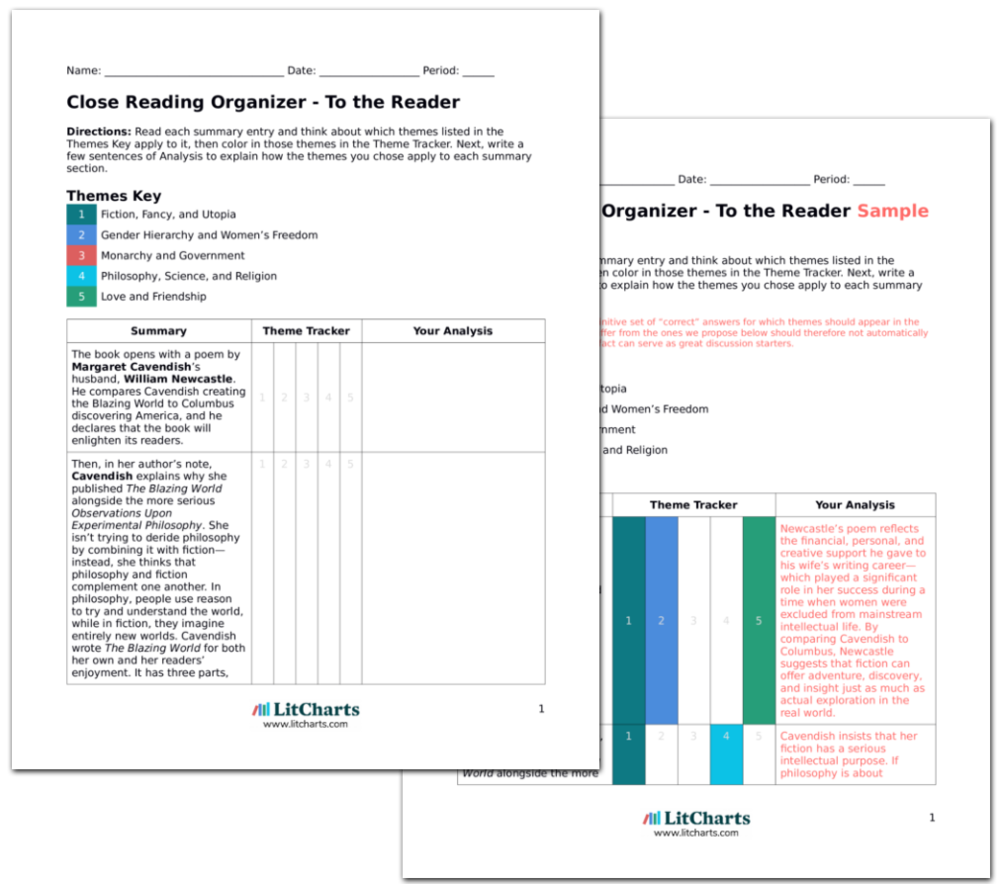