Aegeon is a merchant from Syracuse, who has traveled to the city of Ephesus. The two cities are in a feud, and the Duke of Ephesus, Solinus, has made a decree that anyone from Syracuse found in Ephesus will pay a 1000 mark fine or be executed. Aegeon does not have enough money for the fine, so Solinus prepares to execute him. First, though, he wants to hear what has brought Aegeon to Ephesus. Aegeon explains that he and his wife had twin sons, and had another pair of twins as servants for their sons. They were all on a ship during a big storm, and suffered a shipwreck. Aegeon took one son and one servant, and tied himself to a mast for safety. His wife did the same. The ship broke in two, and Aegeon and his wife were rescued by two separate groups of sailors who went off in two different directions. Years later, Aegeon’s son left Syracuse to find his long-lost twin brother and mother, and Aegeon followed suit, eventually coming to Ephesus in his quest to find his wife and sons. Solinus takes (some) pity on Aegeon and says that he will give him 24 hours to find someone to pay his fine. Otherwise, Aegeon will be executed.

Elsewhere in Ephesus, Aegeon’s son Antipholus of Syracuse has recently arrived with his servant Dromio. He sends Dromio to the inn where they are staying with his money and promises to meet him after doing business with some merchants. Dromio leaves, and then the servant of Antipholus’ lost brother, Dromio of Ephesus (the twin of Dromio of Syracuse) arrives and tells Antipholus (whom he mistakes for his twin, Antipholus of Ephesus) to come home for dinner. Antipholus is confused and asks about his money. Dromio says he doesn’t know what Antipholus is talking about, and Antipholus beats him. He says that he has heard of sorcerers and witches inhabiting Ephesus and concludes that some magician is controlling Dromio, making him act strangely.

At the house of Antipholus of Ephesus (the lost twin of Antipholus of Syracuse), his wife Adriana talks with her sister Luciana, upset that neither her husband nor her servant Dromio have returned. Luciana tells her to wait patiently for her husband, and advises her to cede to her husband’s authority and will. Dromio of Ephesus enters and tells Adriana that Antipholus would not come home, claimed not to know her, and talked only about money. Adriana thinks that her husband is having an affair, and this is why he won’t come home for dinner.

Antipholus of Syracuse runs into Dromio of Syracuse in the street and asks what he was talking about earlier (confusing him with Dromio of Ephesus). Dromio is confused and says he hasn’t seen his master since he was sent to the inn. Antipholus beats Dromio in frustration. Luciana and Adriana enter, and Luciana scolds Antipholus for treating his wife poorly. Antipholus says he doesn’t know who either of these women are. Dromio guesses that they are “goblins, owls, and sprites.” Antipholus decides to play along with Adriana and go back to her home for dinner. They all go inside Adriana’s house, leaving Dromio to watch the door and not let anyone in to disturb the meal.

Nearby this house, Antipholus of Ephesus is talking with his servant, Dromio of Ephesus, a goldsmith named Angelo, and a merchant named Balthazar. He tells Angelo that he must go to dinner with his wife and tells him to bring a gold necklace he has ordered to his house later. Dromio insists that Antipholus previously denied the existence of his wife, beat him, and asked him about money, but Antipholus denies that he did any of it. He invites Balthazar to dinner, and they go to the door of his house. When he knocks, though, Dromio of Syracuse refuses to let them enter. He says his name is Dromio, and Dromio of Ephesus thinks that someone has tried to steal his identity. Antipholus of Ephesus threatens to break down the door, but Balthazar cautions him against this, saying it might spread gossip about the state of his marriage. Antipholus agrees and suggests they go to have dinner with a courtesan he knows instead.

Later in the day, a merchant confronts Angelo about money that he owes him. Angelo says that he is expecting payment for a necklace from Antipholus, and will use this money to pay the merchant back. Antipholus of Ephesus then enters with Dromio of Ephesus. He tells Dromio to go buy a rope, which he will give to his wife. Angelo asks for his payment, but Antipholus insists that he has not yet received the chain. Angelo and the merchant have an officer arrest Antipholus. Dromio of Syracuse then enters and tells Antipholus that there is a ship leaving Ephesus soon. Antipholus is confused and tells Dromio to go get money from Adriana for his bail.

Back at Antipholus’ house, Adriana is discussing her husband with Luciana, who tells her about how Antipholus denied his marriage and tried to woo Luciana. Dromio of Syracuse enters and says that Antipholus has been arrested. Adriana gives him money for Antipholus’ bail. Dromio goes to find Antipholus, and runs into Antipholus of Syracuse in the street. He gives him the gold, much to Antipholus’ confusion. He asks how Antipholus got out of prison, and Antipholus tells him to stop fooling around. He says that all of this confusion must be the result of sorcerers in Ephesus. A courtesan enters and asks Antipholus if he has the gold chain he has promised her in return for her diamond ring. Antipholus and Dromio think she is a witch, call her “Mistress Satan,” and tell her to leave. The courtesan says that she has heard Antipholus has gone mad, and now knows it to be true. She plans to go to Adriana.

Meanwhile, Antipholus of Ephesus is still under arrest. Dromio of Ephesus finds him, and he asks if Dromio has the bail money. Dromio is confused, and says he has the rope he was sent for. Antipholus is furious and beats Dromio. Adriana, Luciana, the courtesan enter with a “conjurer” named Pinch. Adriana thinks that Antipholus and Dromio are mad and possessed, and asks Pinch to try to perform an exorcism on them. Antipholus threatens to tear out Adriana’s eyes, and Pinch ties Dromio and him up, planning to lock them in a dark room until they come to their senses. He takes them away. The courtesan says that Antipholus took a diamond ring from her and promised her a gold chain, but has not given it to her. Just then, Antipholus of Syracuse and Dromio of Syracuse enter, with their swords drawn. They chase all the women away, thinking they are witches. Antipholus wants to leave Ephesus immediately.

Angelo apologizes to the merchant for making him wait for the money he is owed. Just then, Antipholus of Syracuse and Dromio of Syracuse enters. Antipholus is wearing the gold chain, and Angelo asks how he could deny that he received the necklace. Antipholus says he never denied it. The merchant swears that Antipholus did deny this, and the two prepare to duel. Just then, Adriana enters with Luciana and the courtesan. Adriana says that Antipholus is mad and asks for help in tying up Antipholus and Dromio. The two men flee to a nearby abbey, and the abbess comes out to see what is going on. Adriana explains that her husband is mad, but the abbess refuses to let anyone into the abbey. She asks what has befallen Antipholus to make him mad, and Adriana says it might be that he has become unfaithful. The abbess blames Adriana for this—first for not scolding her husband, then for scolding him too much about possible infidelity. The Duke enters with Aegeon, preparing to execute him, and Adriana asks the Duke also for justice against the abbess. She explains what has happened with her husband, and the Duke sends for the abbess. A servant comes from Adriana’s house and tells her that Antipholus and Dromio have escaped and attacked Pinch. Adriana says this cannot be true, as Antipholus and Dromio are in the abbey. Antipholus and Dromio of Ephesus arrive, and Antipholus asks the Duke for justice. Aegeon says he recognizes Antipholus as his son, but no one pays attention to him as Antipholus tells the Duke what has happened to him earlier in the day: he was locked out of his own house, then Angelo failed to deliver the gold necklace he promised him, then he was falsely arrested, then Dromio failed to bring him the bail money, and then he was tied up and thrown in a dark room by Pinch. He and Dromio had to gnaw the ropes that tied them up in order to escape. Adriana and Luciana deny locking Antipholus out of the house, though Angelo says he witnessed this. He says he did give Antipholus the gold chain, and the merchant agrees. Aegeon interrupts to say that Antipholus is his son, but Antipholus says he doesn’t know who Aegeon is.

Finally, the abbess enters with Antipholus and Dromio of Syracuse, who recognize Aegeon. The abbess also recognizes Aegeon, and identifies herself as Aemilia, his long-lost wife. She explains that she was separated from Antipholus and Dromio of Ephesus after the shipwreck and became an abbess. Everyone clarifies just what has happened during the day with the two Antipholuses and two Dromios. Antipholus of Ephesus offers to use his bail money to pay Aegeon’s fine, but Duke Solinus decides to pardon Aegeon for free. Aemilia suggests everyone come to the abbey to “hear at large discoursed all our fortunes.” Everyone but the two Dromios leaves, and then both Dromios follow them walking side-by-side and hand in hand as brothers. 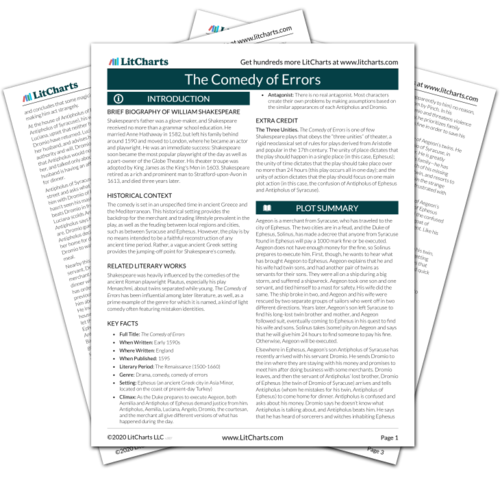 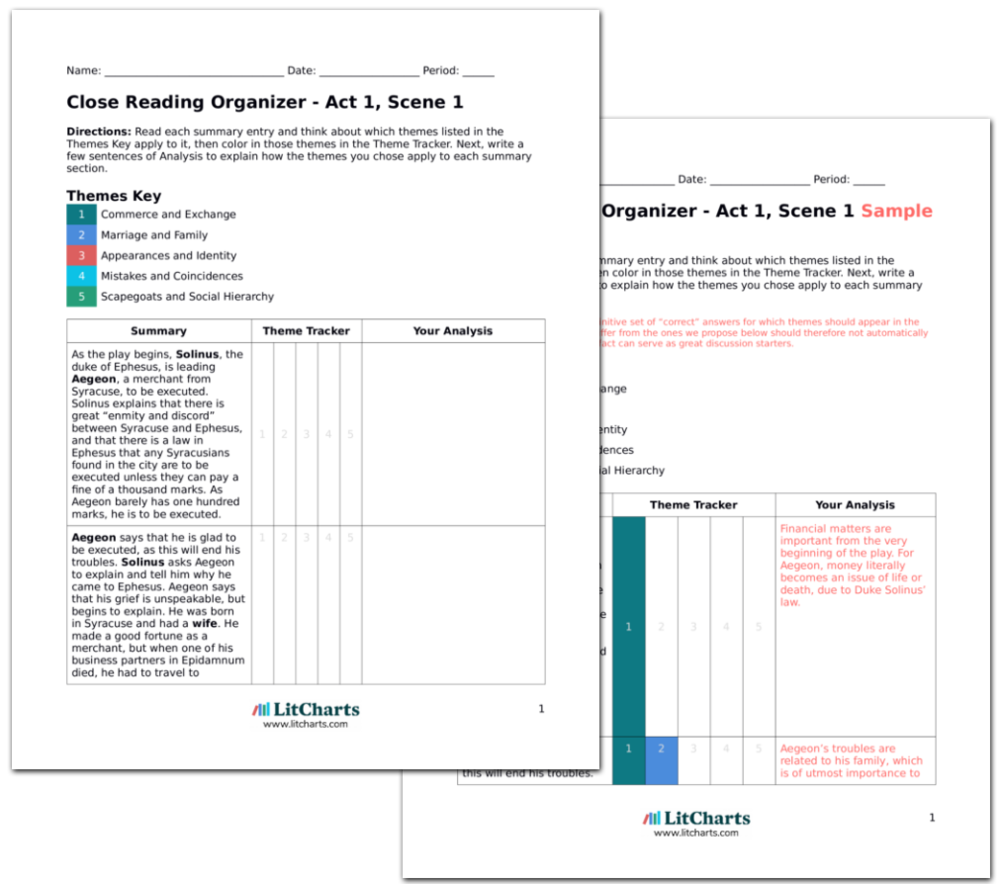 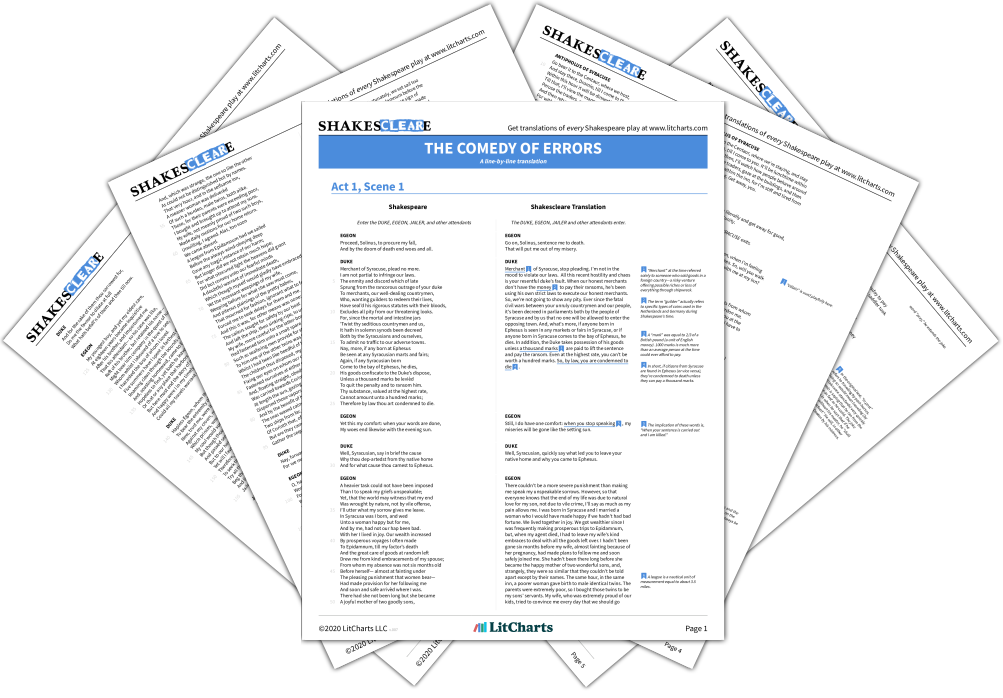