Get LitCharts A+
LitCharts assigns a color and icon to each theme in The Gift of the Magi, which you can use to track the themes throughout the work.

"Gift of the Magi" revolves around a young couple, Della and Jim, who lack a lot in the way of material possessions and external amusements. The beginning of the story focuses on their poverty—the shabby couch, the lack of mirror, the eight-dollar flat, the broken doorbell. Despite this, the narrator adds that Jim always arrives home to be “greatly hugged. Which is all very good.” Their poverty doesn’t seem to affect their cozy home life on a daily basis, and the emotional value of having each other outweighs their lack of material wealth.

The question of material vs. inner value comes up again when Della finds the chain for Jim’s watch, which is “simple and chaste in design” but has value in its substance alone—Della likens this to Jim, who possesses inner value despite having a slight income. In the description of Jim’s watch and Della’s hair, the narrator compares them to King Solomon and the Queen of Sheba—an allusion that describes how much the watch and hair mean to Jim and Della, even if they aren’t truly comparable to an abundance of treasures and jewels, showing that value is subjective. The chatty narrator makes this clear when he says, “Eight dollars a week or a million a year—what is the difference? A mathematician or a wit would give you the wrong answer.”

The ThemeTracker below shows where, and to what degree, the theme of Value appears in each section of The Gift of the Magi. Click or tap on any chapter to read its Summary & Analysis.
How often theme appears:
section length:
Section
The Gift of the Magi
Get the entire The Gift of the Magi LitChart as a printable PDF.
"My students can't get enough of your charts and their results have gone through the roof." -Graham S.
Download 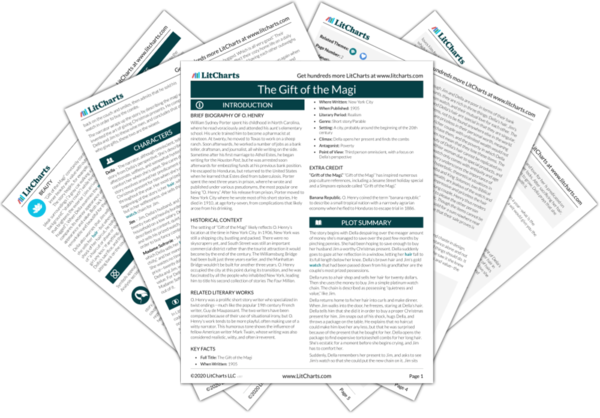 Value Quotes in The Gift of the Magi

The "Dillingham" had been flung to the breeze during a former period of prosperity when its possessor was being paid $30 per week. Now, when the income was shrunk to $20, though, they were thinking seriously of contracting to a modest and unassuming D. But whenever Mr. James Dillingham Young came home and reached his flat above he was called "Jim" and greatly hugged by Mrs. James Dillingham Young, already introduced to you as Della. Which is all very good.

Only $1.87 to buy a present for Jim. Her Jim. Many a happy hour she had spent planning for something nice for him. Something fine and rare and sterling--something just a little bit near to being worthy of the honor of being owned by Jim.

Now, there were two possessions of the James Dillingham Youngs in which they both took a mighty pride. One was Jim's gold watch that had been his father's and his grandfather's. The other was Della's hair. Had the queen of Sheba lived in the flat across the airshaft, Della would have let her hair hang out the window some day to dry just to depreciate Her Majesty's jewels and gifts. Had King Solomon been the janitor, with all his treasures piled up in the basement, Jim would have pulled out his watch every time he passed, just to see him pluck at his beard from envy.

It was a platinum fob chain simple and chaste in design, properly proclaiming its value by substance alone and not by meretricious ornamentation--as all good things should do. It was even worthy of The Watch. As soon as she saw it she knew that it must be Jim's. It was like him. Quietness and value--the description applied to both.

Eight dollars a week or a million a year--what is the difference? A mathematician or a wit would give you the wrong answer.

And here I have lamely related to you the uneventful chronicle of two foolish children in a flat who most unwisely sacrificed for each other the greatest treasures of their house. But in a last word to the wise of these days let it be said that of all who give gifts these two were the wisest. O all who give and receive gifts, such as they are wisest. Everywhere they are wisest. They are the magi.