Download this LitChart! (PDF)
Teachers and parents! Struggling with distance learning? Our Teacher Edition on The Glass Castle can help.

The Glass Castle opens with Jeannette Walls, a successful gossip columnist living on Park Avenue, one of New York City’s most prestigious addresses, in a taxi on the way to a party. Gazing out the window, she catches sight of her mother, Rose Mary Walls, rifling through a dumpster for something to eat.

In the next section, we begin to learn, little by little, the roots of the family’s current situation. Part 2 begins with Jeannette’s earliest memory as a three-year-old in southern Arizona: her dress catches on fire as she cooks hot dogs on the stove on her own. She’s in the hospital for six weeks, even though Mom and Dad are dismissive of modern medicine. In fact, they’re suspicious of any institution—they prefer to be “self-sufficient” rather than follow anyone else’s rules. Jeannette will continue to be fascinated by fire—especially after Dad explains to her its relationship to the balance between order and turbulence in the laws of physics.

Dad is brilliant in math and physics and possesses a sharp engineering acumen, but he prefers to stick to odd jobs rather than submit to the rules of a manager. Mom, in turn, is curious and open-minded, though often considers her children a distraction from her artistic interests. The family never spends more than a few months in one place before Dad announces, usually in the middle of the night, that the family is leaving. The kids—Lori, the oldest, Jeannette, and Brian (Maureen is born later) can only take a few possessions. This makes the kids guard their favorite things closely, like Jeannette’s rock collection.

Mom and Dad are often on the run from bill collectors, and hold some wild conspiracy theories about government corruption. They prefer to live in the most isolated towns in the desert of the American Southwest. Dad makes money playing poker, too, though it never lasts long. While Jeannette is young, she enjoys this lifestyle: she and her siblings are free to explore and rarely enroll in school. Dad regales the kids with stories of his adventures in the Air Force and wrestling enemies around multiple states. He also delights them with the intricate architectural blueprints of the palace he’s planning to built in the desert: the Glass Castle. Dad does drink too much sometimes, but initially this doesn’t seem to hurt anyone, and it’s more than made up for by his enchanting stories.

Things begin to change once the family settles in Battle Mountain, Nevada for almost a year. The kids start to get into trouble—Lori even shoots at a boy, Billy Deel, who’s been rejected by Jeannette and comes to the house with a BB gun in revenge. And Dad spends more and more time out of the house, either at the Owl Club, a bar, or at the Green Lantern, which Jeannette will only later learn is a whorehouse. In order to eat, the kids increasingly have to resort to measures like looking for cans and bottles to sell. Brian and Lori are quicker than Jeannette, who is Dad’s favorite, to lose faith in Dad because of his drinking.

Things start to look up for awhile in Phoenix, where, after Mom’s mother, Grandma Smith, dies, the family moves into her large old house. Dad stops drinking for a few months after Jeannette asks him to do so as her birthday present—but it doesn’t last long, and soon his drinking is worse than ever.

Against Dad’s wishes, Mom decides to move the family to Welch, West Virginia, where he’s from. Jeannette is sorry to leave Phoenix, which is as close to a home as she’s ever known. Welch is an old coal-mining town that has seen far better days, and Erma, Dad’s mom, is cranky and unpleasant, while Jeannette’s Uncle Stanley makes sexual advances towards her. Jeannette’s teachers at school don’t seem to appreciate her intelligence or interest in learning, and the other kids make fun of her for being poor and from elsewhere.

It’s in Welch where the adventurous lifestyle of the Walls family starts to disintegrate into squalor and dysfunction. Dad spends more and more time drinking outside the house, and is almost never home. Mom isn’t interested in finding a way to feed the kids or keep the house clean either, preferring to spend time on her various art projects as Jeannette and her siblings forage for food and fend for themselves. Their house on Little Hobart Street is dank, rotting, and literally falling apart. It lacks electricity or running water. Jeannette’s illusions about her father and her family’s ability to create a better life for itself are almost definitively ruined after she and Brian spend weeks digging a foundation pit for the Glass Castle behind the house—and Dad tells them to fill it with garbage, since they can’t afford the trash collection fee.

After Lori comes back from a government-sponsored summer camp, she and Jeannette realize that they can escape Welch and their dysfunctional family. They begin an escape fund for Lori to move to New York City and start art school, continuing even after Dad steals the money for drinking and gambling. After Lori graduates from high school, she moves and works in a German restaurant in New York while she saves up for school.

Jeannette, meanwhile, has discovered a passion for journalism by working on the school newspaper. After eleventh grade, she joins Lori in New York. She gets an internship and then a job at a newspaper and ends up enrolling in Barnard College, while she and Lori convince Brian to move to New York, and finally bring Maureen as well.

Mom and Dad refuse to really accept that their kids have abandoned them. They call Jeannette one day a few years after her move to announce that they’ve moved to New York as well, so that the whole family can live together. While Lori and Brian allow their parents to live with them for awhile, Dad’s drinking and Mom’s hoarding habits become too much. As usual, Mom and Dad have too much trouble submitting to anyone’s authority for too long. In New York, this means that before long, they’re homeless—and refuse to accept the kids’ help.

Jeannette graduates from Barnard, gets a job at a magazine, and moves in with her rich boyfriend Eric on Park Avenue. Meanwhile, her own parents are thrilled to have found a tenement where they can squat on the Lower East Side. It takes time, but Jeannette slowly comes to understand that home can mean different things for different people. Dad’s death, ultimately, helps her to understand that though she’s “escaped” from her past, she hasn’t yet found a home where she belongs herself—she divorces Eric and moves out of Park Avenue. The memoir ends with a flash-forward to five years later, when she’s happily married to a writer and living in a country farmhouse—the first place she’s owned. Mom is, by this time, still in the tenement, but the city is about to sell the plots to the squatters for a dollar each. Jeannette’s attitude toward her parents continues to be deeply ambivalent—they are creative and adventurous but also wildly irresponsible. She has suffered a great deal through her childhood because of them, but her turbulent process of growing up has also shaped her into the person she’s become. 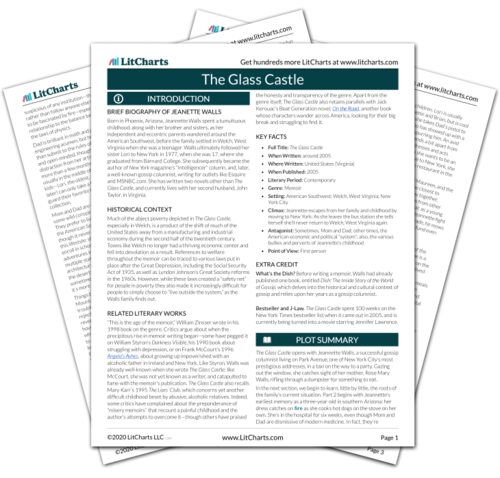 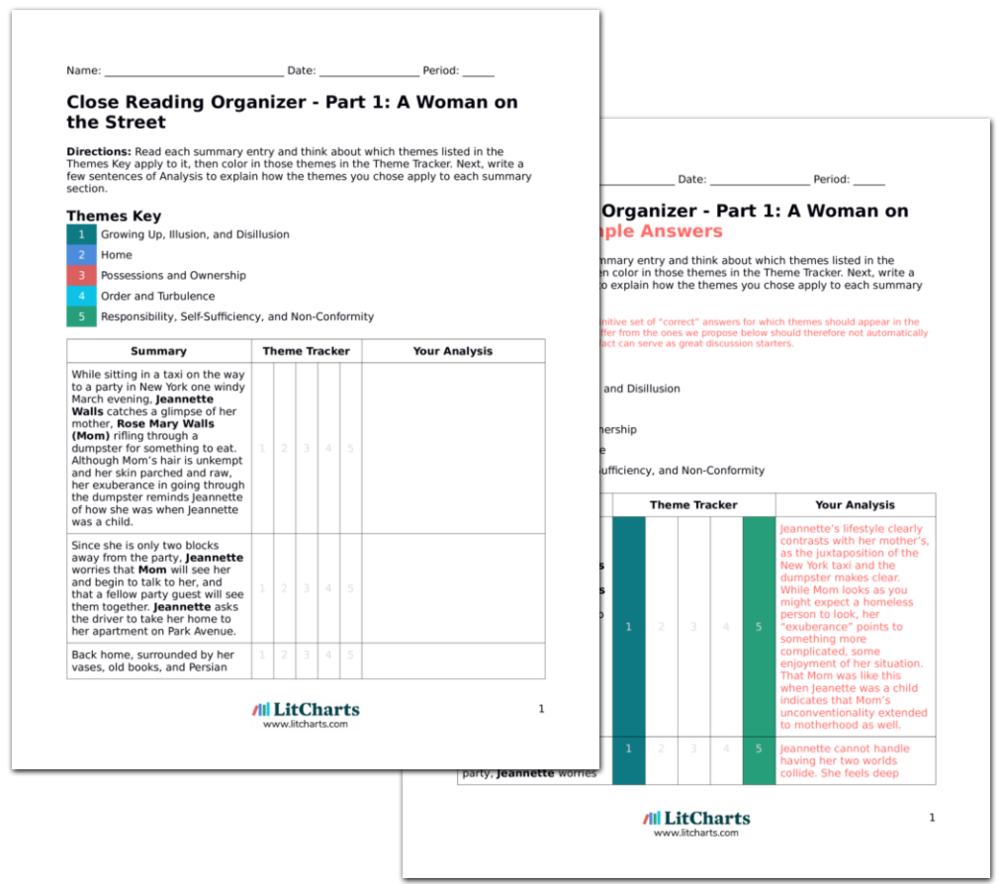