Download this LitChart! (PDF)
Teachers and parents! Struggling with distance learning? Our Teacher Edition on The Golden Ass can help.

Welcome to the LitCharts study guide on Apuleius's The Golden Ass. Created by the original team behind SparkNotes, LitCharts are the world's best literature guides.

A concise biography of Apuleius plus historical and literary context for The Golden Ass.

A quick-reference summary: The Golden Ass on a single page.

In-depth summary and analysis of every book of The Golden Ass. Visual theme-tracking, too.

Explanations, analysis, and visualizations of The Golden Ass's themes.

Description, analysis, and timelines for The Golden Ass's characters.

Explanations of The Golden Ass's symbols, and tracking of where they appear.

An interactive data visualization of The Golden Ass's plot and themes.

Apuleius is best known today as the author of The Golden Ass (also sometimes called the Metamorphoses), the only full-length Latin novel from Roman times that has survived into the present. He was born in Numidia, a Roman province in northern Africa, close to where the later writer and theologian Augustine of Hippo would live. Apuleius’s father was a magistrate, and this gave him a large inheritance, which allowed him to travel widely throughout his life, including to Carthage, Athens, Rome, Egypt, and Asia Minor (modern-day Turkey). Some aspects of Apuleius’s life, including even his first name, are disputed, but in addition to The Golden Ass, he was also well known for giving public speeches and for some of his writings about philosophy, particularly Greeks like Plato and Socrates.
Get the entire The Golden Ass LitChart as a printable PDF.
"My students can't get enough of your charts and their results have gone through the roof." -Graham S.
Download 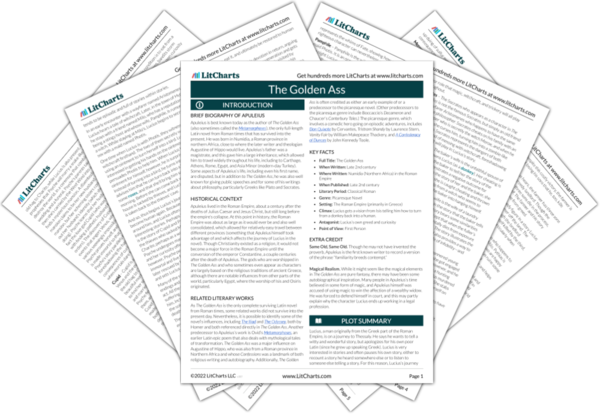 Historical Context of The Golden Ass

Apuleius lived in the Roman Empire, about a century after the deaths of Julius Caesar and Jesus Christ, but still long before the empire’s collapse. At this point in history, the Roman Empire was about as large as it would ever be and also well consolidated, which allowed for relatively easy travel between different provinces (something that Apuleius himself took advantage of and which affects the journey of Lucius in the novel). Though Christianity existed as a religion, it would not become a major force in the Roman Empire until the conversion of the emperor Constantine, a couple centuries after the death of Apuleius. The gods who are worshipped in The Golden Ass and who sometimes even appear as characters are largely based on the religious traditions of ancient Greece, although there are notable influences from other parts of the world, particularly Egypt, where the worship of Isis and Osiris originated.

Other Books Related to The Golden Ass

As The Golden Ass is the only complete surviving Latin novel from Roman times, some related works did not survive into the present day. Nevertheless, it is possible to identify some of the novel’s influences, including The Iliad and The Odyssey, both by Homer and both referenced directly in The Golden Ass. Another predecessor to Apuleius’s work is Ovid’s Metamorphoses, an earlier Latin epic poem that also deals with mythological tales of transformation. The Golden Ass was a major influence on Augustine of Hippo, who was also from a Roman province in Northern Africa and whose Confessions was a landmark of both religious writing and autobiography. Additionally, The Golden Ass is often credited as either an early example of or a predecessor to the picaresque novel. (Other predecessors to the picaresque genre include Boccaccio’s Decameron and Chaucer’s Canterbury Tales.) The picaresque genre, which involves a comedic hero going on episodic adventures, includes Don Quixote by Cervantes, Tristram Shandy by Laurence Stern, Vanity Fair by William Makepeace Thackery, and A Confederacy of Dunces by John Kennedy Toole.
Key Facts about The Golden Ass

Extra Credit for The Golden Ass

Same Old, Same Old. Though he may not have invented the proverb, Apuleius is the first known writer to record a version of the phrase “familiarity breeds contempt.”

Magical Realism. While it might seem like the magical elements in The Golden Ass are pure fantasy, there may have been some autobiographical inspiration. Many people in Apuleius’s time believed in some form of magic, and Apuleius himself was accused of using magic to win the affection of a wealthy widow. He was forced to defend himself in court, and this may partly explain why the character Lucius ends up working in a legal profession. 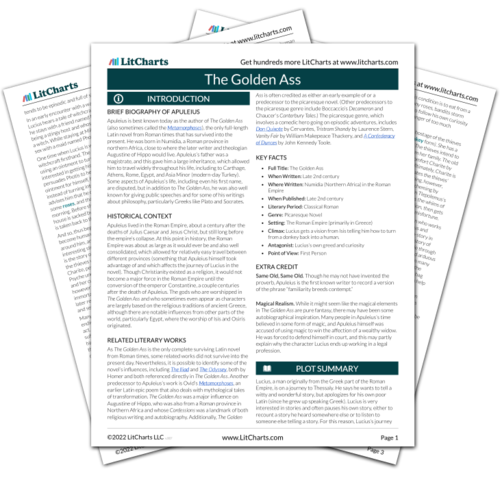 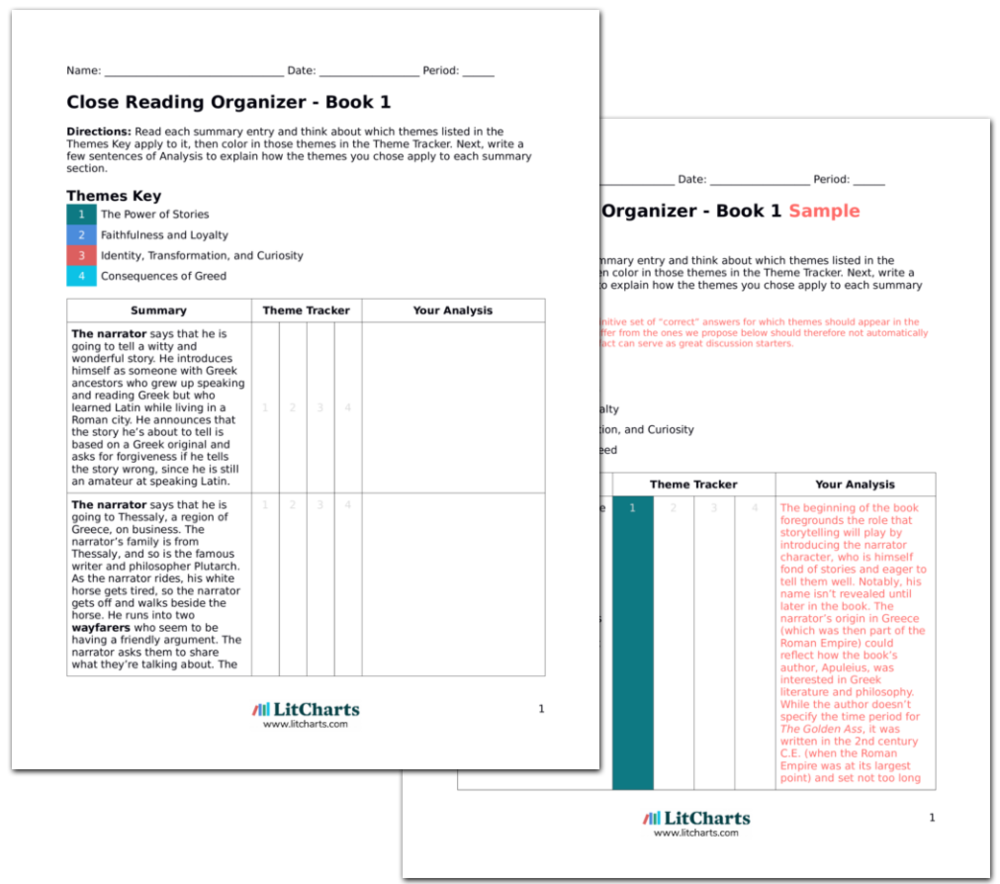