Download this LitChart! (PDF)
Teachers and parents! Struggling with distance learning? Our Teacher Edition on The Secret History can help.

Welcome to the LitCharts study guide on Donna Tartt's The Secret History. Created by the original team behind SparkNotes, LitCharts are the world's best literature guides.

A concise biography of Donna Tartt plus historical and literary context for The Secret History.

A quick-reference summary: The Secret History on a single page.

In-depth summary and analysis of every chapter of The Secret History. Visual theme-tracking, too.

Explanations, analysis, and visualizations of The Secret History's themes.

Description, analysis, and timelines for The Secret History's characters.

Explanations of The Secret History's symbols, and tracking of where they appear.

An interactive data visualization of The Secret History's plot and themes.

Donna Tartt was born and raised in Mississippi, the daughter of a musician and a secretary. Both of Tartt’s parents were voracious readers and instilled in her a lifelong love for books and writing. Tartt started writing at the age of five and had already published a poem in The Mississippi Review by age 13. In 1981, Tartt began attending the University of Mississippi before transferring to Bennington College in 1982. Tartt’s peer group at Bennington is now legendary, as it consisted of fellow authors Johnathan Lethem, Bret Easton Ellis, and Jill Eisenstadt. After college, Tartt split her time between Boston and New York while working on the novel that would eventually become The Secret History. The Secret History was finally published in 1992 to rave reviews, and it turned Tartt into a literary celebrity. Tartt was hailed as a literary genius and her next book was eagerly awaited. However, the follow-up to The Secret History wouldn’t come for another 10 years. Eventually, it arrived in 2002 with the title The Little Friend. Though it is the least popular and acclaimed of Tartt’s novels, The Little Friend was still very successful and well-liked. After The Little Friend’s publication, another decade went by without a new Tartt novel. Then, in 2013, Tartt published The Goldfinch, which is now her best-known and most critically acclaimed novel. The Goldfinch won the Pulitzer Prize for Fiction and was eventually adapted into a film in 2019.
Get the entire The Secret History LitChart as a printable PDF.
"My students can't get enough of your charts and their results have gone through the roof." -Graham S.
Download 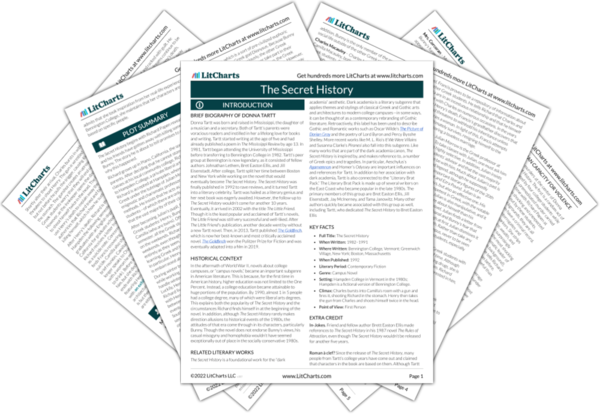 Historical Context of The Secret History

In the aftermath of World War II, novels about college campuses, or “campus novels,” became an important subgenre in American literature. This is because, for the first time in American history, higher education was not limited to the One Percent. Instead, a college education became attainable to huge portions of the population. By 1990, almost 1 in 5 people had a college degree, many of which were liberal arts degrees. This explains both the popularity of The Secret History and the circumstances Richard finds himself in at the beginning of the novel. In addition, although The Secret History rarely makes direct allusions to historical events of the 1980s, the attitudes of that era come through in its characters, particularly Bunny. Though the novel does not endorse Bunny’s views, his casual misogyny and homophobia wouldn’t have seemed exceptionally out of place in the socially conservative 1980s.

Other Books Related to The Secret History

The Secret History is a foundational work for the “dark academia” aesthetic. Dark academia is a literary subgenre that applies themes and stylings of classical Greek and Gothic arts and architectures to modern college campuses—in some ways, it can be thought of as a contemporary rebranding of Gothic literature. Retroactively, this label has been used to describe Gothic and Romantic works such as Oscar Wilde’s The Picture of Dorian Gray and the poetry of Lord Byron and Percy Bysshe Shelley. More recent works like M. L. Rio’s If We Were Villains and Susanna Clarke’s Piranesi also fall into this subgenre. Like many works that are part of the dark academia canon, The Secret History is inspired by, and makes reference to, a number of Greek epics and tragedies. In particular, Aeschylus’s Agamemnon and Homer’s Odyssey are important influences on and references for Tartt. In addition to her association with dark academia, Tartt is also connected to the “Literary Brat Pack.” The Literary Brat Pack is made up of several writers on the East Coast who became popular in the late 1980s. The primary members of this group are Bret Easton Ellis, Jill Eisenstadt, Jay McInerney, and Tama Janowitz. Many other authors quickly became associated with this group as well, including Tartt, who dedicated The Secret History to Bret Easton Ellis
Key Facts about The Secret History

Extra Credit for The Secret History

Roman à clef? Since the release of The Secret History, many people from Tartt’s college years have come out and claimed that characters in the book are based on them. Although Tartt admits that she took inspiration from her real-life experience at Bennington College, she maintains that her characters are not based on specific people. 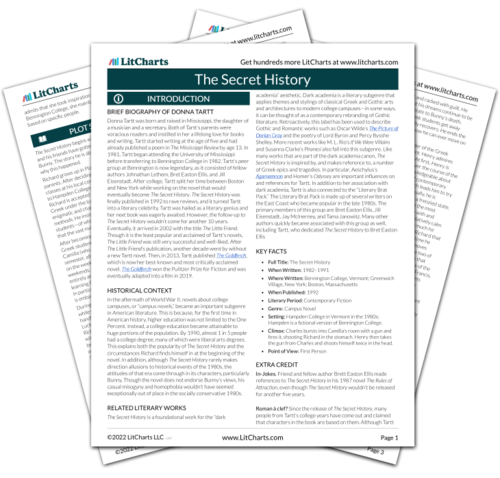 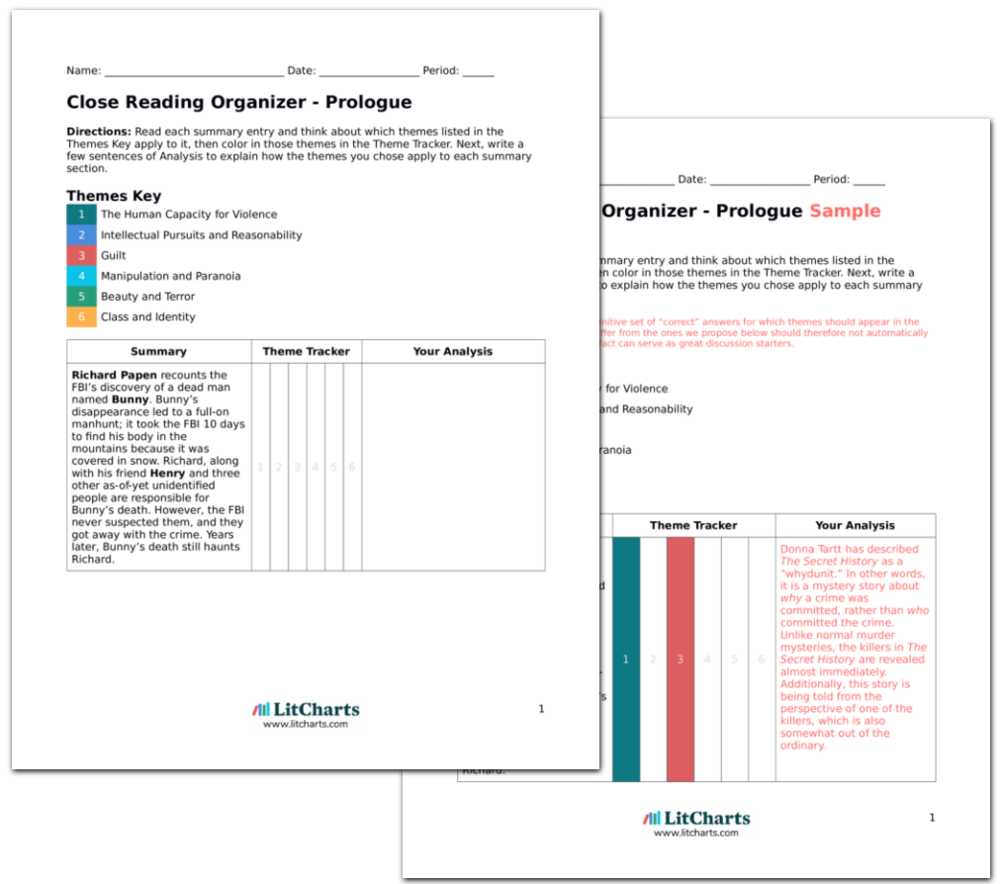