Welcome to the LitCharts study guide on Anonymous's The Song of Roland. Created by the original team behind SparkNotes, LitCharts are the world's best literature guides.

The Song of Roland: Introduction

A concise biography of Anonymous plus historical and literary context for The Song of Roland.

The Song of Roland: Plot Summary

A quick-reference summary: The Song of Roland on a single page.

In-depth summary and analysis of every laisse of The Song of Roland. Visual theme-tracking, too.

The Song of Roland: Themes

Explanations, analysis, and visualizations of The Song of Roland's themes.

The Song of Roland: Quotes

The Song of Roland's important quotes, sortable by theme, character, or laisse.

The Song of Roland: Characters

Description, analysis, and timelines for The Song of Roland's characters.

The Song of Roland: Symbols

Explanations of The Song of Roland's symbols, and tracking of where they appear.

The Song of Roland: Theme Wheel

An interactive data visualization of The Song of Roland's plot and themes.

The author of The Song of Roland is unknown, but the poem has traditionally been attributed to a figure named “Turoldus” because of a name which appears at the end of the Bodleian Library’s Old French manuscript of the poem. However, scholars have never conclusively identified this individual, and indeed there’s no reason to assume that he is the author.
Get the entire The Song of Roland LitChart as a printable PDF.
"My students can't get enough of your charts and their results have gone through the roof." -Graham S.
Download 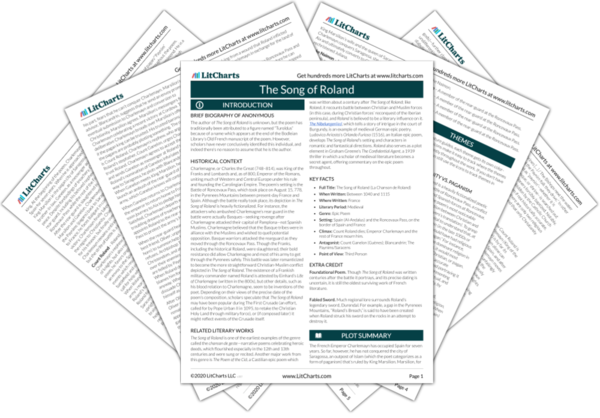 Historical Context of The Song of Roland

Charlemagne, or Charles the Great (748–814), was King of the Franks and Lombards and, as of 800, Emperor of the Romans, uniting much of Western and Central Europe under his rule and founding the Carolingian Empire. The poem’s setting is the Battle of Roncevaux Pass, which took place on August 15, 778, in the Pyrenees Mountains between present-day France and Spain. Although the battle really took place, its depiction in The Song of Roland is heavily fictionalized. For instance, the attackers who ambushed Charlemagne’s rear guard in the battle were actually Basques—seeking revenge after Charlemagne attacked their capital of Pamplona—not Spanish Muslims. Charlemagne believed that the Basque tribes were in alliance with the Muslims and wished to quell potential opposition. Basque warriors attacked the rearguard as they moved through the Roncevaux Pass. Though the Franks, including the historical Roland, were slaughtered, their bold resistance did allow Charlemagne and most of his army to get through the Pyrenees safely. This battle was later romanticized to become the more straightforward Christian-Muslim conflict depicted in The Song of Roland. The existence of a Frankish military commander named Roland is attested by Einhard’s Life of Charlemagne (written in the 800s), but other details, such as his blood relation to Charlemagne, seem to be inventions of the poet. Depending on their views of the precise date of the poem’s composition, scholars speculate that The Song of Roland may have been popular during The First Crusade (an effort, called for by Pope Urban II in 1095, to retake the Christian Holy Land through military force), or (if composed later) it might reflect events of the Crusade itself.

Other Books Related to The Song of Roland

The Song of Roland is one of the earliest examples of the genre called the chanson de geste—narrative poems celebrating heroic deeds, which flourished especially in the 12th and 13th centuries and were sung or recited. Another major work from this genre is The Poem of the Cid, a Castilian epic poem which was written about a century after The Song of Roland; like Roland, it recounts battle between Christian and Muslim forces (in this case, during Christian forces’ reconquest of the Iberian peninsula), and Roland is believed to be a literary influence on it. The Nibelungenlied, which tells a story of intrigue in the court of Burgundy, is an example of medieval German epic poetry. Ludovico Ariosto’s Orlando Furioso (1516), an Italian epic poem, develops The Song of Roland’s setting and characters in romantic and fantastical directions. Roland also serves as a plot element in Graham Greene’s The Confidential Agent, a 1939 thriller in which a scholar of medieval literature becomes a secret agent, offering commentary on the epic poem throughout.
Key Facts about The Song of Roland

Extra Credit for The Song of Roland

Foundational Poem. Though The Song of Roland was written centuries after the battle it portrays, and its precise dating is uncertain, it is still the oldest surviving work of French literature.

Fabled Sword. Much regional lore surrounds Roland’s legendary sword, Durendal. For example, a gap in the Pyrenees Mountains, “Roland’s Breach,” is said to have been created when Roland struck his sword on the rocks in an attempt to destroy it. 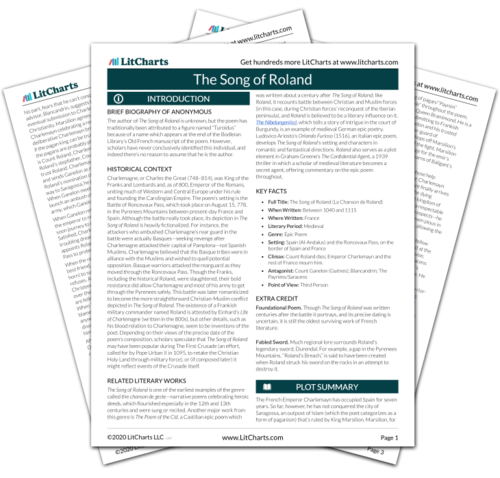 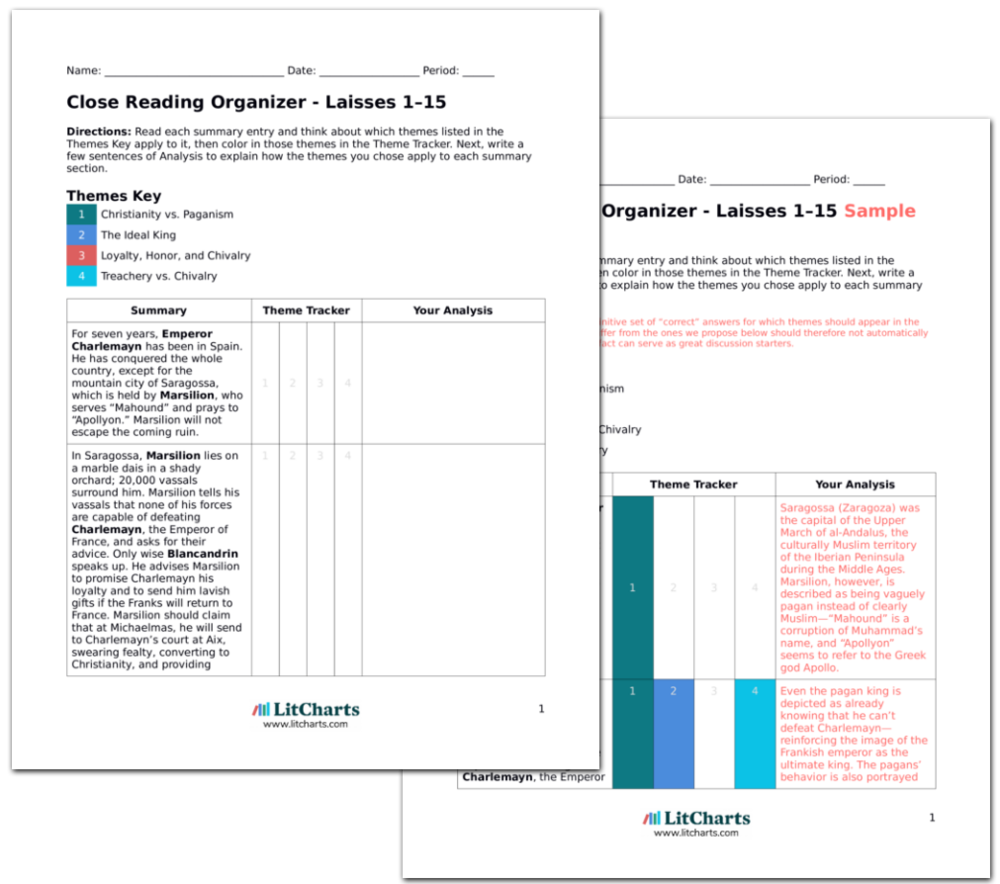