Welcome to the LitCharts study guide on Anonymous's The Nibelungenlied. Created by the original team behind SparkNotes, LitCharts are the world's best literature guides.

A concise biography of Anonymous plus historical and literary context for The Nibelungenlied.

A quick-reference summary: The Nibelungenlied on a single page.

In-depth summary and analysis of every chapter of The Nibelungenlied. Visual theme-tracking, too.

Explanations, analysis, and visualizations of The Nibelungenlied's themes.

The Nibelungenlied's important quotes, sortable by theme, character, or chapter.

Description, analysis, and timelines for The Nibelungenlied's characters.

Explanations of The Nibelungenlied's symbols, and tracking of where they appear.

An interactive data visualization of The Nibelungenlied's plot and themes.

Very little is known about the anonymous author of The Nibelungenlied. Scholars speculate that the author was a professional poet-entertainer in an Austrian court, who had probably learned to read and write in an ecclesiastical context. Scholars also posit that he was probably from the region of Passau, Germany, given that his geographical knowledge is sharper in this area than others. Outside of this, the anonymous poet largely remains a mystery.
Get the entire The Nibelungenlied LitChart as a printable PDF.
"My students can't get enough of your charts and their results have gone through the roof." -Graham S.
Download 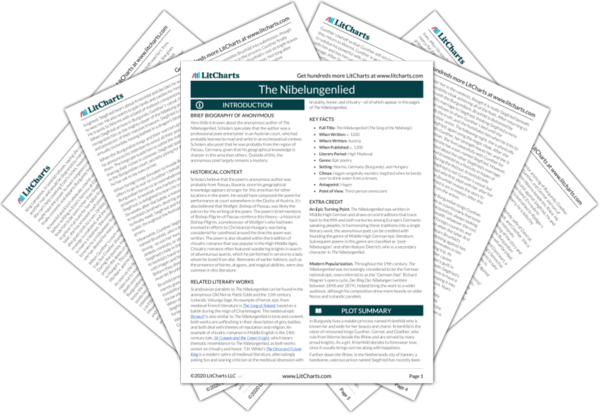 Historical Context of The Nibelungenlied

Scholars believe that the poem’s anonymous author was probably from Passau, Bavaria, since his geographical knowledge appears stronger for this area than for other locations in the poem. He would have composed the poem for performance at court somewhere in the Duchy of Austria. It’s also believed that Wolfger, Bishop of Passau, was likely the patron for the writing of the poem. The poem’s brief mentions of Bishop Pilgrim of Passau reinforce this theory—a historical Bishop Pilgrim, a predecessor of Wolfger’s who had been involved in efforts to Christianize Hungary, was being considered for sainthood around the time the poem was written. The poem is also situated within the tradition of chivalric romance that was popular in the High Middle Ages. Chivalric romance often featured wandering knights in search of adventurous quests, which he performed in service to a lady whom he loved from afar. Remnants of earlier folklore, such as the presence of fairies, dragons, and magical abilities, were also common in this literature.

Other Books Related to The Nibelungenlied

Scandinavian parallels to The Nibelungenlied can be found in the anonymous Old Norse Poetic Edda and the 13th century Icelandic Volsunga Saga. An example of heroic epic from medieval French literature is The Song of Roland, based on a battle during the reign of Charlemagne. The medieval epic Beowulf is also similar to The Nibelungenlied in tone and content; both works are unflinching in their description of gory battles, and both deal with themes of reputation and religion. An example of chivalric romance in Middle English is the 14th century tale, Sir Gawain and the Green Knight, which bears thematic resemblance to The Nibelungenlied, as both works center on chivalry and honor. T.H. White’s The Once and Future King is a modern satire of medieval literature, alternatingly poking fun and searing criticism at the medieval obsession with brutality, honor, and chivalry—all of which appear in the pages of The Nibelungenlied.
Key Facts about The Nibelungenlied

Extra Credit for The Nibelungenlied

An Epic Turning Point. The Nibelungenlied was written in Middle High German and draws on oral traditions that trace back to the fifth and sixth centuries among Europe’s Germanic-speaking peoples. In harmonizing these traditions into a single literary work, the anonymous poet can be credited with founding the genre of Middle High German epic literature. Subsequent poems in this genre are classified as “post-Nibelungian” and often feature Dietrich, who is a secondary character in The Nibelungenlied.

Modern Popularization. Throughout the 19th century, The Nibelungenlied was increasingly considered to be the German national epic, even referred to as the “German Iliad.” Richard Wagner’s opera cycle, Der Ring Des Nibelungen (written between 1848 and 1874), helped bring the work to a wider audience, although his composition drew more heavily on older Norse and Icelandic parallels.