Download this LitChart! (PDF)
Teachers and parents! Struggling with distance learning? Our Teacher Edition on The Sorrow of War can help.

Welcome to the LitCharts study guide on Bảo Ninh's The Sorrow of War. Created by the original team behind SparkNotes, LitCharts are the world's best literature guides.

The Sorrow of War: Introduction

A concise biography of Bảo Ninh plus historical and literary context for The Sorrow of War.

The Sorrow of War: Plot Summary

A quick-reference summary: The Sorrow of War on a single page.

In-depth summary and analysis of every part of The Sorrow of War. Visual theme-tracking, too.

The Sorrow of War: Themes

Explanations, analysis, and visualizations of The Sorrow of War's themes.

The Sorrow of War: Quotes

The Sorrow of War's important quotes, sortable by theme, character, or part.

The Sorrow of War: Characters

Description, analysis, and timelines for The Sorrow of War's characters.

The Sorrow of War: Symbols

Explanations of The Sorrow of War's symbols, and tracking of where they appear.

The Sorrow of War: Theme Wheel

An interactive data visualization of The Sorrow of War's plot and themes.

Bảo Ninh was born in the Vietnamese city of Hanoi in 1952. He experienced the early effects of the Vietnam War, since American air raids started to disrupt everyday life in Hanoi in the mid-1960s. Ninh was directly impacted these air raids, since his school had to be relocated for safety reasons. This experience encouraged him to join the North Vietnamese Army against his parents’ wishes, since they wanted him to go to college instead of putting his life at risk as a soldier. Still, Ninh was set on joining the army, wanting to be admirable and honorable by defending his country. He ended up joining the Glorious 27th Youth Brigade in 1969 and was one of only 10 soldiers from the brigade to survive the war—out of 500. He turned to writing in the aftermath of the war, penning The Sorrow of War as part of his studies at the Nguyen Du Writing School. The book circulated throughout Vietnam as a limited-run, underground publication before it was translated into English. It was eventually published abroad, but the novel was banned in Vietnam by the Communist Party of Vietnam until 2006.
Get the entire The Sorrow of War LitChart as a printable PDF.
"My students can't get enough of your charts and their results have gone through the roof." -Graham S.
Download 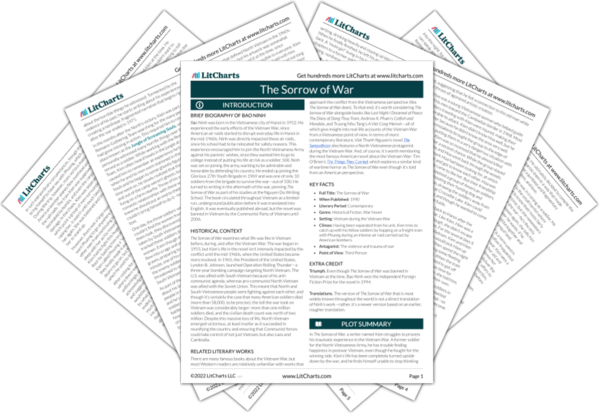 Historical Context of The Sorrow of War

The Sorrow of War examines what life was like in Vietnam before, during, and after the Vietnam War. The war began in 1955, but Kien’s life in the novel isn’t intensely impacted by the conflict until the mid-1960s, when the United States became more involved. In 1965, the President of the United States, Lyndon B. Johnson, launched Operation Rolling Thunder—a three-year bombing campaign targeting North Vietnam. The U.S. was allied with South Vietnam because of its anti-communist agenda, whereas pro-communist North Vietnam was allied with the Soviet Union. This meant that North and South Vietnamese people were fighting against each other, and though it’s certainly the case that many American soldiers died (more than 58,000, to be precise), the toll the war took on Vietnam was considerably larger: more than one million soldiers died, and the civilian death count was north of two million. Despite this massive loss of life, North Vietnam emerged victorious, at least insofar as it succeeded in reunifying the country and ensuring that Communist forces could take control of not just Vietnam, but also Laos and Cambodia.

Other Books Related to The Sorrow of War

Extra Credit for The Sorrow of War

Triumph. Even though The Sorrow of War was banned in Vietnam at the time, Bao Ninh won the Independent Foreign Fiction Prize for the novel in 1994.

Translations. The version of The Sorrow of War that is most widely known throughout the world is not a direct translation of Ninh’s work—rather, it’s a newer version based on an earlier, rougher translation. 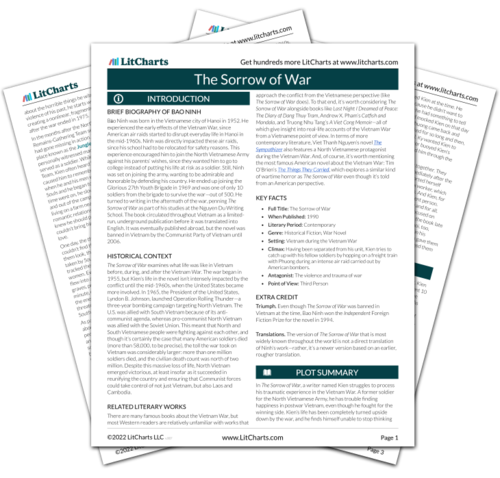 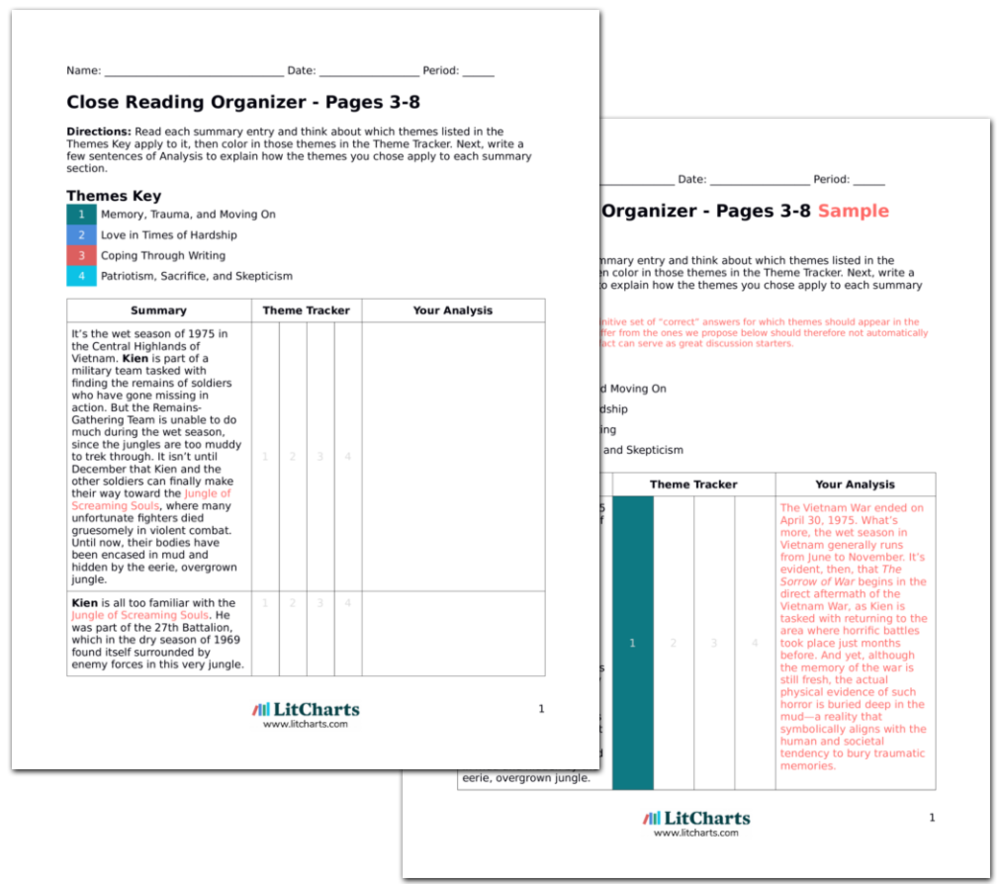