We the Animals
Introduction + Context
Plot Summary
Detailed Summary & Analysis
1. We Wanted More 2. Never-Never Time 3. Heritage 4. Seven 5. The Lake 6. Us Proper 7. Lina 8. Other Locusts 9. Talk To Me 10. You Better Come 11. Night Watch 12. Big-Dick Truck 13. Ducks 14. Trench 15. Trash Kites 16. Wasn’t No One To Stop This 17. Niagara 18. The Night I Am Made 19. Zookeeping
Themes
All Themes Identity and Belonging Violence, Aggression, and Love Support and Caretaking Masculinity and Coming of Age
Quotes
Characters
All Characters The Narrator Ma Paps Manny Joel Lina Old Man The Headbanger The Bus Driver
Symbols
All Symbols Animals Paps’s Truck

Download this LitChart! (PDF)
Teachers and parents! Struggling with distance learning? Our Teacher Edition on We the Animals can help.

Welcome to the LitCharts study guide on Justin Torres's We the Animals. Created by the original team behind SparkNotes, LitCharts are the world's best literature guides.

We the Animals: Introduction

A concise biography of Justin Torres plus historical and literary context for We the Animals.

We the Animals: Plot Summary

A quick-reference summary: We the Animals on a single page.

We the Animals: Detailed Summary & Analysis

In-depth summary and analysis of every chapter of We the Animals. Visual theme-tracking, too.

We the Animals: Themes

Explanations, analysis, and visualizations of We the Animals's themes.

We the Animals: Quotes

We the Animals's important quotes, sortable by theme, character, or chapter.

We the Animals: Characters

Description, analysis, and timelines for We the Animals's characters.

We the Animals: Symbols

Explanations of We the Animals's symbols, and tracking of where they appear.

We the Animals: Theme Wheel

An interactive data visualization of We the Animals's plot and themes.

Justin Torres was born in New York City but grew up in upstate New York in a town called Baldwinsville. The youngest of three brothers, he is of Puerto Rican descent and came out as gay when he was a teenager, an experience he writes about in his debut novel, We The Animals, which is semi-autobiographical. He attended New York University as a young man, though he soon dropped out and traveled around the United States. During this period, he worked odd jobs before sitting in on a writing class at The New School back in New York City. After this experience, he decided to concentrate on his writing. He subsequently attended the Iowa Writers’ Workshop, receiving his Masters in Fine Arts in 2010, at which point he became a Stegner Fellow at Stanford University. It was during this time that he published We The Animals, which won an Indies Choice Book Award and was a finalist for a Publishing Triangle Award and an NAACP Image Award. He now teaches in the English department at the University of California, Los Angeles.
Get the entire We the Animals LitChart as a printable PDF.
"My students can't get enough of your charts and their results have gone through the roof." -Graham S.
Download 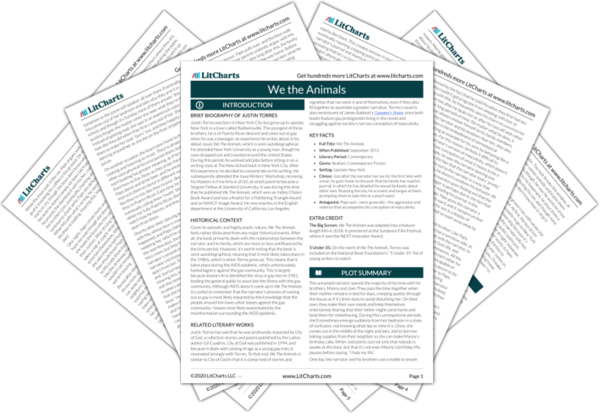 Historical Context of We the Animals

Given its episodic and highly poetic nature, We The Animals feels rather dislocated from any major historical events. After all, the book primarily deals with the relationships between the narrator and his family, which are more or less uninfluenced by the time period. However, it’s worth noting that the book is semi-autobiographical, meaning that it most likely takes place in the 1980s, which is when Torres grew up. This means that it takes place during the AIDS epidemic, which unfortunately fueled bigotry against the gay community. This is largely because doctors first identified the virus in gay men in 1981, leading the general public to associate the illness with the gay community. Although AIDS doesn’t come up in We The Animals, it’s useful to remember that the narrator’s process of coming out as gay is most likely impacted by the knowledge that the people around him have unfair biases against the gay community—biases most likely exacerbated by the misinformation surrounding the AIDS epidemic.

Other Books Related to We the Animals

Justin Torres has said that he was profoundly impacted by City of God, a collection stories and poems published by the Latino author Gil Cuadros. City of God was published in 1994, and because it deals with coming of age as a young gay man, it resonated strongly with Torres. To that end, We The Animals is similar to City of God in that it is comprised of stories and vignettes that can exist in and of themselves, even if they also fit together to assemble a greater narrative. Torres’s novel is also reminiscent of James Baldwin’s Giovanni’s Room, since both books feature gay protagonists living in the closet and struggling against society’s narrow conception of masculinity.
Key Facts about We the Animals

Extra Credit for We the Animals

The Big Screen. We The Animals was adapted into a feature-length film in 2018. It premiered at the Sundance Film Festival, where it won the NEXT Innovator Award.

5 Under 35. On the merit of We The Animals, Torres was included on the National Book Foundation’s “5 Under 35” list of young writers to watch. 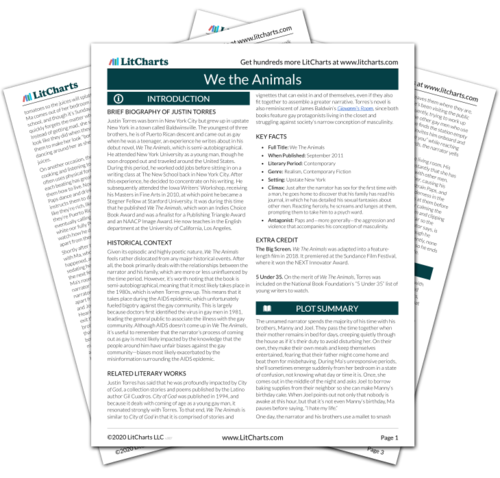 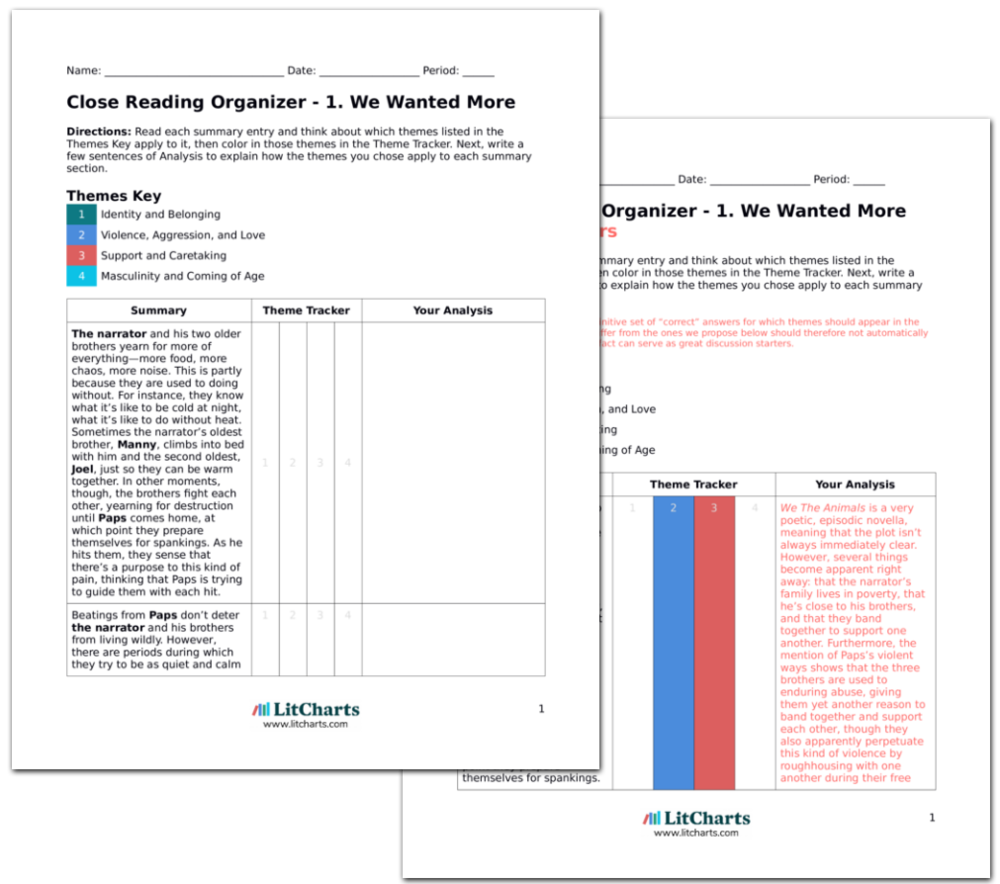