Download this LitChart! (PDF)
Teachers and parents! Struggling with distance learning? Our Teacher Edition on Woman at Point Zero can help.

Welcome to the LitCharts study guide on Nawal El Saadawi's Woman at Point Zero. Created by the original team behind SparkNotes, LitCharts are the world's best literature guides.

A concise biography of Nawal El Saadawi plus historical and literary context for Woman at Point Zero.

A quick-reference summary: Woman at Point Zero on a single page.

In-depth summary and analysis of every chapter of Woman at Point Zero. Visual theme-tracking, too.

Explanations, analysis, and visualizations of Woman at Point Zero's themes.

Description, analysis, and timelines for Woman at Point Zero's characters.

Explanations of Woman at Point Zero's symbols, and tracking of where they appear.

An interactive data visualization of Woman at Point Zero's plot and themes.

Saadawi was born the second of nine children, to a family that was progressive, yet slave to certain traditions. At six years old, her father had her circumcised yet also provided her an education and encouraged her to think and speak forthrightly. Both of Sadaawi’s parents died early, leaving her as the sole guardian for her younger siblings. Saadawi studied in Cairo, where she graduated as a doctor in 1955. As a physician, she realized that many women’s physical and psychological ills were rooted in class oppression and gendered oppression. After two brief marriages, she married a prominent communist activist in 1964, whom had previously spent 13 years as a political prisoner. In 1972, while working as a public health director and editor of a prominent health journal, Saadawi published Women and Sex, which catalogued the various ways that patriarchal society dominates women and violates their personal agency. Although the controversial feminist book was widely successful in Egypt and abroad, it cost Saadawi both her directorship and the journal. Saadawi then transitioned to researching women’s neurosis for a prominent medical university, and then served as an adviser for the United Nations. During this time, she wrote and published Woman at Point Zero based upon meeting Firdaus as a part of Saadawi’s case studies of women at Qanatir Prison. In 1981, Saadawi helped launch the feminist magazine Confrontation, which led President Anwar Sadat—who had already considered Saadawi a dangerous public figure—to order Saadawi’s arrest. She spent one year in Qanatir Prison—the same prison she wrote about in Woman at Point Zero in 1975—but was released after military officers assassinated Sadat. Saadawi continued her activism in Egypt until 1988, until Islamists threatened her life. She took sanctuary in the U.S., teaching at several prestigious universities until she could return to Egypt in 1996. Back in her home country, Saadawi continued her activism. She ran for president in 2005, protested in Tahrir Square in 2011—an event which triggered the Egyptian Revolution and downfall of President Hosni Mubarak—and campaigned for the secularization of public education in Egypt. Saadawi has two children, and divorced her third husband in 2010.
Get the entire Woman at Point Zero LitChart as a printable PDF.
"My students can't get enough of your charts and their results have gone through the roof." -Graham S.
Download 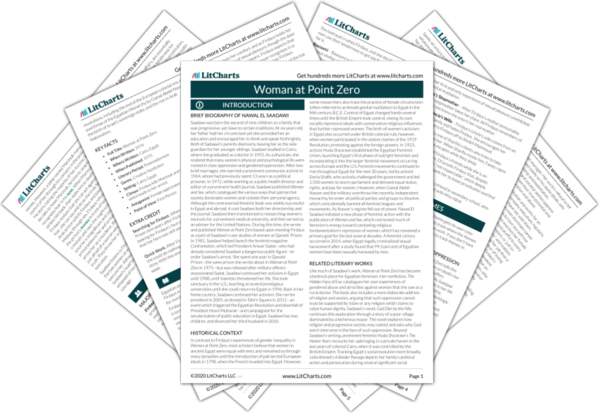 In contrast to Firdaus’s experiences of gender inequality in Woman at Point Zero, most scholars believe that women in ancient Egypt were equal with men, and remained so through many dynasties until the introduction of patriarchal European ideals in 1798, when the French invaded into Egypt. However, some researchers also trace the practice of female circumcision (often referred to as female genital mutilation) to Egypt in the fifth century B.C.E. Control of Egypt changed hands several times until the British Empire took control, mixing its own socially repressive ideals with conservative religious influences that further repressed women. The birth of women’s activism in Egypt also occurred under British colonial rule, however, when women participated in the violent clashes of the 1919 Revolution, protesting against the foreign powers. In 1923, activist Huda Sha’arawi established the Egyptian Feminist Union, launching Egypt’s first phase of outright feminism and incorporating it into the larger feminist movement occurring across Europe and the U.S. Feminist movements continued to rise throughout Egypt for the next 30 years, led by activist Doria Shafik, who actively challenged the government and led 1,500 women to storm parliament and demand equal status, rights, and pay for women. However, when Gamal Abdel Nasser and the military overthrow the recently-independent monarchy, he order all political parties and groups to dissolve, which coincidentally banned all feminist leagues and movements. As Nasser’s regime fell out of power, Nawal El Saadawi initiated a new phase of feminist action with the publication of Women and Sex, which reoriented much of feminism’s energy toward combating religious fundamentalism’s repression of women, which has remained a primary goal for the last several decades. A feminist victory occurred in 2014, when Egypt legally criminalized sexual harassment after a study found that 99.3 percent of Egyptian women have been sexually harassed by men.

Other Books Related to Woman at Point Zero

Like much of Saadawi’s work, Woman at Point Zero has become a bedrock piece for Egyptian feminism. Her nonfiction, The Hidden Face of Eve, catalogues her own experiences of gendered abuse and atrocities against woman that she saw as a rural doctor. The book also includes a more elaborate address of religion and sexism, arguing that such oppression cannot truly be supported by Islam or any religion which claims to value human dignity. Sadaawi’s novel, God Dies by the Nile, continues this exploration through a story of a poor village dominated by a lecherous mayor. The novel explores how religion and progressive society may coexist and asks why God won’t intervene in the face of such oppression. Beyond Saadawi’s writing, prominent feminist Huda Sha’arawi’s The Harem Years recounts her upbringing in a private harem in the last years of colonial Cairo, when it was controlled by the British Empire. Tracking Egypt’s social evolution more broadly, Leila Ahmed’s A Border Passage depicts her family’s political action and persecution during several significant social revolutions, including the end of the European colonial era, the overthrow of the Egyptian Monarchy by Gamal Abdel Nasser, the birth of Israel’s sovereign state, and the rise in Arab Nationalism.
Key Facts about Woman at Point Zero

Searching for Firdaus. When Saadawi was thrown in Qanatir Prison nine years after Firdaus’s death, she often found herself looking for Firdaus’s face amongst the other inmates, wishing that her hero was still somehow alive.

Quick Work. After Firdaus was executed in 1974, Saadawi felt she could do nothing else until she’d immortalized Firdaus’s story. With this energy, she wrote Woman at Point Zero in one week. 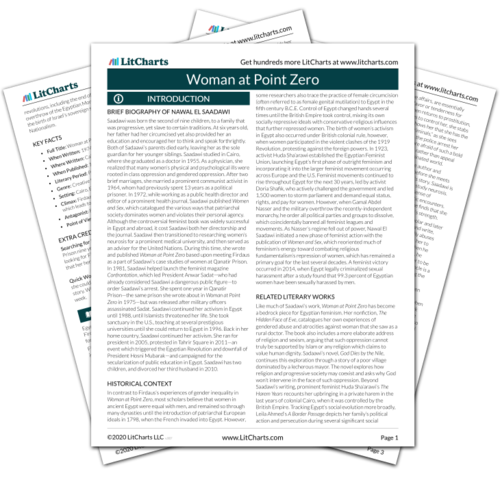 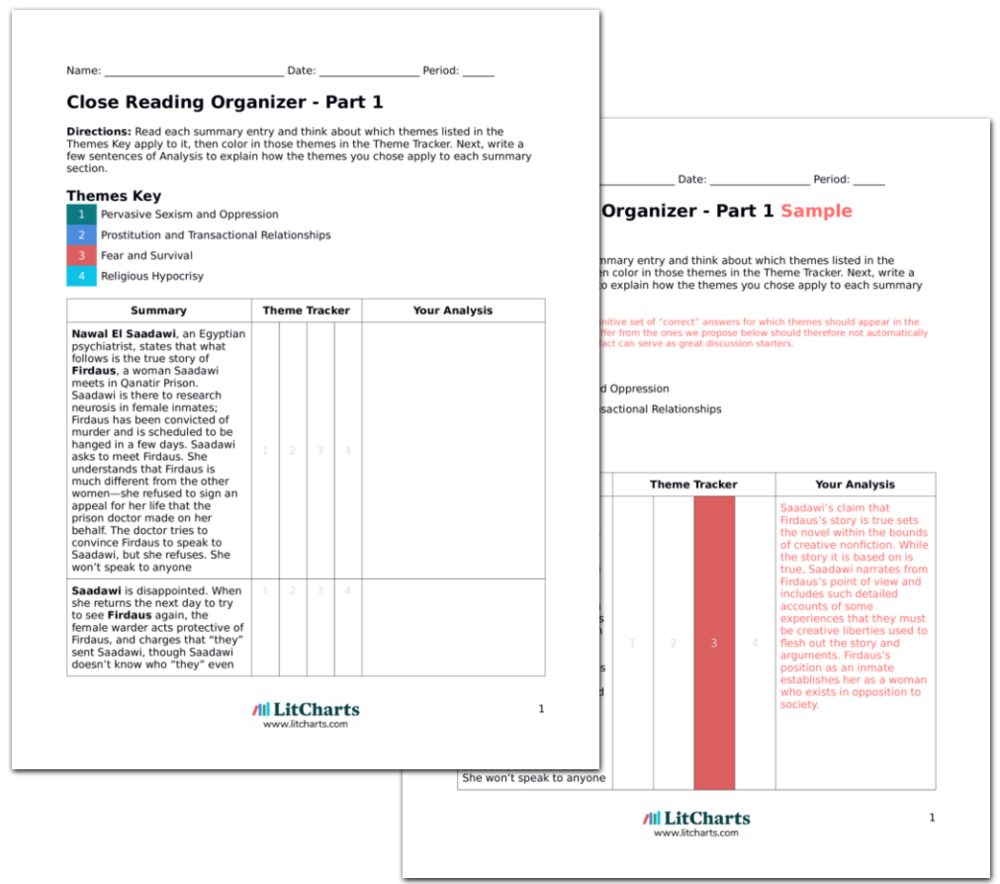