Download this LitChart! (PDF)
Teachers and parents! Struggling with distance learning? Our Teacher Edition on A Thousand Years of Good Prayers can help.

Welcome to the LitCharts study guide on Yiyun Li's A Thousand Years of Good Prayers. Created by the original team behind SparkNotes, LitCharts are the world's best literature guides.

A concise biography of Yiyun Li plus historical and literary context for A Thousand Years of Good Prayers.

A quick-reference summary: A Thousand Years of Good Prayers on a single page.

In-depth summary and analysis of every of A Thousand Years of Good Prayers. Visual theme-tracking, too.

Explanations, analysis, and visualizations of A Thousand Years of Good Prayers's themes.

A Thousand Years of Good Prayers's important quotes, sortable by theme, character, or .

Description, analysis, and timelines for A Thousand Years of Good Prayers's characters.

Explanations of A Thousand Years of Good Prayers's symbols, and tracking of where they appear.

An interactive data visualization of A Thousand Years of Good Prayers's plot and themes.

Yiyun Li was born and raised in Beijing, China during the height of the country’s Cultural Revolution. She earned a bachelor’s degree at Peking University, and soon after graduating from college, she moved to the United States where she received a degree in immunology from the University of Iowa. Five years later, in 2005, she earned a Master of Fine Arts in creative nonfiction and fiction writing from the Iowa Writers’ Workshop. She has published multiple books, including five novels, two collections of short stories, and one memoir. She has also published reporting and nonfiction writing in magazines. Li has received numerous awards for her writing, including a MacArthur Foundation Fellowship and a Guggenheim Fellowship. She is currently a professor of creative writing at Princeton University.
Get the entire A Thousand Years of Good Prayers LitChart as a printable PDF.
"My students can't get enough of your charts and their results have gone through the roof." -Graham S.
Download 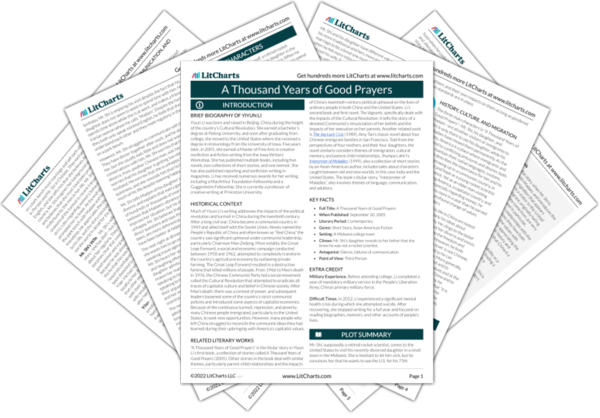 Historical Context of A Thousand Years of Good Prayers

Much of Yiyun Li’s writing addresses the impacts of the political revolution and turmoil in China during the twentieth century. After a long civil war, China became a communist country in 1949 and allied itself with the Soviet Union. Newly named the People’s Republic of China and often known as “Red China,” the country saw significant upheaval under communist leadership, particularly Chairman Mao Zedong. Most notably, the Great Leap Forward, a social and economic campaign conducted between 1958 and 1962, attempted to completely transform the country’s agricultural economy by outlawing private farming. The Great Leap Forward resulted in a destructive famine that killed millions of people. From 1966 to Mao’s death in 1976, the Chinese Communist Party led a social movement called the Cultural Revolution that attempted to eradicate all traces of capitalist culture and belief in Chinese society. After Mao’s death, there was a contest of power, and subsequent leaders loosened some of the country’s strict communist policies and introduced some aspects of capitalist economics. Because of the continuous turmoil, repression, and poverty, many Chinese people immigrated, particularly to the United States, to seek new opportunities. However, many people who left China struggled to reconcile the communist ideas they had learned during their upbringing with America’s capitalist values.

Other Books Related to A Thousand Years of Good Prayers

“A Thousand Years of Good Prayers” is the titular story in Yiyun Li’s first book, a collection of stories called A Thousand Years of Good Prayers (2005). Other stories in the book deal with similar themes, particularly parent-child relationships and the impacts of China’s twentieth-century political upheaval on the lives of ordinary people in both China and the United States. Li’s second book and first novel, The Vagrants, specifically deals with the impacts of the Cultural Revolution: it tells the story of a devoted Communist’s renunciation of her beliefs and the impacts of her execution on her parents. Another related work is The Joy Luck Club (1989), Amy Tan’s classic novel about four Chinese immigrant families in San Francisco. Told from the perspectives of four mothers and their four daughters, the novel similarly considers themes of immigration, cultural memory, and parent-child relationships. Jhumpa Lahiri’s Interpreter of Maladies (1999), also a collection of short stories by an Asian-American author, includes tales about characters caught between old and new worlds, in this case India and the United States. The book’s titular story, “Interpreter of Maladies,” also involves themes of language, communication, and adultery.
Key Facts about A Thousand Years of Good Prayers

Extra Credit for A Thousand Years of Good Prayers

Difficult Times. In 2012, Li experienced a significant mental health crisis during which she attempted suicide. After recovering, she stopped writing for a full year and focused on reading biographies, memoirs, and other accounts of people’s lives. 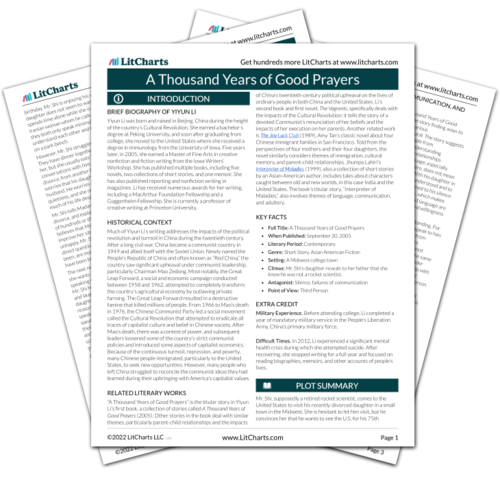 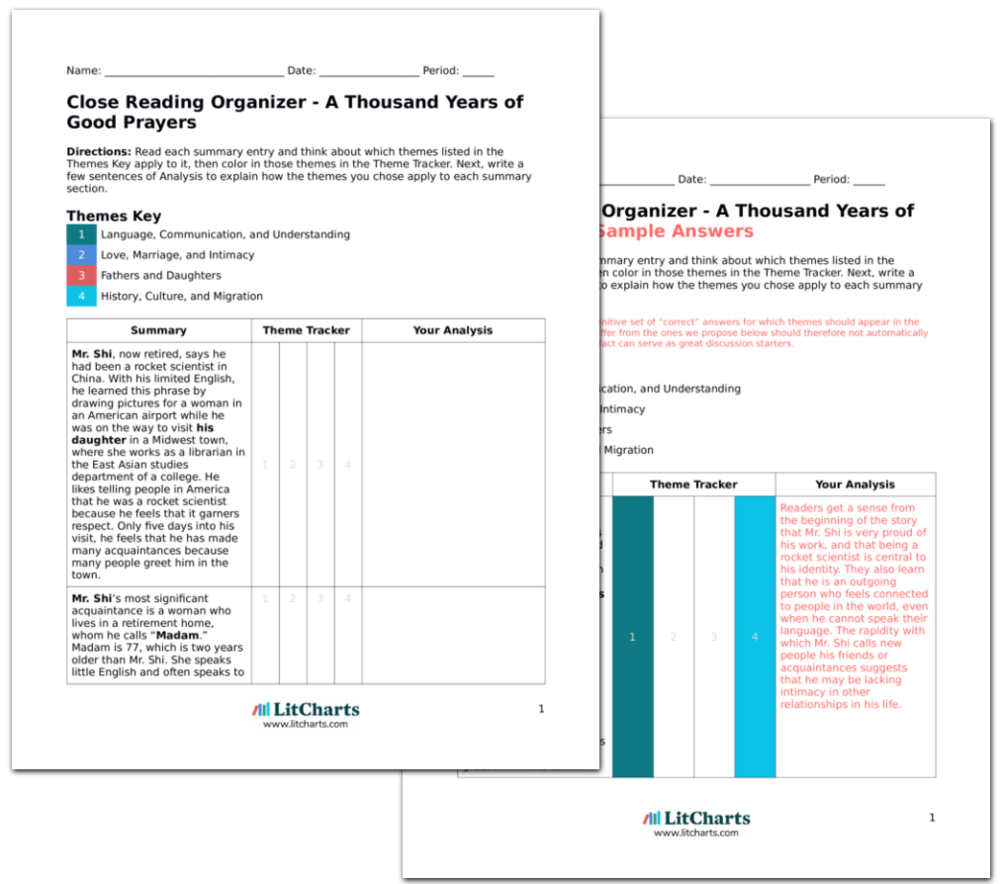