Download this LitChart! (PDF)
Teachers and parents! Struggling with distance learning? Our Teacher Edition on Blindness can help.

Welcome to the LitCharts study guide on José Saramago's Blindness. Created by the original team behind SparkNotes, LitCharts are the world's best literature guides.

A concise biography of José Saramago plus historical and literary context for Blindness.

A quick-reference summary: Blindness on a single page.

In-depth summary and analysis of every chapter of Blindness. Visual theme-tracking, too.

Explanations of Blindness's symbols, and tracking of where they appear.

An interactive data visualization of Blindness's plot and themes.

José Saramago was born to a poor family and raised primarily in Lisbon, where his father was a low-ranking police officer in the administration of dictator António Salazar. Saramago also frequently visited his grandparents in the rural village where he was born—he cited his grandfather, an illiterate pig farmer, as the greatest influence on his writing. Although Saramago excelled in school, as a teenager he was forced to switch to a technical education; he became a car mechanic, although he read avidly in his free time. He married the engraver Ilda Reis, and they had one daughter in 1947—the same year that Saramago published his first novel, The Land of Sin. Though Saramago wrote sporadically over the next decade, he did not publish anything else until nearly 20 years later. Instead, he continued to move through different various trades as well as careers in the publishing industry. In 1974, socialist revolutionaries successfully toppled Portugal’s authoritarian regime, and Saramago, a communist, was made director of a prominent national newspaper. However, the next year, backlash to this revolution led to Saramago’s firing. Although Saramago was devastated, the experience persuaded him to focus on novel-writing. In the 1980s, he won widespread acclaim for a string of prominent books: Baltazar and Blimunda, The Year of the Death of Ricardo Reis, The Stone Raft, and The History of the Siege of Lisbon. In 1991, Saramago’s novel The Gospel According to Jesus Christ raised significant controversy: the Catholic Church officially denounced Saramago, and the Portuguese government formally withdrew his name from consideration for the European Literary Prize. In protest, Saramago left Portugal and moved to the Canary Islands, where he went on to live the rest of his life with his second wife, Pilar del Río. In the last two decades of his life, Saramago published more than a dozen more novels. In 1995, in addition to publishing Blindness, Saramago won the Camões Prize, the most important prize for Portuguese-language literature. In 1998, Saramago also became the first Portuguese-language writer to win the Nobel Prize for Literature. Saramago died in 2010 of leukemia.
Get the entire Blindness LitChart as a printable PDF.
"My students can't get enough of your charts and their results have gone through the roof." -Graham S.
Download 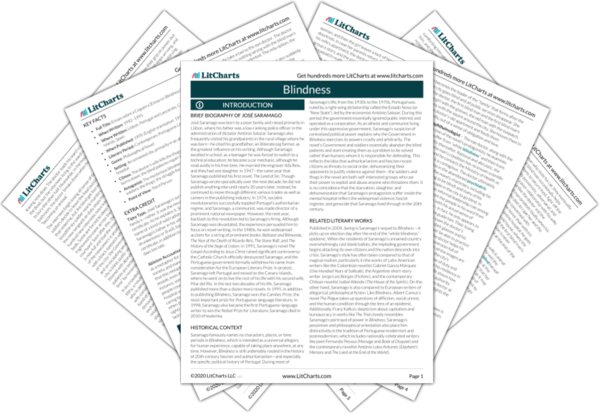 Saramago famously names no characters, places, or time periods in Blindness, which is intended as a universal allegory for human experience, capable of taking place anywhere, at any time. However, Blindness is still undeniably rooted in the history of 20th-century fascism and authoritarianism—and especially the specific political history of Portugal. During most of Saramago’s life, from the 1930s to the 1970s, Portugal was ruled by a right-wing dictatorship called the Estado Novo (or “New State”), led by the economist António Salazar. During this period, the government essentially ignored public interest and operated as a corporation. As an atheist and communist living under this oppressive government, Saramago’s suspicion of centralized political power explains why the Government in Blindness exercises its powers cruelly and arbitrarily. The novel’s Government and soldiers essentially abandon the blind patients and start treating them as a problem to be solved rather than humans whom it is responsible for defending. This reflects the idea that authoritarianism and fascism recast citizens as threats to social order, dehumanizing their opponents to justify violence against them—the soldiers and thugs in the novel are both self-interested groups who use their power to exploit and abuse anyone who threatens them. It is no coincidence that the starvation, slaughter, and dehumanization that Saramago’s protagonists suffer inside the mental hospital reflect the widespread violence, fascist regimes, and genocide that Saramago lived through in the 20th century.

Other Books Related to Blindness

Published in 2004, Seeing is Saramago’s sequel to Blindness —it picks up on election day after the end of the “white blindness” epidemic. When the residents of Saramago’s unnamed country overwhelmingly cast blank ballots, the imploding government begins attacking its own citizens and the nation descends into crisis. Saramago’s style has often been compared to that of magical realism, particularly in the works of Latin American writers like the Colombian novelist Gabriel García Márquez (One Hundred Years of Solitude), the Argentine short-story writer Jorge Luis Borges (Fictions), and the contemporary Chilean novelist Isabel Allende (The House of the Spirits). On the other hand, Saramago is also compared to European writers of allegorical, philosophical fiction. Like Blindness, Albert Camus’s novel The Plague takes up questions of affliction, social unrest, and the human condition through the lens of an epidemic. Additionally, Franz Kafka’s skepticism about capitalism and bureaucracy in works like The Trial closely resembles Saramago’s portrayal of power in Blindness. Saramago’s pessimism and philosophical orientation also place him distinctively in the tradition of Portuguese modernism and postmodernism, which includes nationally-celebrated writers like poet Fernando Pessoa (Message and Book of Disquiet) and the contemporary novelist António Lobo Antunes (Elephant’s Memory and The Land at the End of the World).
Key Facts about Blindness

Tipsy Typo. José Saramago’s surname is not his family’s—rather, it was the result of an error on his birth certificate. As he explains it, Saramago, which is the Portuguese name of a kind of wild radish, “was an insulting nickname” for Saramago’s father in his village. But the village’s clerk, out of drunkenness or ill will, listed this as José’s surname on his birth certificate, in addition to incorrectly listing his birthdate two days too late.

Ableism Accusations. Saramago predominantly uses blindness as a metaphor for central problems in human psychology and society, and many critics from disability studies have suggested that this metaphor perpetuates harmful ideas about blind people, even if this was never Saramago’s intention. For instance, some have argued that Saramago’s depiction of blind people covered in their own filth in the quarantined mental hospital wrongly suggests that blind people are incapable of caring for themselves, or that his characters’ sense of despair when they are struck blind (and ecstasy when they regain their sight) puts forth the notion that blind people are somehow lacking in humanity or are inferior to sighted people. 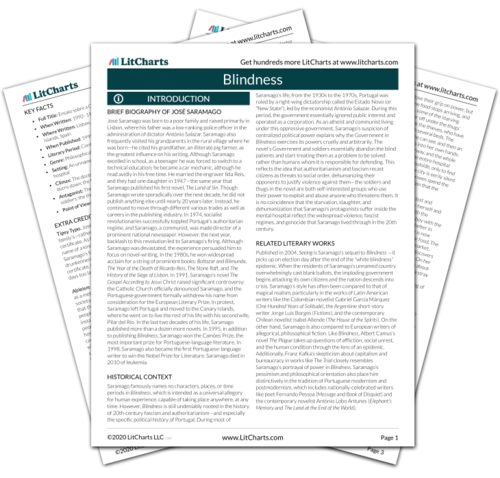 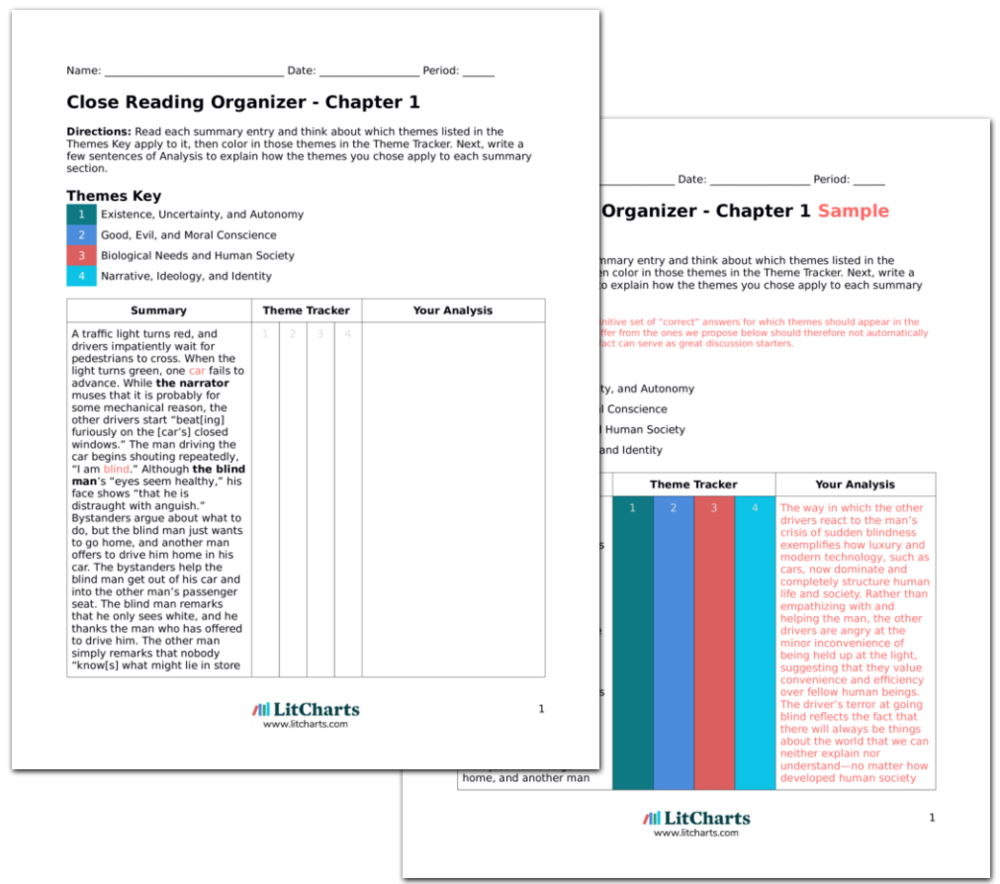